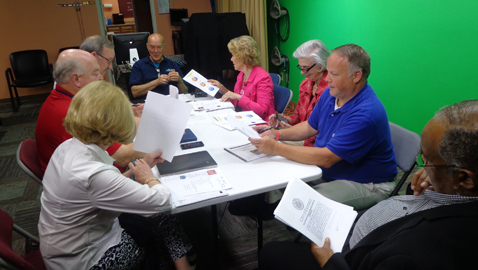 The Community Television Board of Knoxville met Tuesday for its quarterly session and heard Ron Mills, with the City Law Office, inform them of the Open Meeting law. Members of the Law Office have been attending various city meetings to remind them that all meetings are, or should be, open to the public, have adequate public notice, and that board members should not speak of board business outside of meetings.

Mills also said that the public “has a right to hear” any public proceedings but does not, without an invitation or a public forum, have the right to speak at meetings.

CTV General Manager David Vogel then opened the meeting. He said CTV will be requesting about 2% more for the upcoming annual budget and told the members, “We have not spent more than we’ve taken in” during the current year.

He said CTV has updated its playback equipment this year and next year is looking at updating the cameras in the City-County Building. He said that in January and February coverage of two city council meetings were missed because of troubles at the city-county website. He also said revenue was down in the current year because of cable company payments to CTV and said he is talking to the systems.

Vogel emphasized CTV’s Golden Reflections projects in which the memories of elderly people are being recorded and stored.

He also reminded the board of the upcoming Summer Camps for 6th and 8th grade students who want to create a documentary. Those camps are held at CTV Headquarters at 808 State Street and run June 8-12 and June 22-26. There’s a $25 materials cost and the registration deadline is June 1.

Summer Camp for Advanced Documentary Workshop for 9th through 12th graders will be held July 6- 10 and July 20-24, also with a $25 materials fee. The deadline for application is July 1.

Each session is limited to eight participants and registration can be done online at www.huntersmoon.org or by calling (865)215-8848 for more information.

The CTV Board also discussed “outside programming” and Vogel said that programs to be aired but produced outside the area must have a local producer. He also said that 10% of the programming on CTV locally can be a paid sponsor show.

On October 2 CTV will celebrate 40 years of offering local programming to Knoxville and Knox County. Vogel took over directorship of CTV in 1991.

The next CTV Board meeting is scheduled for September 15.