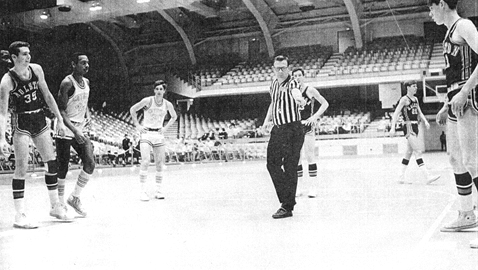 Doyle Human steps into the free throw lane at Stokely Athletics Center to administer foul shots in a high school basketball game between Holston and Catholic, prior to a UT Orange and White game. Human will be inducted into the Greater Knoxville Sports Hall of Fame Thursday night as an official.

By Steve WIlliams
When Doyle Human came to his first meeting of the East Tennessee Federation of Umpires in 1962, one veteran official got even.
“As I walked down the aisle,” recalled Human last week, “Joe Caldwell stopped everything and said, ‘For all you fellows that don’t know that guy walking down the aisle there, that’s Doyle Human. He’s going to be the best umpire we’ve ever had. He’s better at calling strikes from center field than I am behind the plate.’
“Everybody got a big kick out of that.”
Human, then 27, had just been initiated into the world of officiating. Doyle probably figured he had it coming. After all, as a ball player coming up, and one that played with a chip on his shoulder because of his lack of size, he admits he didn’t care for the men in stripes or blue.
“The strange thing about me getting into officiating,” said Human, “when I was growing up playing ball, I was so small I felt like I had to play harder in order to compete. I thought the officials, the referees and the umpires were always against me, if something didn’t go my way. And I hated them. I hated all the officials I ever played under. Then all of a sudden I became one. And ended up, I think, being a pretty good one, apparently.”
Human, indeed, was one of the best sports officials this area has produced, and he will be inducted into the Greater Knoxville Sports Hall of Fame Thursday night (July 11) at the Knoxville Convention Center.
Human, 78, was a basketball and football official in the Tennessee Secondary Schools Athletic Association for 30 years, working in two state basketball tournaments, 1970 and 1974, and two state football championship games. He also was a TSSAA baseball umpire and officiated baseball and softball for 14 years. Hip problems, he said, forced him to call it quits in 1992.
Human had been an outstanding athlete at Rule High School, despite his small size. In fact, the 5-7, 135-pound senior quarterback was named the Knoxville Quarterback Club’s first-ever Back of the Year in Knoxville in 1952, as he led the Golden Bears to the City championship and a berth in the Meninak Bowl in Jacksonville, Fla. Andrew Jackson High, with superior size and depth, rolled to a 40-0 win at Gator Bowl Stadium.
Doyle also played safety and was the last high school player in this area to dropkick extra points.
He also was All-City in basketball his senior year and was one of Rule’s top baseball players, helping lead the Bears to an 11-0 record before they lost at Johnson City 1-0 in the East Tennessee Regional tournament his sophomore season.
“It was quite a turnaround once I started officiating,” said Human. “I found out that officials weren’t always wrong, naturally.
“Officiating was a lot tougher than I thought it would be, a lot tougher. But you know what, I think if you enjoy something as much as I did officiating, you make it easier. I worked hard to be a good official. I didn’t want somebody yelling at me. As long as they’d let me work my ball game, and they do the coaching, we never had any trouble.”
Human also did some coaching before he started blowing the whistle and calling balls and strikes. He coached the Rule Midget football team for six years, compiling a 39-7 record.
As a football official, Human worked in Dr. Bill Battle’s crew for 18 years. In 1987, he received the Ed Harris Memorial Award, voted on by his peers, as the top Head Linesman in the Knoxville Football Officials Association, and in 2001 the KFOA inducted him into its Hall of Fame.
Human still remembers working the 1974 state basketball tourney in Memphis, particularly a semifinal showdown between Memphis Melrose and Nashville Hillsboro. “We had one of the best games I was ever involved in that night,” he said.
A letter, dated March 26, 1974, sent to Human from a losing coach after the ‘74 state tourney was very complimentary. It read: “Dear Doyle: I just wanted to say that I thought you did a fine job during the recent tournament. I appreciate men who have the courage to officiate and to “Call it like it is.” Keep up the good work. Sincerely, Ken, K. W. Head, David Lipscomb High School, Basketball coach.”
In addition to his athletic talents in high school, Human also built a fishing boat in Rule’s workshop under the guidance of instructor Harold White. That led to his employment at Plasti-Line Inc., where he was hired in as a mold maker August 10, 1953 and retired as a Plant Manufacturing Engineer March 31, 1999.
Doyle and the former Jeanette Bailey will celebrate 60 years of marriage July 18. They have a daughter, Vicki, and a son, Fred Doyle, Jr., and two grandsons, Brad and Matthew Dake.