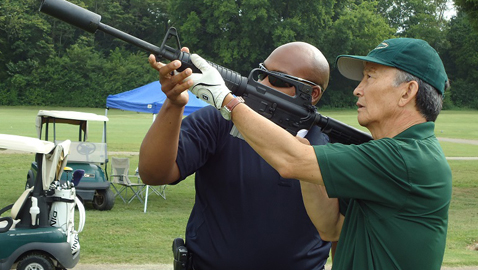 Dr. Kim tries out the rifle shot at his 2013 tournament.

For more than two decades Dr. Tom Kim has been providing free medical care for working uninsured individuals in the Knoxville area. In 1993 Dr. Kim opened the Free Medical Clinic of America at 6209 Chapman Highway, personally funding all its costs and providing virtually all its medical services until 2005. That’s when Dr. Kim’s vision to help those in need was able to take on a new dimension, as community support for the clinic began to grow.

The Free Medical Clinic is an outgrowth of Dr. Kim’s faith. Raised in a strong Christian environment, he was taught as a child to follow the example of Christ and become a light unto the world. His family moved to the United States in 1979, having escaped from North Korea during the Korean War. Dr. Kim says he is continually motivated by a desire to “repay his debt to America for the gift of a new life.”

In 2009, when Dr. Kim launched the golf tournament that bears his name, he had two goals in mind. One was to raise funds for the Free Medical Clinic of America. The other was to spread the word about its mission and service to the community.

Initially, Dr. Kim provided medical care, after regular appointments at his oncology practice, to working men and women who could not afford to pay for treatment or purchase health insurance. The numbers of needy patients increased to the point that in 2005 Dr. Kim closed his oncology practice and began devoting full time to his free clinic patients.The clinic relies primarily on donations from individuals, churches and businesses to fund its operation. Staffing consists of Dr. Kim, an office manager, a part-time nurse and a host of volunteers – doctors, nurses and administrative personnel.

From the small number of patients Dr. Kim treated for free that first year, today The Free Medical Clinic typically accommodates about 100 patients each week. All-told, the clinic has served more than 13,000 new patients. Like the clinic itself, the Dr. Tom Kim Charity Golf Tournament has grown, with revenue and player participation increasing each of the six years it has been staged. The tournament represents the main fund-raising event the clinic holds each year.

This year’s tournament will take place on Wednesday morning, Sept. 23, at Egwani Farms Golf Course in Rockford. It consists of four-player teams and uses a best-ball format. Player check-in is scheduled for 7 to 8 a.m. with a shotgun start at 8:30. For the second straight year, Rusty Wallace Honda is furnishing the grand prize, a 2015 Honda Civic, which will go to a player sinking a hole-in-one on the designated Par 3. Lesser prizes will be awarded to players making a hole-in-one on any other Par 3.

Breakfast, lunch, beverages and snacks are provided. Also, players will receive a quality embroidered golf shirt and a gift bag. Deputies from the Knox County Sheriff’s Department will allow golfers to fire one of their tee shots from a retrofitted AR-15 rifle, which is capable of launching a golf ball more than 300 yards.

Dr. Kim will continue his tradition of playing one hole with each foursome so he can greet each participant and thank them for supporting the tournament and the clinic. Joining him this year will be Bob Bell, host of the Bob Bell Show on WRJZ Joy 620 Radio, a media sponsor. Bell will broadcast his program live from Egwani from 6 to 8 a.m.

Teams and players are encouraged to sign up no later than Aug. 31. Sign-ups will be accepted through Sept. 22; however, late registrants may not receive a golf shirt. To register as a player, sponsor, donor or volunteer, go to the clinic Web site, www.freemedicalclinic.net, and click on Charity Golf Tournament at the top of the home page. Participants can use the PayPal feature to pay fees or make cash donations.