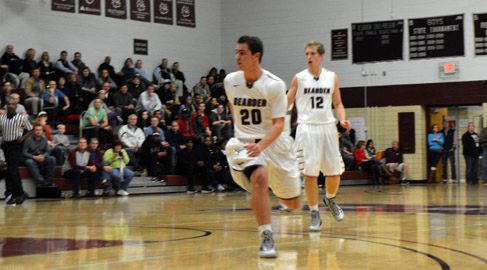 Austin Duncan might be the most soft-spoken basketball player in Knox County but he’s quietly providing some offensive punch for the Bearden Bulldogs lately.

And it couldn’t come at a better time. Entering the season, veteran coach Mark Blevins didn’t know where his offense was going to come from.

Bearden lost a good chunk of last season’s scoring as many of the team’s impact players graduated. Jack Graham, Isaiah Campbell, Noah Gettelfinger and Duncan returned and shined at times and Blevins knew someone had to step up.

Graham and Campbell have emerged as team leaders. Gettelfinger and Jason Smith (who had some big games earlier this season) are hurt and Jake Elkins recently returned from injury.

Enter Duncan, a junior guard/forward, who is finding his place in the Bulldogs’ attack. He may not be the team’s leading scorer but he’s played a complementary role for his team in recent games.

In his last three contests, Duncan has averaged 15.7 points per game. He recently scored 23 points in Bearden’s 86-62 win over South-Doyle in the semifinals of the BSN Sports Super 16.

He followed that up with 14 points in the tournament championship game. Bearden (10-6) lost that game to Siegel 84-68. The Stars entered the game and left Knoxville undefeated.

For his part, Blevins has been pleased with Duncan’s recent performances.

“I tend to put more pressure on players who I think will go on to college and last year, he wasn’t sure if he wanted to play college basketball but I think Austin’s going to be a collegiate player.”

Blevins said he saw just how good Duncan could be last summer when only half of the team went to camp at the University of Mississippi.

“We went to Ole Miss and we were playing a team that was better than us,” Blevins said. “Austin decided that he was going to be Larry Bird that day and we won.

“We wouldn’t have won without him.”

Duncan has struggled with his confidence during his high school career according to Blevins, but he’s gotten comfortable with his scoring role.

He does, however, credit his teammates for his success.

“We just played Bearden basketball,” Duncan said after the Bulldogs routed South-Doyle. “My teammates just got me the ball and the shots were falling.”

The shots kept falling the next night against the Stars — at least for Duncan. He scored 14 points and was Bearden’s sole representative on the all-tournament team. He had 10 points against Unaka in Bearden’s victory in the tournament opener,

Before Christmas, the Bulldogs played in the Shootout by the Sea in North Myrtle Beach and Duncan, while not always the leading scorer, averaged double figures against three of the top teams in the country. He was Bearden’s top scorer in a 99-62 loss to Hillcrest High (SC) with 12 points.

He scored 13 in a victory against Ft. Mill and had 10 in a loss to Carolina High.

“Those were three tough games,” Duncan said. “We had a tough couple of days.”

He may share the spotlight with Graham, Campbell and William Snyder among others but he doesn’t seem to mind.

Graham, one of the Bulldogs’ top scorers, said he was pleased to play with Duncan.

“He’s done a great job for us,” Graham said.