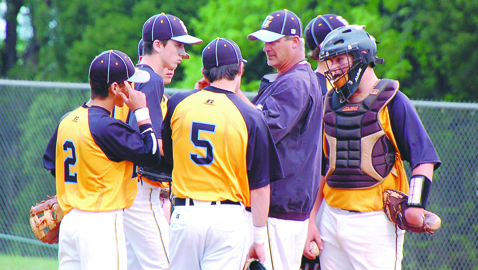 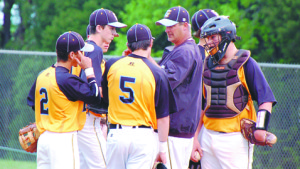 PIGEON FORGE— For the past decade Gibbs and Pigeon Forge have dominated the District 3-AA baseball scene.

This one started a little late thanks to a lengthy rain delay. Once things started, however, there was plenty of excitement as the host Tigers prevailed 4-1 and strengthened their hold on first place.

Gibbs scored its lone run of the contest in the first inning. Eagles second baseman Pierce Elliott started things with a leadoff double. He advanced to third when Trey Carpenter singled. Elliott scored when Matt Pack lifted a sacrifice fly to center.

The Eagles held their advantage until the Tigers (17-5, 9-0) pulled even in the bottom of the third.

Pigeon Forge, which defeated Gibbs 5-1 on Monday, April 16 in Corryton, missed some early chances. The Tigers left the bases loaded in the first and had a rally snuffed out in the second when Scott LaFollette grounded into a double play.

They finally broke through in the third by taking advantage of a pair of Gibbs errors. Adam Hickman led off the frame with a single and scored when Drake Byrd reached on a defensive miscue by the Eagles.

“They’re probably the best Double-A team in the state right now,” Gibbs coach Geff Davis said. “We gave them some extra outs and they made us pay for it.

“Anytime, you jump out to a lead against a team like that, you have to feel good about it. Right now, we’re competing hard and we just need to make a couple of plays here or there. We’ve got the district tournament coming up in a couple of weeks and we’re getting better.”

The Tigers went ahead for good in the fifth when they scored a pair and again, they took advantage of some shaky Gibbs defense.

Byrd drew a leadoff walk in the inning and then moved to third when the Eagles mishandled a sacrifice bunt by Kyle Savage. Byrd scored the go-ahead run on a sacrifice fly by Colt Buchanan. Pigeon Forge got some insurance when Savage scored on a groundout by Josh Miller. Savage scored on a controversial call on a fielder’s  choice by LaFollette.

“That was a bad call,” Davis said of what appeared to be the third out of the inning. “But that’s high school baseball.

“We played well tonight,” Guinn said. “Last [Monday], we won 5-1 but I really wasn’t all that pleased. I felt like we left a lot of runs on the field.

“Tonight, we got some big key hits and every game takes on its own personality.”

Guinn also noted that both wins were hard to grab.

“Gibbs is Gibbs and every game we play against them is tough and I guarantee that we will see them again [in the district tournament].”