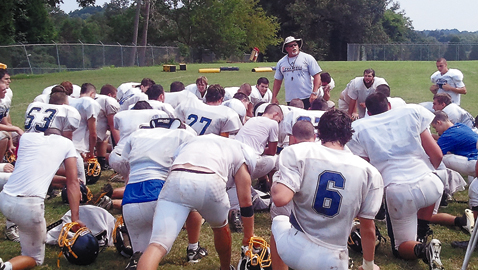 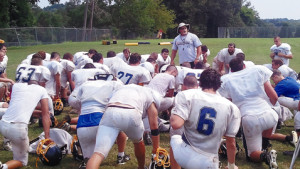 Seymour Head Coach Jim Moore rallies his Eagles at the end of a hard hot practice.

Size has seemed to be a problem for the Seymour Eagles during the last few seasons. Not only are they the smallest school that competes in District 2-AAA student-wise, but the offensive and defensive lines have had to battle fearlessly in the trenches against bigger schools like Sevier Co., Jefferson Co., Morristown East and West, South Doyle, Cherokee, and Cocke County. This year will be no different when it comes to school sizes, but it does show some promising factors when it comes to player size and development. 4th year head coach Jim Moore sat down with The Focus last week with a bigger smile and much more optimism than in years past, knowing and hoping that things will change this year. “It’s nice to have a group of returning young men that are bigger and stronger than they were a year ago. We think we have some kids this year that can make some big things happen for us,” Moore said.

The Eagles will provide one thing for sure this year for the Seymour faithful, that being a proven passing attack behind a promising offensive line. With two outstanding and intelligent quarterbacks in Nick Sexton and Corban Ogle, who both tossed for roughly 800 yards a piece last year, one can only wonder how far this unit can go this year. Moore took his Eagles to camp in Coker Creek last week in order to possibly get a few questions answered. What he found out was that this 2012 squad has more than just potential.

“Our offensive line was a big question mark for us early. We got down there and found a group of kids who got better quick. It’s a young group, but their attitude grew and they got better as a unit. That’s what we needed to happen. Then we came back home and scrimmaged Heritage, Pigeon Forge, West Greene, and Unicoi County. That’s where we saw a big difference in the defensive line as well by not giving up any scores. We made some mistakes and gave up some big plays, but were happy overall in the way they came together.” Moore said.

Moore has also been working tirelessly on another unit that plagued the Eagles last year. Special Teams. “We have worked so hard on that this summer. We actually spent an hour and a half in one session on just it alone. It’s sometimes tough to get these young men to realize the importance of that part of the game,” Moore continued. “Sometimes we’ll have some players who see work on both sides of the ball and want to rest and take some time off on ‘special teams’. When you do that, then you are right back out there on offense or defense after lighting up the score board for someone else. We can’t have that happen this year.”

The strongest side of the team this year according to Moore is the receiving corps. Seniors D.J. Griffin, Corey Heard, and Chris Grimo will be the favorite targets for Sexton, the likely starter at the quarterback position. “We feel comfortable with those guys. We are lucky to have them all back and healthy this year. I like the potential this group has. When they understand the heart and effort it takes to make this thing go, They can be a very important part of this team. Moore said.

Tanner Sise will more than likely be the featured back to carry the ball for the Eagles this season. He will have the added services of Kevin Taylor, Trevor Wallace, and Jared Newberry in the backfield to compliment the running game.

If these Eagles will believe in themselves, and continue to hold on to a ‘no-quit’ attitude, things in Seymour will go nowhere but up.

“I think we have a group of young men that has all the potential to be a successful football team this year,” Moore concluded. Seymour kicks off the season on August 17th at Campbell County.