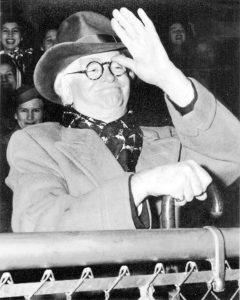 E.H. Crump at Football Game-1949. From the author’s personal collection.

Following his ouster as Mayor of Memphis, E. H. Crump ran for and was elected Shelby County Trustee.  His removal from the mayor’s office was a humiliation Crump never forgot and he certainly never forgave anyone he considered to have played a part in his removal.  Crump attributed his removal from office as having been engineered by greedy private power companies who naturally feared his support for publicly-owner power.

Crump was able to settle one political score in the 1916 election.  Republican Governor Ben W. Hooper had been an important factor in Crump’s removal and had lost his reelection campaign in 1914.  Crump had strongly supported Hooper’s Democratic opponent, but Hooper was seeking a political comeback in 1916, seeking election as Tennessee’s first popularly elected United States senator.  Hooper’s opponent in the general election was Congressman Kenneth D. McKellar.

McKellar had been a close friend and ally of the Memphis Boss for some years and had unexpectedly won the senatorial nomination by defeating two powerful opponents in the primary, incumbent Senator Luke Lea and former Governor Malcolm Patterson.  Hooper was likely the strongest candidate the Republicans could field, but McKellar won the election decisively, a victory that would effectively end Hooper’s political career.

Crump, with the large income he earned as Shelby County Trustee, turned his organizational genius to private business, forming an insurance company with partner Stanley Trezevant.  Crump’s insurance company eventually became the largest underwriter in the South.  Crump would later add to his holdings ownership of a Coca-Cola bottling plant in upstate New York.  In time, Crump would become a millionaire.

As the decade of the 1920s began, E. H. Crump was taking a greater interest in Tennessee politics.  1920 was not a happy year for Tennessee Democrats or Democrats much of anywhere for that matter.  President Woodrow Wilson, incapacitated by a serious stroke, wanted a third term despite having become feeble and querulous.  National Democrats wisely looked elsewhere for a candidate, settling on Ohio Governor James Cox.  Governor Cox selected a promising young politician from New York, Franklin Delano Roosevelt, as his running mate.  The Republicans also nominated an Ohioan, Senator Warren G. Harding, and the GOP won a smashing victory at the polls in the first presidential contest where women could cast ballots.

Tennessee Democrats were horrified when Harding not only won the presidency, but also managed to carry Tennessee.  Democrats were even more horrified, if possible, by the election of a Republican governor.  Democrat A. H. Roberts had first been elected in 1918, running on a platform that promised not to give women the right to vote.  That stance put Roberts at variance with Senator K. D. McKellar and E. H. Crump, both of whom strongly supported suffrage for women.  The Tennessee legislature became the last state necessary to ratify the Nineteenth Amendment to the Constitution and Governor Roberts rightly feared many women would retaliate against him at the polls.

Alfred A. Taylor, then seventy-two years old and a seasoned campaigner, was the Republican nominee for governor and displayed a shrewd sense of showmanship while crisscrossing Tennessee, accompanied by a hillbilly band and his hunting dog, “Ol’ Limber.”  Taylor entertained crowds with his a seemingly endless supply of folksy stories and humor while the hapless Governor Roberts tried his best to avoid the wrath of angry female voters and beg for a second term.

Naturally, Tennessee Democrats were intent upon reclaiming the governorship from Alf Taylor in 1922.  The old warhorse of Tennessee’s Democratic Party, former Governor Benton McMillin, wanted another chance to serve and his opponent in the primary was an attorney and tobacco farmer from Clarksville, Tennessee, Austin Peay.  McMillin had been governor from 1899 – 1903 and had been a frequent aspirant for the United States Senate, but never quite managed to get elected.  McMillin had been President Woodrow Wilson’s Ambassador to Peru and Minister to Guatemala and Wilson remained highly popular in Tennessee.  Despite being seventy-seven years old at the time, McMillin campaigned hard for the Democratic nomination.

At forty-six, Austin Peay was a generation younger than Governor McMillin.  Although E. H. Crump had yet to fully consolidate his power in Shelby County, Crump supported Peay for the nomination and was gratified when Austin Peay received a handsome majority in his domain.  Peay’s convincing victory in Shelby County more than accounted for his margin of victory statewide.  Peay barely managed to edge out the elderly former governor Benton McMillin in the primary, winning by just over four thousand votes, while his majority in Shelby County alone was in excess of seventy-five hundred votes.

E. H. Crump and the Shelby County machine supported Governor Peay for a second term, although Peay faced only token opposition in the person of perennial candidate Dr. John R. Neal.  By 1926, Crump was viewing Governor Peay in a somewhat different light.  The Memphis Boss had ruefully come to the conclusion the Peay administration was favoring rural counties at the expense of Tennessee’s more urban areas.  Peay was collecting tax revenue from the urban counties and using the money to improve conditions in the poorer, less populated rural counties, something that did not sit well with Mr. Crump and his Shelby County base.  Crump was also becoming uneasy with the possibility the popular governor might be eyeing K. D. McKellar’s Senate seat, a suspicion shared by Senator McKellar.  While Peay denied having senatorial ambitions, neither McKellar nor Crump was convinced.

Crump was also increasingly unhappy with Governor Peay’s choice of friends.  Luke Lea, former United States senator from Tennessee, had acquired enormous influence from his ownership of the Nashville Tennessean newspaper.  Lea had enthusiastically supported Austin Peay’s political ambitions and was one of the governor’s closest advisors, a fact little appreciated by E. H. Crump.

Despite Peay’s friendship with Luke Lea and Lea’s obvious political clout, the independent-minded governor did not hesitate to refuse requests from Colonel Lea.  Lea saw nothing whatever wrong with using the expansion of Tennessee’s highway system for political purposes, something the governor absolutely refused to do.

Crump joined with the leader of another thriving political machine, that of Nashville Mayor Hillary Howse.  The two urban bosses decided to support the gubernatorial candidacy of State Treasurer Hill McAlister who was challenging Peay as the governor sought to win a third consecutive two-year term.

Governor Peay was renominated in the Democratic primary, albeit only narrowly.  McAlister ran very well in the urban areas, while Peay remained very popular with his rural base and the governor did especially well in traditionally Republican East Tennessee.  Much of Peay’s popularity in East Tennessee was due to his strong support for the Great Smoky Mountains National Park.

Peay, only fifty-one years old at the time, died suddenly on October 2, 1927 from a cerebral hemorrhage.  Peay’s influence with the state legislature had seriously receded and his battles with legislators and problems with his health may well have contributed to his untimely death.

Speaker of the State Senate Henry Horton succeeded Austin Peay as Governor of Tennessee.  Horton was serving his first term in the Tennessee Senate and was distressingly inexperienced, both as an administrator and as a politician.  E. H. Crump watched with increasing alarm as his rival and hated nemesis Luke Lea moved quickly to fill the power vacuum left by Austin Peay’s death.  Governor Horton was grateful for Lea’s support and followed the Colonel’s advice so closely many critics believed Luke Lea to be governor in all but name.

It soon became readily apparent Horton would seek election as governor in his own right in 1928.  Horton would have the strong support of Luke Lea, who soon concluded he needed to divert the attention of E. H. Crump by encouraging the candidacy of West Tennessee Congressman Finis Garrett who was running for the Senate against incumbent K. D. McKellar.  Garrett was the Minority Leader of the U. S. House of Representatives and had been in Congress twenty-four years before challenging McKellar for the Democratic nomination for the United States Senate.

Lea realized launching a Garrett candidacy against McKellar would not only divert the attention of Crump and his Shelby County machine, it would also mean the urban bosses would have to divide their resources between contests for the governorship and McKellar’s Senate seat.  Lea had also acquired daily newspapers in Knoxville and Crump’s own Memphis, giving Lea tremendous influence at a time when radio was not widely in use and Tennesseans got their news from newspapers.

Once again Crump supported Hill McAlister and the gubernatorial campaign was brutal, with both sides using every means to win.  The entry of a third candidate concerned Governor Horton’s supporters, as Lewis Pope had been a highly respected member of the late Austin Peay’s administration.  Horton was profoundly embarrassed when Peay’s widow publicly endorsed Lewis Pope’s candidacy while the governor was in Clarksville to make a speech.

The election results were mixed; Horton scraped by McAlister to win the gubernatorial nomination, but Senator McKellar crushed Finis Garrett to win a third term in the U. S. Senate.

Practical as always, E. H. Crump knew Henry Horton was going to be Governor of Tennessee for at least two years, which meant Luke Lea would continue to be the power behind the throne.  Crump soon concluded an uneasy alliance with both Lea and the Horton administration, knowing all too well the power of the state government to cause trouble inside his own fiefdom.

Henry Horton was again elected governor in 1930, but mere days after the election came news that would transform Tennessee politics, topple the Horton administration and send Luke Lea to a North Carolina penitentiary.