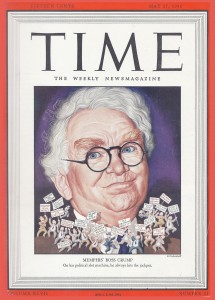 E. H. Crump on the cover of TIME, circa May 1946. From the author’s personal collection.

Governor Gordon Browning had unleashed a fierce assault on the Memphis political machine, as well as its leader, E. H. Crump.  Browning proposed to institute a county unit bill to render the huge voting majorities produced in Shelby County meaningless in statewide elections.

Boss Crump sent an urgent appeal for help to Senator Kenneth McKellar.  McKellar had not supported Browning for the governorship and had repeatedly warned Crump he would be sorry for backing Gordon Browning.  Since Browning’s election, Senator McKellar used every opportunity to fan the flames of Crump’s discomfiture with the new governor.  McKellar was highly respected and personally popular with most members of the Tennessee legislature and the senator responded to Crump’s plea for help by taking the train from Washington, D. C. to Nashville where he spoke before the General Assembly.  McKellar roundly damned the county unit plan and Gordon Browning in typically blunt McKellar fashion.

Browning, realizing he was fighting for his political life, used every means available to him to pass his legislation.  Appointments, jobs, patronage and other favors were used as inducements to hold wavering legislators in line as well as pick up the votes of those who remain uncommitted.  More than a few legislators were reluctant to cross the powerful McKellar who dispensed the Federal jobs and positions available through the New Deal administration of President Franklin D. Roosevelt.

Governor Browning was finally successful in having the Tennessee General Assembly pass his county unit bill, only to see it struck down by the state Supreme Court.  Browning also managed to further imperil his own political standing with his appointment of George L. Berry to the Senate seat held by Nathan Bachman, who had died suddenly of a heart attack on April 23, 1937.  Browning appointed George L. Berry, long-time President of the International Pressmen’s Union, on May 7, 1937.  It was a curious appointment, as Tennesseans had never been overly friendly to labor leaders.  Berry himself had been an occasional candidate for high public office, but had never been elected to anything outside his own union.

Governor Browning had been summoned to the White House by President Franklin Roosevelt to discuss the Senate appointment.  Roosevelt told reporters he did not intend to tell the governor whom to appoint, but rather whom not to appoint.  Rumors circulated that Secretary of State Cordell Hull, a former senator from Tennessee, was dissatisfied serving in FDR’s Cabinet and wanted to return to the Senate.  Roosevelt did not want to lose Hull, as the Tennessean commanded enormous respect from the Congress in particular.  FDR had another reason for being interested in who the new senator from Tennessee would be; the Senate was debating Roosevelt’s attempt to enlarge the U. S. Supreme Court.  Angry because several important New Deal bills had been invalidated by the high court, Roosevelt wanted the right to appoint an additional justice for every justice on the court over age seventy-two; that would have given FDR the right to name at least six justices at the time.

After Governor Browning appointed George L. Berry to the United States Senate, Berry departed for Washington with his new Secretary, F. L. Browning, the governor’s older brother and his chief political advisor.  Berry’s employment of the governor’s brother further cemented in the public mind the ties between Gordon Browning and his appointee, which would have political consequences for the both of them.

Senator Berry immediately encountered hostility from his senior colleague, K. D. McKellar.  Berry further antagonized McKellar by proposing a division of the patronage in Tennessee, a proposal McKellar refused.  Senator Berry had also been expected to support President Roosevelt’s court-packing bill, but despite being inside the Senate Chamber during the vote, he did not answer the roll call, a fact Senator McKellar quickly pointed out to a very peeved FDR.  Berry’s failure to support the administration more firmly cemented McKellar’s authority over Federal patronage in Tennessee.

The wily McKellar outmaneuvered George L. Berry at every turn and Berry increased Governor Browning’s political woes by engaging in a very public dispute with the Tennessee Valley Authority.  Berry owned considerable real estate holdings in Tennessee, as well as significant mineral rights for even more property.  Berry claimed that he owned marble deposits in land flooded by the TVA worth millions, a claim TVA not only disputed, but also flatly rejected as untrue.  Boss Crump, understanding most Tennesseans revered the TVA, exultantly started referring to Berry as “the marble wizard”.

Congressman Walter Chandler was the first opponent to declare against Governor Browning, but Crump was uncomfortable about a candidate from inside his own domain.  Senator McKellar was cool to the notion of a Chandler candidacy and the Memphis Congressman soon withdrew.  McKellar looked much more favorably upon Prentice Cooper, a young and largely unknown State Senator from Shelbyville.  Crump did not know Cooper and went along with McKellar’s choice in the gubernatorial race.

The McKellar – Crump organization entered a candidate in the 1938 special election for the United States Senate as well.  Incumbent George L. Berry evidently liked being in the Senate and intended to run again.  The senatorial nod went to yet another McKellar ally, Tom Stewart, who was the District Attorney for a Middle Tennessee district centered around his home city of Winchester.  A third candidate entered the senatorial sweepstakes when Fourth District Congress J. Ridley Mitchell announced his own candidacy.  Mitchell had been a Judge of the Circuit Court and had first been elected to Congress in 1930.  He had been reelected in 1932 by defeating a fellow Congressman, Ewin L. Davis, who had served in Congress for fourteen years.  Mitchell had demonstrated impressive political skills and was highly popular inside his own district, although he was little known outside the confines of the Fourth District.

Congressman Mitchell had been warned by several family members a race for the Senate was not only highly risky, but quite likely would end his own political career.  Mitchell apparently believed the fight between McKellar and Crump on one side and Governor Browning on the other, would allow a third candidate to win the Democratic nomination.

The 1938 campaign in Tennessee was so bitter and hard fought, it became something of a scandal and prompted an investigation by the United States Senate.  Gordon Browning tried to ignore his own appointee to the United States Senate, George L. Berry, as Berry had become a clear liability in the election.  Browning tried to make Crump and the Memphis machine the chief issue in the campaign, denouncing bossism all across the state, but his own heavy-handed tactics had cost him dearly and even the Nashville Tennessean, Browning’s most faithful press ally, deserted him in his reelection campaign.

Both Crump and Senator McKellar were deeply and personally involved in the campaign from day to day and were overjoyed when Governor Browning and Senator Berry lost badly.  For the next decade, the McKellar – Crump alliance would completely dominate Tennessee politics.

E. H. Crump had thoughtfully gone to the trouble to draw up a proposed political platform for gubernatorial candidate Prentice Cooper.  The Memphis Boss was not a little chagrined when Cooper politely acknowledged the platform, but ignored it.  Cooper would be Tennessee’s governor for six years and remained much closer to Senator McKellar than Crump.  As time passed, Crump was little impressed with Governor Cooper and felt much the same about Senator Tom Stewart, who was also much closer to McKellar than the Memphis Boss.

While national publications would frequently refer to both Governor Cooper and Senator Stewart as faithful servants of Boss Crump, the truth is Crump had not selected either man to run for office.  The Memphis Boss had acquiesced in Senator McKellar’s choices, perhaps in penance for Crump having embarrassed his old friend in the 1936 election and his choice of the hated Gordon Browning.

E. H. Crump had succeeded Senator McKellar as Tennessee’s Democratic National Committeeman and the Roosevelt administration paid court to the Memphis Boss.  Crump, while one of FDR’s original supporters at the 1932 Democratic National Convention in 1932,  did not trust nor especially like Franklin Roosevelt.  Yet, Crump was a practical politician with a keen understanding of his fellow human beings.  The Memphis Boss and Senator McKellar both quickly endorsed FDR for a third term well before it was clear Roosevelt would accept an unprecedented third term in the White House.

McKellar was himself a candidate for reelection in 1940, as was Governor Prentice Cooper.  The opposition to the McKellar – Crump alliance was so disheartened and depressed following the staggering defeat of Gordon Browning in 1938 that neither McKellar nor Cooper faced any significant challenger in the primaries and the Republicans posed no serious threat in the general election.  Once again, the McKellar – Crump ticket won the election easily.

In 1939 Crump would be a candidate for elective office for the last time.  Crump ran for Mayor of Memphis with the explanation he was an “elector” for Congressman Walter Chandler who remained in the nation’s Capitol.  Crump was elected without opposition and took the oath of office just as he was about to depart for New Orleans.  A crowd had gathered in a blizzard to watch Crump be sworn-in as he waited on the platform of his train.  Crump promptly resigned, leaving the Vice Mayor to become Acting Mayor until the City Commission appointed Walter Chandler.  Crump went on to Louisiana and the Sugar Bowl.  Crump’s election and the subsequent resignation gave Memphis four mayors in a twenty-four hour period.

The decade of the 1940s would see both E. H. Crump and Senator Kenneth McKellar at their political peak.  The Memphis Boss, while a poor public speaker, enjoyed the attention he received from the press, although he was notoriously thin-skinned about criticism.  Crump was flamboyant in both his demeanor and his dress.  The Memphis Boss could be observed at the numerous public functions he attended with a large hat, a walking stick firmly grasped in one hand, wearing custom-tailored clothes that were frequently a bit loud.  His head crowned by a head of fluffy white hair like a halo surrounding his head, E. H. Crump was impossible to miss.