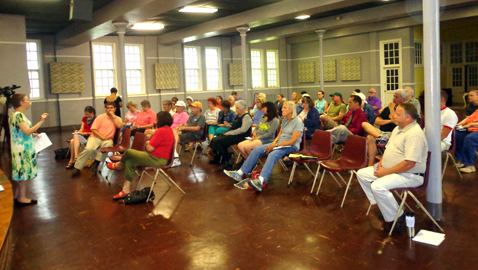 Photo by Mike Steely
Members of various neighborhoods listen to Commissioner Amy Broyles’ update on the attempt to preserve the Howard Home on North Broadway.

They were there from Old North Knoxville, 4th and Gill, Oakwood-Lincoln Park, Edgewood, Fountain City, Park Ridge, Belle Morris, Whittle Springs and the Alice Bell neighborhood. Other residents attended as well, from the neighborhoods like South Knoxville and Chilhowee Hills.

All of them, some 30 or so people, were at the United Methodist Church on 3rd Avenue Sunday, May 17 to get an update on the ongoing attempt to save the Howard House from the demolition ball. Commissioner Amy Broyles and Knox Heritage Director Kim Trent were present and updated the concerned citizens on the status of the Broadway home. Broyles said that an online petition has more than 7,500 signatures and the Knox Heritage “Go Fund Me” online campaign has raised about $8,000. Trent said that while $100,000 has been pledged by an anonymous donor, much more is needed. She pointed out that “checks are being received.”

Commissioner Jeff Ownby and City Councilman Mark Campen joined the meeting and listened as the update was given.

Broyles referred to the Howard House being added to the Knox Heritage’s Fragile 15 List and she said that so far no application for a rezoning change had been made to the Metropolitan Planning Commission. The request could be filed and heard in the planning commission’s July meeting and it will take several steps, including MPC approval and two city council votes, before a rezoning could take place.

Broyles also mentioned the city council’s initial passing of a 60-day waiting period after an application for any demolition.

When asked by The Knoxville Focus about the delay, Trent confirmed that the resolution has no real enforcement powers if a property owner doesn’t want to consider options to save a historic property. A second reading of the ordinance would take place at the next council meeting and, if passed, would simply offer a “cooling off” period where Knox Heritage or other groups can attempt to find an alternative to demolition.

Demolition of a structure without a permit in Knoxville carries only a $50 fine.

Trent said she has met with the developers, Polestar, LLC, and said the company is “savvy, well-funded, and they know what they are doing.” Purchase of the Howard House and the Centerpointe Church properties are contingent on approval of rezoning. She said the developer may be open to locating the project in another location but added that Centerpointe Church congregation has already vacated the church building, which is next door to the Howard House, and are holding their church services at another location. She confirmed that the Centerpointe Church building and lot are not large enough to contain the proposed Walmart store without including the Howard property.

The meeting also saw a discussion about the increasing number of check-cashing businesses in Knoxville and Trent said such a business is being built on a recently demolished site near the Howard Home. Councilman Mark Campen said that a city ordinance might be adopted to limit the number of check-cashing businesses to a quarter to one  half mile from a similar business and said that Councilman Nick Pavlis is pushing such an idea.

Broyles referred to the turnout at a public demonstration April 18th at the historic home and called for another rally there. She also called on those present to contact the city council and the planning commission to make their opposition known.

Attendees were also asked to contact Polestar, LLC, and Walmart.