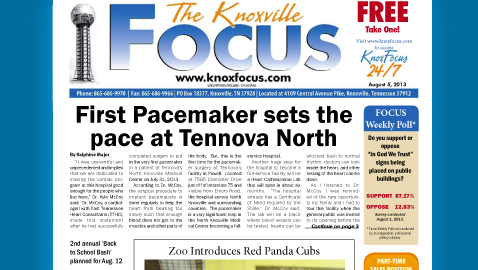 By Ralphine Major
“It was uneventful and unprecedented and implies that we are dedicated to making the cardiac program at this hospital good enough for the people who live here,” Dr. Kyle McCoy said. Dr. McCoy, a cardiologist with East Tennessee Heart Consultants (ETHC), made this statement after he had successfully completed surgery to put in the very first pacemaker in a patient at Tennova’s North Knoxville Medical Center on July 31, 2013.
According to Dr. McCoy, the surgical procedure to implant pacemakers is done regularly to help the heart from beating too slowly such that enough blood does not get to the muscles and other parts of the body. But, this is the first time for the pacemaker surgery at Tennova’s facility in Powell. Located at 7565 Dannaher Drive just off of Interstate 75 and visible from Emory Road, the hospital serves North Knoxville and surrounding counties. The pacemaker is a very significant step in the North Knoxville Medical Center becoming a full-service hospital.
Another huge step for the hospital to become a full-service facility will be a Heart Catherization Lab that will open in about six months. “The hospital already has a Certificate of Need required by the State,” Dr. McCoy said. The lab will be a place where blood vessels can be tested, hearts can be shocked back to normal rhythm, doctors can look inside the heart, and other testing of the heart can be done.
As I listened to Dr. McCoy, I was reminded of the rare opportunity my family and I had to tour this facility when the general public was invited to its opening before the hospital started accepting patients. We stood in the never-before-used operating room and heard that heart patients would be transported to the downtown hospital because the North Knoxville Medical Center was not equipped at that time to handle cardiac problems. I looked at the corked-back tile memento given to us that day. It was August 2007. Six years later, the hospital is making history in providing heart care for patients.
East Tennessee is fortunate to have this beautiful state-of-the-art facility as a vibrant part of the community, as well as the team of doctors at ETHC helping to make it a full-service hospital. With the experience, skill, and knowledge of heart specialists like Dr. McCoy (featured in The Focus February 7, 2011, “The Real McCoy”), North Knoxville Medical Center is becoming a full-service facility which will greatly benefit the community. A significant step has been taken—the first pacemaker has already been implanted in a patient.