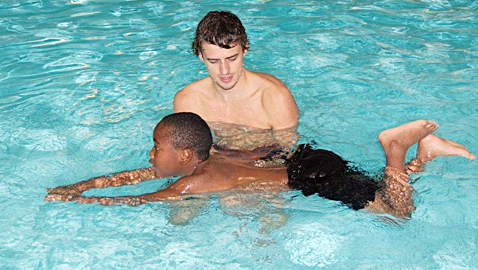 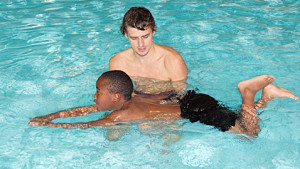 A vibrant swim program begun six years ago by Emerald Youth Foundation, 1718 North Central Street, is helping to beat some terrible national odds for inner city Knoxville youth and to create athletes too.

Emerald Youth is beginning its third year of swim lessons in the fall and spring for all of the about 200 elementary school children in its after school program. Additionally, the Emerald Youth swim team completed a sixth successful season this summer with 50 members.

The swim program helps counter locally a horrible set of U.S. statistics. According to a USA Swimming Foundation study, about 70 percent of African-American children and 60 percent of Hispanic children are non-swimmers, and thus have a much higher rate of drowning than other children. The U.S. Centers for Disease Control and Prevention have found that African-American children between the ages of 5 and 14 are almost three times more likely to drown than white children.

The success of African-American freestyle swimmer Cullen Jones, who won two silver medals in the London Olympics, shone light on the situation.

Jones, who nearly drowned at age 5 because he didn’t know how to swim, is an outspoken advocate of widespread swim lessons for African-American and Hispanic children in particular.

Emerald Youth Foundation, which serves more than 1200 inner city children of all races each year, aims to achieve swim proficiency for as many children as possible, said longtime swim coordinator Kent Stanger. He said that as some children become swimmers, their friends are drawn to want lessons as well.

Stanger said inability to swim is a common inner city problem. “Parents often don’t know how to swim, and they are not comfortable going to the pool and working with the children in the water. To learn to swim, you need a lot of time, exposure and frequency in the water.”

Beginning in September, each week about 100 children in JustLead, Emerald Youth’s after school program, ride buses to two city pools for swim lessons. By Christmas, about 200 children in first through fifth grade will have participated in Learn to Swim, the 8-week long series of swim lessons. The cycle will begin again in the spring.

For students, swim lessons are just a routine part of the day. Students take American Red Cross curriculum lessons from Knoxville City Aquatics staff at the Elmer Brine Pool at the South Knoxville Community Center, and at Adaptive Center Pool on Dandridge Avenue.

Stanger said the combination of lessons and Emerald Youth’s swim team has dramatically improved children’s swim skills. Nearly all participating children gain basic proficiency as swimmers, and some excel. For example, Stanger said that one boy who came to summer swim practice unable to swim several years ago is now one of the team’s strongest male swimmers. A girl who practiced all last winter wants to swim competitively in college.

At Emerald Youth, swimming has become a joyous form of outreach. The Rev. Doug Banister, who coaches the Emerald Youth swim team at the Ed Cothren Swimming Pool, 1737 Reynolds St, said the swimmers are coming into their own as athletes. This year, the team sent 31 swimmers to the Greater Knoxville Area Interclub Swimming Association City Championship at the University of Tennessee Aquatic Center on July 28.

Banister, whose own children swam competitively and now help coach this team, said he enjoys watching children excel at swimming  “All the kids improved. Many have a lot of athletic ability,” said Banister, who is pastor of All Souls Church downtown. “This summer, we increased the number of workouts and became a viable team. My dream is that some will go on to college swimming.”

Emerald Youth Foundation, 1718 North Central Street, is a faith-based network which ministers to more than 1200 urban youth each year through academic assistance, mentoring, and sports. Steve Diggs is executive director.