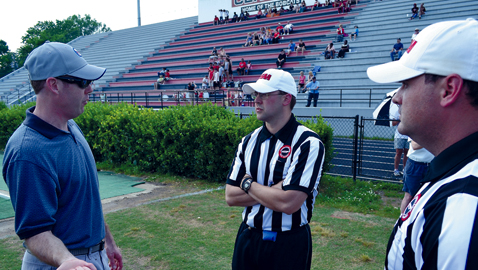 Lee Hedrick (left) instructs officials at the East Tennessee clinic in May at Central High
School. Hedrick will be a new full-time official in the Southeastern Conference this fall.
Hedrick will be a Center Judge, a new position in SEC crews this season.

John Wright sees the game of football from the standpoint there are three teams on the field – the two teams that consist of players and a third team that officiates the contest.

It is the latter team that Wright and fellow Southeastern Conference official Johnny Hibbett, who are both from Knoxville, had in mind when they started “the thought process” of having an East Tennessee Football Officials Clinic in Knoxville a few years ago.

“Both of us have a lot of friends who are officials in the SEC,” said Wright, “so last year we said we’re going to do it and see what happens.”

The 2014 clinic was attended by 32 officials, said Wright. This year’s clinic, held May 9 at Central High School, had 45 officials. “Our goal is to increase it year by year.”

Tom Ritter, one of the top referees in the SEC, was added to this year’s clinic staff, which also included Atlantic Coast Conference referee Jeff Flanagan, SEC umpire Russ Pulley and Terry Brown, a National Football League Field Judge who also is a supervisor in the Knoxville Football Officials Association, which is made up of approximately 100 local high school officials.

“We just want to give back,” said Wright. “These clinics go on throughout the country. We have probably a dozen college officials from right here in East Tennessee, but we didn’t have a clinic here. The goal of it is just to give back to local officials from surrounding areas to help them get better.

“On a Friday night, I always say there are three teams on the field,” added Wright. “The players make up two teams. Officials make up the other. We want to make that team the best team.”

A session on “Difficult Plays to Officiate” was presented by ACC referee Stuart Mullins.

After breaking into groups, officials worked on their specific position for almost two hours.

After lunch, there was a video presentation and an open forum for questions and answers.

The clinic concluded with officials working on the field at Central High’s Red and Black spring game.

Howard Russell, KFOA supervisor, was an observer at the clinic.

“I wish they all were here,” said Russell, referring to KFOA members. “Officiating is a learning process. A clinic like this would help the older officials as well as the younger ones.

“If you want to move up to the varsity level in high school or move up from varsity to college ball, the more clinics you can involve yourself with, the more that can be gained in the learning process.”

Russell said the East Tennessee clinic should especially be attractive to KFOA officials since it’s held in Knoxville.

Ritter, who came in from Nashville for the clinic, will be going into his 15th season in the SEC. He said he gets a “couple of things” from working clinics.

“I pick up some things from people who come to the clinic – both the other clinicians and some of the attendees – and it’s also a way of giving back.”

Ritter officiated high school football in Texas and about 12 years in Nashville.

“We’ve all stood in their shoes and tried to come up through the ranks and improve,” said Ritter. “We remember those days very clearly. We want to help these guys as much as we can.”

“I’m thankful that we have veteran officials like Johnny Hibbett and John Wright to be able to come out here and do this for us,” said Wallace. “It gives us the opportunity to learn new techniques and mechanics as well as advance and share some experiences with other officials. We appreciate that.”

Romero added, “Hearing some of the experiences they (the clinicians) have had and some of the regrets, it really goes to show that we all go through the same learning process and a lot of the same experiences.”

One lesson Wallace took from the clinic was the emphasis put on using officiating fundamentals, “even for pee wee ball to NFL. The fundamentals of officiating should never go away.”

Proceeds from the clinic, after expenses for lunch and T-shirts, go to the KFOA Scholarship Fund. A $500 donation was made after the 2014 clinic, said Wright.