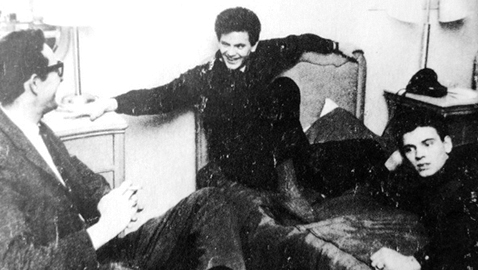 The Everly Brothers with Buddy Holly, with whom they toured for two years. (Photo courtesy of Dennis Owen)

Something special may be coming to honor the Everly Brothers and their time here in Knoxville. Details are being worked out, and glitches are being addressed, but that’s for another story.

As a child growing up in Kentucky, I always assumed that the Everly Brothers were only from that state. I remember hearing them sing “Bowling Green” as a teen and equated them with hailing from that western Kentucky town.  I never realized they moved around a lot and even lived in Knoxville.

Don Everly was born in a little town called Brownie in Muhlenberg County, Kentucky, with brother Phil being born two years later in Chicago, Illinois.The boys moved with their father, a guitar player and radio host, and mother to Shenandoah, Iowa, where they attended school in Waterloo. They sang on their father’s show and the family entertained and sang around the area.

In 1953, the Everlys moved to Knoxville for two years and both boys attended West High School where Don graduated.

While in Knoxville the two high school brothers performed on the Cas Walker Show on TV until they added some early rock and roll to their country music set list. At that point, Cas Walker fired them.

The Knoxville teens caught the ear of a family friend, Chet Atkins, who steered them to Columbia Records. However, their careers did not take off until they signed with Cadence and recorded their hit “Bye Bye Love” in 1957.

The Everly Brothers were certainly pioneers in rock and folk music and inspired artists like the Beatles, Simon and Garfunkel, Buddy Holly and many others. In fact, the Everlys toured with Buddy Holly for two years.

Phil Everly died in January this year at the age of 74. The contributions of Phil and Don were recognized in October when they were honored at the Rock and Roll Hall of Fame’s 19th annual Music Masters ceremonies.

Dozens of popular music stars of various genres appeared and performed Everly songs at this event. Included was Keith Richards of the Rolling Stones, who toured with the brothers in the Stones’ early days, and he said that he had learned a lot from the Everlys. Even Paul McCartney paid homage to them by including the words “Phil and Don” in the Wings’ song “Let em in.”

The final song in the tribute was the Everly classic, “Bye Bye Love,” performed by Graham Nash, who was joined onstage by Don Everly.

Dennis Owen, president of the Kingston Pike-Sequoyah Association, is a graduate of West High School and an avid Everly Brothers fan. Owen called Don Everly earlier this year prior, to the Rock and Roll Hall of Fame Tribute, and spoke to the rock legend for several minutes.

“Don said when he and Phil entered WHS they were pleasantly surprised by the many opportunities to participate in school activities. He mentioned Spanish Club and said that Phil played basketball,” Owen told The Focus. He added that Don mentioned the “hairnet” story about Phil being told to cut his hair in order to play on the team, and Phil showed up at the game wearing a hairnet instead.

When the brothers were fired by Cas Walker, Don said they went downtown and watched a movie. They were seen by the principal on Scenic Drive as they walked home. The boys told him they had been fired, and the principal said, “Then I will see you in school tomorrow.”

“He said he was considering college but when Kitty Wells bought his song “Thou Shalt Not Steal” (which Don wrote at WHS) and recorded it, the check came in the mail and he was now a songwriter,” Owen recounted.

“He confirmed the old Knoxville urban legend: seeing the check and knowing that Nashville would be the next step,” Owen said.

“That check bought us four tires and we were heading to Nashville,” Everly told Owen.

Owen said Don asked about his alma mater and was pleased to hear of the International Baccalaureate Program and the diversity of the students at West.

Everly told Owen that when he told the West High School principal he and Phil were going to Nashville after graduation the principal responded, “Good, because, otherwise, you were going to have to go to summer school to graduate.”

Don said that hearing Bo Diddley’s record in a record store on Cumberland Avenue for the first time was “pure exhilaration.” He said he had wanted to be like Hank Williams before hearing the record. The icon of rock and roll said he didn’t think, at that time, he could ever take part in “that kind of music.”

Owen said, “I told him it sort of seemed like everything worked out OK for him.”