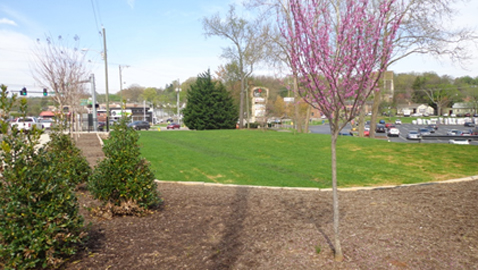 The pocket park that is being leased to the city has been turfed recently and plans are being made to design the Kingston Pike lot to honor the Everly Brothers, who attended West High School. (Photo by Mike Steely)

On the City Council’s agenda for their Tuesday meeting is an item authorizing  Mayor Madeline Rogero to enter into a license agreement with the state that would grant the city the use of TDOT property at Forest Park and Kingston Pike.

The little pocket park, on the corner, was once the site of a gas station and already has been graveled and trees planted. The Bearden Council has also been working on a plan for a kick-off campaign to raise funds for the park and has been working to fill the park with benches, an entry way, and maybe even a statue of the Everly Brothers.

Don and Phil Everly attended West High School in the 1950s and Don graduated there. The high school boys performed on the Cas Walker Television Show and discovered Rock and Roll, which cost them their slot on the supermarket owner’s show but led to a lifetime of hits, recognition, and fame.

“Our group (Bearden Council) has agreed to not have any plans that have been put forth thus far published prior to the final concept plan,” Bearden Council President Terry Faulkner told The Focus.

“The Bearden Council members are grateful to everyone in the city administration and to TDOT official who helped make this happen. Now that the leasing process is near completion our members, with the support of Council Representative Duane Grieve and city officials will begin the process of working towards producing a park to honor and commemorate the outstanding contributions of the Everly Brothers to American Music,” Faulkner said.

So the group is holding off on any public announcement or release of their plans and hopes for the park at this point until all the administrative, safety and legal details are finalized.

City Councilman Duane Grieve, an architect, has been active in the push for the creation of the park. The agenda item carries the name of “Bearden Gateway Park” and notes that the park would be “in honor of the Everly Brothers.”

Recently the gravel lot there has been replaced with grass turf. Evergreen and other trees were planted several months ago.