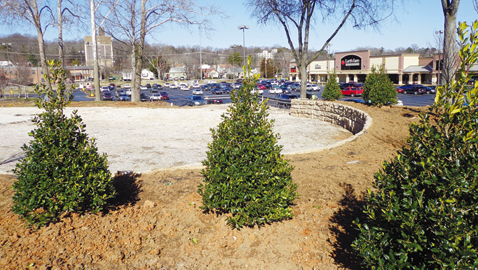 Photo by Mike Steely.
The proposed Everly Brothers Park on Kingston Pike in Bearden was recently planted with trees. Apparently all that remains is the park to become officially transferred from the state to the city.

For months the Bearden area has been awaiting word from the Tennessee Department of Transportation about transferring a small piece of right-of-way on Kingston Pike to the city. The idea is to create a “pocket park” to honor the Everly Brothers at the corner of Forest Park and Kingston Pike in front of the Earth Fare.

While it would be hard to establish a true “hometown” for the Everly Brothers since the family moved around the county so many times, certainly Knoxville has a large claim to their teen years and their start as a duet in the music industry.

Local citizens are working to plan the park, securing materials and helping to design the park. TDOT has built a retaining wall at the location in preparation for the park.

“We met with the East Tennessee Community Design Center, getting a park plan and we got a contribution of rock from the old Ace Hardware for the park from Aldi’s Market. They are getting ready to building on the Ace site,” said Terry Faulkner, President of the Bearden Council.

“We will be preparing in the meantime for our fundraising efforts this spring, hopefully,” Mrs. Faulkner said. She said she assumes “everything is a go.” She’s been waiting to hear from Joe Walsh, City Parks and Recreation Director, on the status of the project.

Several Bearden leaders and residents have been active in promoting the park, including Faulkner, Dennis Owen, and City Councilman Duane Grieve.

A press conference is being planned to announce the fundraising kick off, which might fund a plaque or monument there.  Recently trees have been planted at the proposed park site.

The Everly Brothers attended West High School for two years in the 1950’s when their family lived in Knoxville briefly. The famous Rock and Roll Hall of Fame members, Don and Phil, lived in a home near Sutherland Avenue and in Sequoyah Hills while in school.

Both performed on “The Cas Walker Show” playing traditional country music. When they began performing Rock and Roll they were fired by Walker. The brothers moved to Nashville after Don graduated from West and began their music career.

The city may make an announcement at any time about the property transfer. Joe Walsh told The Focus recently that the state sent the request for the property back to the city with a few questions.

“We answered them and resubmitted them for their approval,” Walsh said, adding, “I’m guessing a few months on final execution, based on past experiences.”

Knoxville has a long history of country music and there’s a walking tour of various buildings and sites down town.

The Cradle of Country Music Park, also known as the Treble Clef Park, is located at the corner of Gay and Summit Hill. Inscribed on a monument in the little park were the names of notable music performers from the Knoxville area or who performed here. The monument was removed in 2009 and the bronze plaques with names are apparently being preserved at the East Tennessee Historic Museum with the idea of displaying them again. Today the downtown park has the tall “Envious Composure” sculpture by Albert Paley.

Supporters of the “Everly Brothers Park” hope to eventually place a monument or plaque there to the famous brothers. Although the duo only spent 2 years in Knoxville, they obviously left a lasting impression.