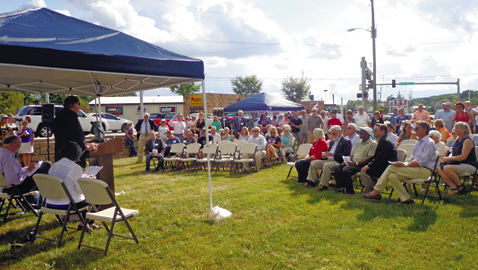 With those words and the words of Mayor Madeline Rogero, Councilman Duane Grieve, President of the Bearden Council Terry Faulkner, and Executive Director of Legacy Parks Foundation Carol Evans,  the first community park in Bearden was dedicated on August 7.

Owen said arrangements were made for Don Everly to attend but the surviving member of the legendary singing duo called the day before the dedication and said he was unable to attend.

“He’s fine,” Owen said and hinted at a possible September visit by the rock and roll icon. He said another Bearden Council member, Amy Midas, spoke to Phil’s wife Patti, who said she and her family thought this was a wonderful tribute.

“We had a vision some time ago about what this old gas station was and what it could be. This is really the hub of Bearden. It’s a pocket park with a connection to the greenway — this could really be a start with what could happen,” said Councilman Grieve.

“If you’ll notice the green trees in the back, we hope to have those lit for Christmas Time in Bearden,” he said.

“This has definitely been a partnership between the city, the state and the Bearden Council. There’s been a lot of work by a number of different people. The idea came up in a brainstorming session that the Everly Brothers could be commemorated in this particular area,” Grieve said.

“This is all about partnership,” Mayor Rogero said and she gave “a big shout out to TDOT” and recognized Steve Borden, Regional Director of the Tennessee Department of Transportation, for his effort in securing the former filling station site in a lease agreement with the city.

“I love the fact that it’s for the Everly Brothers. How many of you grew up singing and dancing to them?” she asked and a dozen or so hands were raised by the hundred or so residents who filled the park that hot, sunny Friday afternoon.

Legacy Parks is acting as financial agent for the Bearden Council’s efforts to raise money and Director Evans told those attending “an acre of park land in your back yard is as important as thousands of acres in the Smokies or elsewhere.”

“Thank all of you for making another piece of heaven,” Evans said.

“Neighborhoods and business representatives came together in 2002 to implement the MPC’s Bearden Pedestrian Village. Since then we’ve added 5.5 miles of greenways and sidewalks, 900 trees, and seven transit stop shelters,” said Faulkner. She said the Bearden Council has also added historic markers and the goal is to create a safe and pleasant environment.

She also applauded the efforts of Councilman Grieve, TDOT, the mayor and city council. She said that TDOT has been “extremely supportive” in funding for landscaping, sidewalks, a transit stop, and building the decorative wall at the park. She also recognized the participation of the East Tennessee Community Design Staff, Visit Knoxville, and the Arts and Cultural Alliance.

The Bearden Council then made a special presentation to TDOT’s Steve Borden.

“He said to tell his classmates (at West High School) that he had a blast and that Knoxville was the first place that felt like home,” Owen said.

Contributions are aptly named: $5,000 is Hall of Fame, $2,500 is Platinum, $1,000 is Gold, $500 is Silver, $100 is Vinyl and lesser contributions are welcomed. The money is earmarked for the Everly Brothers Park and plans may include an entrance, benches, a statue, and possibly a permanent stage platform.

There was some talk among the crowd about possibly doing a fund raiser with local bands and entertainers singing songs written or recorded by the Everly Brothers.

Everly Park is located at the corner of Kingston Pike and Forest Park Boulevard.