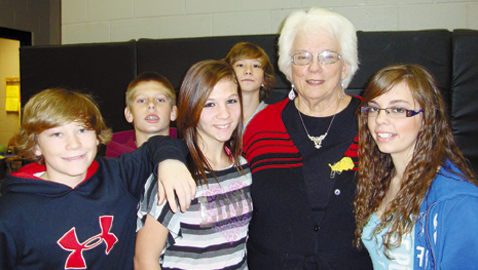 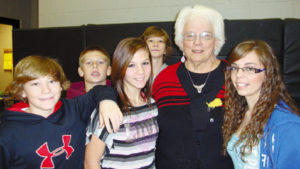 By Sarah Baker
bakers@knoxfocus.com
Powell Middle School received a special guest on October 16.  Linda Hooper, former principal of Whitwell Middle School, came to speak to the student body about the extraordinary project her students started back in 1998.  The “Paper Clips” project inspired a now famous, award-winning documentary.
Whitwell is in Southeastern Tennessee, a little over two hours from here.  Hooper explained to students that in Whitwell at the time, there were no Jews, no Catholics, and very few black or Hispanic people.  Most of her students could not afford to do much traveling.  She wanted to teach them about diversity and tolerance, so she asked one of her teachers to teach a class about the Holocaust.  Because it is really hard to comprehend six-million lives being taken, the students decided to collect six-million paper clips so that they could see with their own eyes what six million looks like.  They would know that each paper clip represented someone real, someone with hopes and dreams just like they had.
Students chose to use paper clips because they learned that Norwegians wore them on their lapels during World War II as a silent protest against Hitler.  They sent letters to news organizations and celebrities.  Eventually the story of Whitwell appeared on “NBC Nightly News” and in the Washington Post.  They received paperclips from twenty different countries and from celebrities such as Tom Hanks, Steven Spielberg, George W. Bush, Bill Clinton, and Bill Cosby.  Ultimately, they collected 29 million paperclips.
“This speech meant a lot to me because it helped me to see that you can show honor to people many ways and to always think of others and not just yourself,” said Haley Headrick.
Powell Middle School Principal Gary Critselous invited Linda Hooper to speak as part of the school’s Panther Promise Program, a school-wide initiative to build character in students.  The program concentrates on four ideas:  pursuing goals, partnering with others, practicing kindness, and picking a positive attitude.  Tierra Giles, one of the eighth grade Panther Promise representatives at Powell Middle, said, “Who knows you might start a chain reaction?”
Critselous felt that Hooper’s message of tolerance fit very well with the Panther Promise.      “I had watched the “Paper Clips” video several times over the past 10 years and enjoyed it very much,” said Critselous.  “What an honor and treat it was to meet Mrs. Hooper and have her speak to our students at Powell Middle School. It still amazes me what they accomplished with the Paper Clip Project!”
The Book of Luke speaks of what we can do if we have faith the size of a mustard seed, and I know it must be true.  Look at what some kids from our own state accomplished with faith the size of a paper clip.