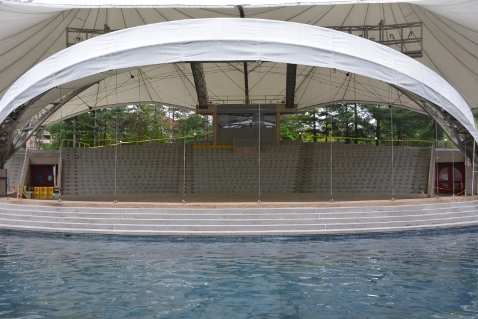 An amphitheater with no chairs and a lake that is broken. Just part of the problems at World’s Fair Park.

Pull up a chair…you will need one

The lake at World’s Fair Park is broken. On Tuesday, the head of the Public Building Authority, Mr. Dale Smith, discussed with the board of directors a number of current items that need repair in the park. The most urgent being the need for a new liner for the man-made lake at World’s Fair Park. According to Mr. Smith, the cost to repair the fake lake will cost about $500,000. That cost is just for replacement of the liner. Whether or not the City of Knoxville will implement other upgrades during the opportune time of the repair has not been discussed. Such items could include new lighting, new fountains and new technology,

What many people might not realize is that the man-made lake goes over Second Creek.  We asked Mr. Smith if it was more economical just to allow the natural Second Creek that flows under WFP via a tunnel to once again flow openly and naturally. Mr. Smith gave us this detailed response. “There is no way to re-open Second Creek without wiping out about half of the festival lawn (north lawn) and about half the performance lawn (south lawn).  There’s also a major KUB line that runs parallel to the box culvert that holds Second Creek, which would pose a real problem if you tried to create an acceptable slope on both sides of the creek.”

Further adding to the problems at WFP is the aging amphitheater.  Recently the PBA removed all the seating in the amphitheater due to both safety reasons and also for allowing a quick install of new seats.  However, that process has run into a roadblock.  According to Mr. Smith, the amphitheater seat bids came in seriously over budget. The PBA is now working in a collaboration involving top city officials to find a more economical solution. One possibility is installing aluminum bench seats with no backs.  Once a final decision happens then the project will be put out to bid.

Also of note is that the canopy also is in need of repair. PBA will be patching a few areas of concern with the amphitheater canopy, as the replacement will require additional planning and funding, which cannot happen in the current budget plans.

Finally, in regards to renovations needed at the performance lawn, Mr. Smith had this to say: “We are just starting to look at options for the drainage concerns on the Performance Lawn.  Any lawn that has as much traffic, equipment, and events on it as this lawn needs a better drainage system to allow us to sustain it.  We host many events and will be reviewing similar venues and applications that have proven effective elsewhere.  The costs would be hard to identify at this point as the scope is not yet clearly defined.  We’d been asked to hold off on dealing with this by the City when they were considering putting the Clarence Brown Theater on the Performance (South) lawn.  That’s why we have not yet designed and developed a budget for that work.  Since they’re still discussing what they want to do with the ULI recommendations, we’re still on hold until that process is complete.”

We at The Focus will continue to monitor this ongoing situation.