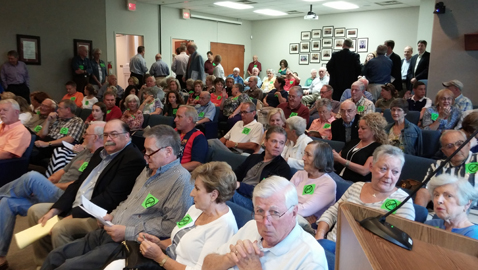 The process took two hours of public hearing but when the dust settled and the Farragut Municipal Planning Commission voted Thursday night, the body did not recommend the development of 22 acres for a 220-unit apartment complex.

The 6-2 vote came with few questions from the planners but many comments from both sides of the request, which is to rezone from low residential (R-2) to high residential (R-6). Continental 333 Fund was asking for the change with the idea of building an upscale development on property owned by Doug Horne on Smith Road just off of Kingston Pike. The matter, however, isn’t settled and the planning commission’s recommendation not to change the zoning now goes to the Farragut Board of Mayor and Aldermen.

The planning commission meeting was standing-room only as citizens packed the room in the town hall and the crowd even spilled out the door into the main hallway.

Most of the meeting involved statements by various citizens including Horne and much of the subject was the town’s Comprehensive Land Use Plan which was adopted in 2012. Opponents of the rezoning claimed that the proposed development violated several parts of the Land Use Plan.

“Will the town uphold the plan?” asked Michael Wilson of the Baldwin Park neighborhood. Wilson also said that if the commission allows the development, then it could not reject similar applications for development of 19 other sites in the community.

John Baker of Horne Properties said the Land Use Plan was “a guide, not a law” and reminded the audience that many of them live on property that was, at one time, owned or developed by Doug Horne.

Horne, whose community involvement was praised by both sides, said the $37 million apartment development would allow new residents to walk to shopping.

“I’m one of you people. We’re overlooking the dynamic young people and investors and developers coming to this town,” Horne said.

Horne said that his attorney had advised him that he could file a law suit if the project is rejected and he said he would not.

FMPC member Noah Myers said, “I’m guilty. The creation of the Comprehensive Land Use Plan has been elevated to the Holy Grail.”

John Minahan, Continental’s Director of Development, described the changes that have been made with the plans since initially introduced and noted that additional property has been added and the density reduced. He said the apartments would not decrease property values and said, if passed, the planners could put caps on the number of units per acre.

“What you don’t see here is the number of people who support it,” he said and referred to the Farragut Business Alliance and the Farragut Economic Development Alliance. He said the gated development would have very little impact on the community.

Several Farragut residents commented on a traffic increase on Smith Road and Christy Hold, President of the Village Green Home Owners, said the development “does not fit with the character this town was founded on.”

Bill Johns said he spoke to represent those citizens who support the development but “who are intimidated to come” to the meeting and said the business leaders were ill-treated by the opposition.

In the vote, which took place with only a few planners commenting, Mayor Ralph McGill’s “No” vote drew an applause.

Following the vote to recommend denial, which drew loud applause, Myers asked that the planners have a special meeting to revisit the Land Use Plan.

The town board meets September 10 and the Continental development request could be on the agenda. The board consists of the mayor and four aldermen.