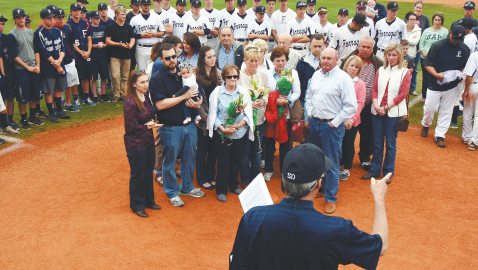 Photo by Dan Andrews.
Farragut public address announcer Ralph Skinner honors Scott Dean at a recent ceremony where Dean’s number was retired and the baseball field house was named in his honor. Pictured are Dean’s family and members of the Admirals baseball team. Dean, who played and served as an assistant coach at FHS, died suddenly in January.

Dean, who died in January after suffering a heart attack at age 28, had his number (5) retired in a ceremony following the Admirals’ 10-2 victory over William Blount on Friday, April 18.

The school also dedicated its field house, which is home to its indoor batting cages, in his honor. The facility is now called the Scott Dean Field House.

Dean, a catcher for the Admirals, went on to play collegiately at Lincoln Memorial University in 2005. He later transferred to the University of Tennessee where he served as the baseball team’s bullpen catcher in 2007 and 2008.

He returned to his alma mater to coach in 2010.

“Scott was one of our first former players to come back and coach,” said Ralph Skinner, the public address voice for Farragut High School baseball. “I knew Scott since he was eight or nine. He was like family to me.

“This [retirement and dedication ceremony] was really tough but I was terrifically honored to be a part of it. We had Scott’s family standing at the plate and his mom told me that was the first time that she’d ever been at the plate. The Deans are like family to me.”