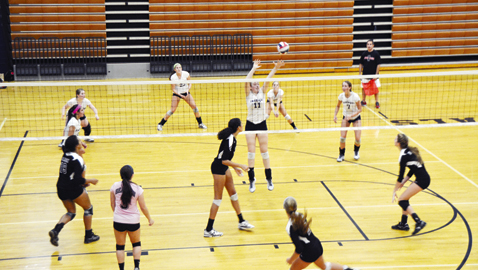 Farragut High School is perched atop the District 4-AAA volleyball standings and undefeated in league play.

The Lady Admirals (28-4 overall, 6-0 in the district) claimed sole possession of first place with a pair of straight-set home victories at the Lynn E. Sexton Gymnasium Thursday night.

Farragut opened the night with a 25-3, 25-7 win over West and got a long break while rival Bearden was embroiled in a three-set thriller with Hardin Valley Academy. The Lady Bulldogs outlasted the Lady Hawks 13-25, 25-17, 25-22 before tangling with the Lady Admirals in a showdown for first place.

Although the Lady Admirals prevailed in that match, it was far from easy. Farragut weathered a roller-coaster ride before prevailing 25-20, 25-22.

“Bearden is a great team and [Lady Bulldogs coach] Dave [McGinnis] does a great job with them over there,” Farragut coach Susan Davidson said.

Farragut and Bearden (25-6, 5-1) battled fiercely in a see-saw affair before the Lady Admirals finally seized the upper hand. Farragut got some separation late and took possession with a 22-19 lead.  Natalie Hartman served up the next two points and had an ace to make the score 24-19. The Lady Bulldogs and Lady Admirals then traded side-outs to end the game.

The second set proved to be more of the same as Bearden, which finished fourth at last year’s Class AAA State Tournament, put up another valiant effort.

Farragut darted to a 3-0 lead as Tessa Watson, a senior setter, served up the first three points of the set. The Lady Admirals opened an 11-6 lead before Bearden answered and took a 13-12 lead as junior Carrie McGinnis, an all-state performer in 2012, scored three consecutive points. Farragut battled back and took a 14-13 lead.

From there, things really got crazy. With the set tied at 18, Farragut would score the next two points to take a 20-18 lead. The Lady Admirals scored five of the last nine points and Hartman closed out the match with the final point.

The outcome might have been a little different if not for Bearden’s service errors.

“I think we played well enough to win the game,” Coach McGinnis said. “We had four missed serves in that second set and those missed serves killed us.”

Lady Bulldogs defeat Lady Hawks 13-25, 25-17, 25-22: Bearden overcame a rough first set that saw Hardin Valley’s Amanda Hylton score the first eight points. The Lady Bulldogs couldn’t dig themselves out of that hole. But they stormed back to even the match before winning a thrilling third set in which they erased a 13-6 lead.

Coach McGinnis said that the comeback victory was huge for his squad.

“That one probably kept us in the district race,” he said. “I’ve been in this district for two years but I know how tough it is.

“With these two teams [Hardin Valley and Farragut], there’s no way that you can lose two games and win it. We played up hill all night.”

Lady Hawks’ coach Mike Rosenke, who has seen his team battle injuries all season, couldn’t complain about his squad’s effort.

“You can’t really be disappointed with our effort,” he said. “This was the first night that we’ve had everybody together.

“We’re going to take this and learn from it. It was a good game and it could have gone either way.”