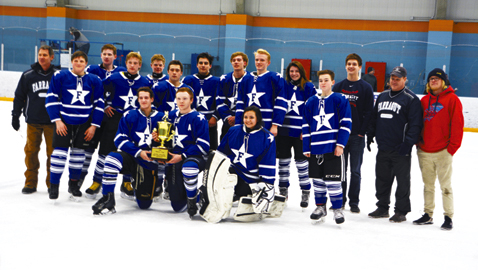 The Farragut Admirals hockey club celebrates its Moore Cup Championship Thursday night. With the win, the Admirals clinched a berth in the State Tournament in Memphis.

Bearden/Karns first-year hockey coach Aaron Barnes could do no more than tip his hat to Farragut High School Thursday night after his Icedawgs were stunned by the Admirals in the Moore Cup Final at the Icearium.

“They played a great game,” Barnes said of Farragut after it notched a 4-1 victory and clinched a berth in next month’s State Tournament in Memphis. “Their coaches are my friends and I’m proud of them.

While Barnes commended the Admirals, who won just two games during the regular season, he saved his biggest praises for Farragut senior goaltender Tatum Magill, who made 14 saves in her fourth victory of the campaign.

“She played well tonight and what she did was called standing on her head,” Barnes said. “We had our chances and she made some big saves.”

While Magill was at the top of her game, the Icedawgs scored the game’s first goal. Bearden/Karns took a 1-0 lead when Dalton Rodgers scored on the power play with 5 minutes, 57 seconds remaining in the first period.

That goal, which was assisted by Nicholas McGregor, infuriated the Admirals, who answered with a vengeance and scored four unanswered goals en route to recording their second consecutive upset of the Moore Cup Playoffs. Farragut routed the top-seeded Knoxville Knights 8-1 in its first-round game on Thursday, Feb. 12.

“When you get into the playoffs, the fire gets bigger for you,” said Rodgers, a Gibbs High School sophomore who plays football for the Eagles. “This loss doesn’t define our season but they just wanted this one more than us.

“We’ll be back next year and we’ll be hungry.”

While Bearden/Karns looks forward to next season, the Admirals will prepare for the State Tournament in West Tennessee on March 13.

Farragut scored its first marker of the contest when freshman Davis Eichelberger took a pass from Tyler Starling and buried it past Icedawgs goaltender Braden Ross with 2:42 left in the first period. The equalizer represented the final scoring of the opening frame of a game that featured two of the county’s top netminders.

Magill, Ross and their respective defenses stole the show in the second period before Farragut freshman Kenny Richter gave his squad a 2-1 lead with an unassisted goal with 43.9 seconds remaining in the frame. Richter’s first shot hit the post but he promptly took the rebound and banged it past Ross to put the Admirals ahead for good.

Richter’s marker gave the Admirals a shot of momentum going into the locker room at intermission.

After the break, Farragut scored a pair of quick goals and sealed their first trip to the State Tournament since it culminated an undefeated season and won the tournament in 2013.

Defenseman and senior captain Kyle Lindsay gave the Admirals a 3-1 lead just 39 seconds into the final stanza. Farragut then scored its second goal in a 14-second span when Eichelberger, a freshman, tallied off an assist from senior defenseman Brandon Timmis.

Thursday night’s victory put an exclamation point on a season that was filled with adversity for the Admirals. Coach Jeff Lindsay likened his team’s 2014-15 season to a popular sports movie.

“It’s like Ricky Bobby [said in Talladega Nights], ‘If you’re not first, you’re last’ and we’ve been both this year,” coach Lindsay said.  “It’s not where you start, it’s where you finish.

“I think we started 0-5 or 0-6 before we won our first game but we’ve been building up to this all season.”

Magill said she’s looking forward to another trip to the State Tournament.

“We knew coming into this game that we wanted to go to state and win,” she said. “I went to the state and won it with my team.

“I’m excited because we haven’t been in school all week [due to a winter storm that hit the Knoxville Area last week] and because we’re going back to state.”