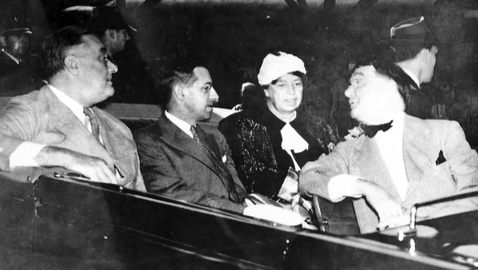 President Franklin Delano Roosevelt came to Tennessee several times during his presidency.  It gave local politicians the opportunity to bask in the glow of Roosevelt’s magnetic presence and the people of Tennessee to actually see the jaunty tilt of FDR’s large head, cigarette holder firmly clenched between his teeth.  The popular image of Franklin Delano Roosevelt remains indelible in the minds of those remaining who were alive during his presidency.  Many still remember his voice, frequently warm and compelling during his famous “fireside chats” with the American public.

Kenneth D. McKellar, Tennessee’s senior United States senator, while promoting Roosevelt’s candidacy for a third term, described FDR as “inordinately popular” in Tennessee.  McKellar, having a strong distaste for privately owned utilities, was appalled by the candidacy of Republican Wendell Willkie, an attorney for Wall Street and the private power interests.

Franklin Roosevelt used the power of incumbency shrewdly, oftentimes making nonpolitical trips that were little more than campaign appearances.  One such appearance was in Chattanooga, Tennessee in September of 1940 when the president came to dedicate Chickamauga Dam.  The presidential motorcade included First Lady Eleanor Roosevelt, Governor Prentice Cooper, and Senator McKellar, who introduced Roosevelt to the crowd of some 30,000 persons.  Roosevelt, McKellar and Cooper were all running for reelection in Tennessee at the time.

Roosevelt had visited the site of the dam two years earlier when construction had just begun on the Chickamauga Dam.  The structure, running more than a mile and 125 feet high, was an impressive achievement, yet another marvel of the Tennessee Valley Authority.

The addresses were all widely carried over radio, which was the primary electronic medium of the time, as well as carried in newsreels, which played in movie theatres across the country.  Seventy-one years old in 1940 and running for a fifth term, Senator McKellar made a very brief introduction of the president.

“Mr. President, ladies and gentlemen,” the senator cried, “it gives me the keenest pleasure and the greatest delight to present to you the great author of the Tennessee Valley Authority who is here with us today.

“He has always been the friend of Tennessee and Tennesseans, just as he is the friend of all the people of this country.  I present to you the President of the United States, Franklin D. Roosevelt!”

President Roosevelt, wearing the leg braces that enabled him to give the illusion he could walk, got up and spoke to the masses that welcomed him enthusiastically.       The President reminded his audience he had been there before, saying, “I am glad to come here today, especially because I took part in the laying of the cornerstone of this dam some years ago.”

Roosevelt went on to describe the importance of the dam in the eloquent language the Squire of Hyde Park had mastered long ago.

“This chain of man-made inland seas may well be named ‘The Great Lakes of the South.’ Through them we are celebrating the opening of a new artery of commerce, new opportunities for recreation – – – I see all these new powerboats right here, almost at my feet as I speak.  We are celebrating relief from the desolation of floods, and new lost-cost energy which has begun to flow to the homes and farms and industries in seven American states.”

From the dedication of the Chickamauga Dam, President Roosevelt and his party moved on to the Great Smoky Mountains National Park for yet another dedication ceremony.  The ceremony was set for 5:00 p.m., but cars had been gathering as early as seven that morning.  Just hours later there was no parking for automobiles and those wishing to attend the ceremonies had to be shuttled in school buses.  By that evening 10,000 persons waited for the arrival of the President.

The presidential limousine, with its top down, rolled slowly past the thousands lining the route as FDR held his hat above his head to acknowledge the applause and grinning faces.

There was security for the president, but it was a different age and FDR enjoyed the throngs of people, despite having survived an assassination attempt even before he took the oath of office.  Few people seem to recall the attempt on Roosevelt’s life, which occurred in Miami, Florida.  FDR had just made a speech at the Bayfront Park when an Italian immigrant, Giuseppe Zangara, screamed, “Too many people are starving!” and opened fire.

The bullets missed Roosevelt, but Chicago Mayor Anton Cermak, standing near the president, was not so lucky.  Wounded in the abdomen, FDR clutched Cermak to him and warned him not to talk and the mortally injured mayor was whisked away to the hospital where he died later.

Zangara had been overpowered by men in the audience and would likely have been pummeled to death had not FDR urged them to spare him and let justice take its course.  The assailant later claimed he had no personal animosity for Roosevelt; he simply hated all public officials and the wealthy.

When Mayor Cermak died, the charges against Zangara included murder and he was strapped to the electric chair and executed March 5, 1933, one day after Franklin D. Roosevelt was sworn in as President of the United States.

At the Great Smoky Mountain National Park ceremonies, Governor Prentice Cooper and North Carolina Governor Clyde Hoey both spoke to the crowd, along with Secretary of the Interior, Harold Ickes.  Senator McKellar, wearing a tan suit and black bowtie, sat behind the President as Roosevelt began his speech.  Senator McKellar had conducted a bitter open feud with J. Ross Eakins, the Superintendent of the Great Smoky Mountains National Park.   McKellar’s feud with the Park Superintendent seemed forgotten as he sat behind the president, one leg crossed over the other.  The scene was saved for posterity and became a very popular postcard.

Once again, FDR’s magnificent voice, never forgotten by those who lived through the days of despair during the Great Depression, rang out and mesmerized his audience.  Deftly touching his listeners, which included a national audience via the radio, Roosevelt went on to describe the importance of the park to the multitudes.

President Roosevelt had been to Tennessee in 1936, yet another election year and FDR himself was seeking reelection.  The presidential party left Washington, D. C. the evening of September 8 by train and arrived in Knoxville the next morning at the old Southern Railway Depot.  Thousands of people waited to catch a glimpse of Franklin D. Roosevelt and among those waiting to greet the president were Tennessee’s senators K. D. McKellar and Nathan L. Bachman, as well as Governor Hill McAlister and J. B. C. Erhinghaus, governor of North Carolina.  Once the president had eaten his breakfast, the party set out along Old Sevierville Pike towards Gatlinburg.  It was likely during this visit Roosevelt saw and admired the massive Church Street Methodist Church.

The President supposedly said it was the prettiest church he had ever seen, quite a compliment from one who frequently fancied himself an efficient amateur architect.

In an age where television did not exist, one did not have the opportunity to see a President of the United States very often and Sevier County schools had closed to afford children the opportunity to stand by the roadside and wave as Roosevelt passed by.  The town of Sevierville was appropriately decorated for the first president ever to visit the hamlet.

The presidential motorcade made its way to Clingman’s Dome where the manager of Knoxville’s Andrew Johnson Hotel (which now houses Knox County’s own school administration) had filled a truck full of food to feed President Roosevelt and his party.  FDR loved food, although his White House was notable for serving positively dismal meals.  Some speculated the White House housekeeper, one Mrs. Henrietta Nesbitt, was some form of Eleanor’s revenge upon her husband.  In fact, many of those who dined at Roosevelt’s White House frequently ate before attending soirees.  Roosevelt plotted to rid himself of the hated Mrs. Nesbitt, which First Lady Eleanor Roosevelt would not countenance.  The imperious Mrs. Nesbitt had no compunction in countermanding the Commander In Chief’s orders; for one of his inaugurations, FDR asked for chicken ala king to be served to his guests.  Mrs. Nesbitt snapped it would be impossible to keep the food warm and announced, “He’ll get chicken salad.”

President Roosevelt complained about being served salt fish four times in one week for lunch and warned Eleanor he might “bite” a foreign power if he was served another sweetbread.

Mrs. Nesbitt’s undoing came when she crossed the peppery Harry Truman when she insisted upon serving Brussels sprouts too frequently.  The little man from Missouri sent an astonished Mrs. Nesbitt packing.

President Roosevelt was likely not disappointed by a luncheon fare that included fried chicken, crab salad, cheese sandwiches with caviar, and sardines and crackers.  The president was observed contentedly smoking a cigarette in his famous holder after having eaten, enjoying the magnificent view.

Governor McAlister wondered what the President thought of the Great Smoky Mountains National Park and FDR replied that he thought it most impressive.  The President went on to speculate there might be too many tourists to visit “before we are ready for them.”

Following lunch, Roosevelt’s car was rearranged, with the governor of North Carolina, J. C. B. Erhinghaus, taking Hill McAlister’s place as the motorcade stopped in Cherokee.  There the President was greeted by the Chief Jarret Blythe, who performed a ceremony making FDR an honorary chief of the Cherokee Nation, replete with feathered headdress.  The presidential party went on through a number of North Carolina towns as it headed towards Asheville.

President Roosevelt had come to Nashville, Tennessee on November 17, 1934 at the invitation of Congressman Joseph Byrns, Speaker of the House.  On the way to his retreat in Warm Springs, Georgia, Roosevelt decided to stop off in Nashville.  Apparently the biggest crowds ever assembled in Nashville poured out into the streets to view President and Mrs. Roosevelt.  The President visited the Hermitage, the home of one of Tennessee’s most famous native sons, General Andrew Jackson.  President and Mrs. Roosevelt also stopped at Fisk University to hear the chorus perform a special concert, just after an ugly incident.  A young black man had allegedly struck a white child with his bicycle and was later dragged out of his home and lynched.

Naturally, some Tennessee Democrats were appalled that the President would make a stop at Fisk University, while not visiting all-white Vanderbilt.

Franklin Delano Roosevelt remains one of America’s most iconic chief executives.  His visits to Tennessee were not only historic, but were numerous, especially when one considers he did not have the freedom of movement of other presidents.