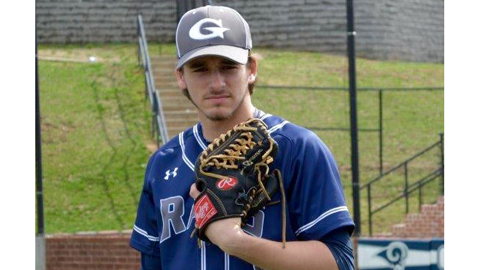 Recent Grace Christian graduate Tanner Fee, who toiled in obscurity during his first two years of high school baseball. closed out his prep career on top of the baseball world as he helped the Rams win the 2015 Class A State Championship.

Tanner Fee recently concluded a stellar and magical high school baseball career. He and others led Grace Christian Academy to a Class A State Championship.

Fee, who was the District 3-A Co-Pitcher of the Year in 2015, has also received statewide honors. In 2014, he and the Rams reached the State Championship but came just short of a title, which they ultimately won recently.

“It [the State Championship] was just awesome,” Fee said.  “It felt good to finally see the fruits of my labor.”

The state title was certainly special but it was made more so from the heartbreak that Fee and the Rams had to endure the year before.

“We came back and we worked almost as soon as the [2014] season was over,” Fee said. “We even worked during the dead periods. We couldn’t be with the coaches then but Chandler Adkins and I got the team together and we all worked out together.”

Adkins and Fee were both named to the Tennessee Sportswriters Association All-State Team recently but Fee wasn’t always sure about his future in Grace Christian’s program.

During his first two years at Grace, Fee toiled in obscurity. But that all changed in 2014 when Mitch Turner replaced Brian Hochevar as head coach.

“The first two years didn’t quite go as well as I hoped,” Fee said. “But when Mitch came in, he saw something in me.”

What Turner saw was a player with tremendous work ethic.

“I would work out with the biggest guys on the team,” Fee recalled. “Some days I could keep up with them and on other days, I couldn’t but I always worked hard.

“The thing that I remember and the thing I think Mitch saw was how hard I worked. He saw this and he started to give me confidence. He had a big impact on me.”

Turner also had an impact on the rest of the team thanks to his own work ethic.

“It’s just crazy, in a good way, how he works,” Fee said of his high school coach. “He’s a talker and he’s always excited. But he backs it up, too.”

Fee credits Turner for his success as the coach helped the player go from barely being noticed to becoming an all-state standout. During his junior year, fee struggled at the plate but starred on the mound as he went 9-2 with a 1.24 earned run average and 91 strikeouts.

Championship teams are always special and Grace’s 2015 squad was no exception.

“This team was special and the thing that was so special about this team was, that with Mitch, we kept Christ at the center of everything we did,” Fee said.

Fee, who will continue his baseball career at Trevecca Nazarene College in Nashville, also credits his parents for his success on the baseball diamond.

“I got my work ethic from my parents,” he said. “They also taught me that baseball was a sport and not my whole life. They taught me how to leave baseball on the field when I came home.

“We would talk about baseball a little bit, but then after that, I went on to do my homework or something else.”

Fee said that his first two seasons with the Rams were difficult but he seems to harbor no bitter feelings.

“I will always know that God has a plan and I know that things happen for a reason and I will also know that Mitch is a great part of my life.

“God will always have a plan for me whether I play baseball or not.”