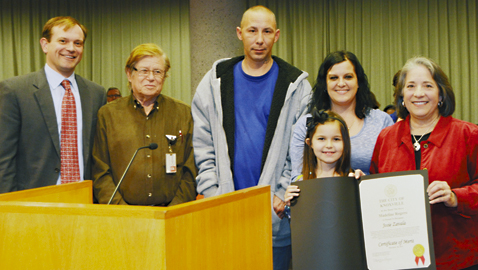 Photo by Dan Andrews.
Josie Zavala is presented a Certificate of Merit by Knoxville Mayor Madeline Rogero. Pictures, left to right, are Councilman Marshal Stair, Jack Mooney, Joe Zavala (Josie’s father), Teresa Lowe (Josie’s mother) and Josie and the mayor. Jack and Mae Mooney were credited with teaching Josie how to use 911 at a Safety City class.

Knoxville’s fire department became the first in the state to receive Chemical, Biological, Radiological and Nuclear Hazardous Materials certification and the honors were presented a special meeting of the city council Thursday evening.

“This is a big deal,” said David Purky, director of the Tennessee Emergency Management Agency as he recognized Knoxville Fire Chief Stan Sharp, the Knoxville HAZMAT team, and the fire department for achieving the program when other municipalities in the state tried but did not.

“Your department has taken the steps to be number one!” Purky told the council and a number of Knoxville firemen present. “You all have set the standard.” He said the local fire department could not have achieved the honor without the assistance of other departments like the Knoxville Police Department, the city’s Services Department, Public Works, and the officials and staff at the Knoxville Utilities Board.

Chief Sharp said the certification took a lot of hard work and lots of training by the city HAZMAT team.

“It wasn’t just the fire department; we had a lot of help from other departments in the city,” he said, “Including KEMA, the Knoxville-Knox County Emergency Management Agency.” He added that all of the local HAZMAT team will be receiving individual certificates of appreciation and a unit citation.

The city council also took time to recognize the efforts of a second grader and two Safety City instructors, led by Councilman Marshal Stair. The girl and her parents were presented to the council as well as two instructors who had taught the child about safety in emergencies.

Eight-year-old Josie Zavala, a student at Inskip Elementary, was at home in August with her brother, being cared for by a babysitter when the sitter became ill and non-responsive. She called 911 and worked with the operator until the babysitter was taken to the hospital. When Councilman Stair asked Miss Zavala where she had learned about calling 911 the girl said, “Safety City.”

Mae and Jack Moody are Norwood residents and both are training specialists for Knoxville 911. Mae said they worked at Safety City with 2nd graders.

“She was in Jack’s class. When I saw it on the news I though she needed to be recognized,” Mae Moody said adding, “It’s a good program and it works.”

“I think this is a great example of the city working with 911 and working with the young people in our community to maybe saving the babysitter’s life,” Stair said.

Mayor Madeline Rogero then presented the girl and the Moodys a certificate of merit.

In other action, the council confirmed the appointment of County Commissioner Jeff Ownby and the reappointments of Louis Crossley, Beth Waters and Shannon McCullock to the Board of Directors of Community Television of Knoxville.

The council postponed any action on objections to the location of a Dollar General Store on Amherst road until their January 20th meeting, allocated an additional $73,297 for building abatement and demolition at Lake Shore Park, added another $120,000 for a new contract at Lakeshore, approved a three year lease with Westminster Regency, LLC, for office space for the Fire Department, and authorized an additional $24,088 to increase the number of time-collection devices with Kaba Workforce Solutions.

The city also authorized the mayor to enter into a contract with Accela, Inc. on the first phase of a city-wide work order management software system, not to exceed $980,559.