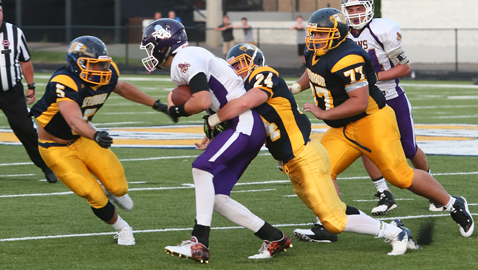 PHOTO BY JEREMEY KWASNEY
Reid Taylor, Seymour linebacker, has a TKA ball carrier in his grasp during the Eagles’ 44-26 win over the Lions Friday night in The Battle of Boyds Creek. Seymour’s Austin Brewster (left) and Matej Grycz also close in on the play.

The King’s Academy players had named it The Battle of Boyds Creek, but Seymour High players celebrated the victory Friday night in the first football game ever played between the two schools.

The Eagles, with their offensive line leading a strong rushing attack, pulled away from the Lions 44-26 at Benton Householder Stadium in the season opener for both teams.

The two schools are so close – just across Boyds Creek Highway from each other – The King’s Academy team and many of its fans literally walked from the TKA campus to the game site.

“They named the thing the Battle of Boyds Creek as soon as they figured out they were playing us,” recalled Seymour quarterback Clayton Ogle, a senior captain who had a big hand in the special win. “They had shirts going along with it. They had everything promoting it.”

The Eagles, meanwhile, took a low-key approach to the new rivalry.

“We kind of set back and let our game develop,” said Ogle. “We waited until we knew we had the preparation to beat them.”

The spirited contest was action packed – filled with a lot of scoring plays but also many personal fouls and unsportsmanlike conduct penalties. Although there had been some heated words exchanged during the game, the two teams shook hands before parting ways.

Six different players scored touchdowns for Seymour, which jumped out to a 22-6 lead in the first quarter and extended the margin to 30-6 early in the second quarter.

The King’s Academy didn’t let the game become a rout. The Lions scored twice to pull within 30-19 at halftime and were still close (36-26) with 4:50 remaining in the third quarter. But they couldn’t get any closer.

“We handed the ball to a lot of different players and that line just kept blocking. I thought Jeremy Bryant had an exceptional game and ran really hard.”

“They controlled us at the line of scrimmage, particularly offensively. We have to run the ball better as well.”

Lowe did praise his team’s competitiveness.

TKA struck back quickly as Isaiah Gilmore scored on a 44-yard run around right end. Ryan Louallen pulled down Phillip Sellers on the extra point attempt to keep Seymour on top 8-6.

Devante Farmer matched Gilmore’s TD with a 39-yard run around right end of his own to put the Eagles up 14-6.

The King’s Academy appeared to run a fake punt on its next possession but came up short.

Taking over at the TKA 45-yard line, the Eagles overcame a 7-yard loss and 15-yard personal foul penalty to sustain a scoring drive that was capped by Minefield’s 1-yard run up the middle. Jeremy Bryant stretched the ball over the goal line for the extra two points, giving Seymour its 22-6 lead with 2:14 left in the opening quarter.

A short punt (11 yards) by the Lions gave the Eagles good field position again. Seymour capitalized on it when Ogle hit Hunter McClary with a 25-yard touchdown pass. On the play, Ogle scrambled to his left, and then threw back across the field. Isaiah Johnson’s 2-point run made it 30-6 with 9:27 remaining in the second quarter.

A pair of touchdown passes by sophomore Brandon Burgess, sandwiched around Shawn Hamilton’s fumble recovery, gave TKA new life. Isaiah Jefferson made a good catch on the first one, pulling in a high toss from 3 yards out. A 23-yarder to Gilmore and Nao Shimamora’s PAT kick reduced the deficit to 30-19.

An interception by Ogle set up a huge Seymour touchdown in the third quarter – a 34-yard run by Bryant, increasing the Eagles’ lead to 36-19.

The Lions came back again. Chandler Viscardis snagged a 27-yard pass at the Seymour 1 despite pass interference by the Eagles. Sellers ran it in and Shimamora’s kick made it 36-26 with 4:50 showing in the third quarter.

But the Lions couldn’t stop the Seymour ground attack. Bryant ran seven times for 41 yards in a 70-yard march and Ogle had a 17-yard run to the 10 before Austin Brewster got in from the 1. Ogle’s 2-point pass to Brewster made it 44-26.

The Lions didn’t threaten in their final two possessions.