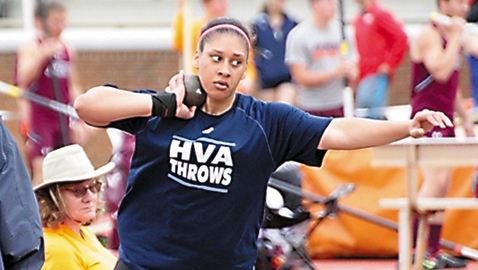 Domonique Williams, Fulton High’s male Student-Athlete of the Year, played on his third straight state championship football team as a senior. He was a two-time All-State selection and signed a full scholarship to Eastern Kentucky University as a defensive back and kick returner.

Williams, also a receiver in high school, earned All-District and All-KIL honors three years and was a District MVP. He also was selected to play in the Toyota East vs. West and Tennessee vs. Kentucky All-Star games.

A four-year letterman in track, Williams ran on the Falcons’ 4×100-meter relay team which won the KIL championship and advanced to the Class A-AA state finals.

Elicia Faulkner, Fulton’s female Student-Athlete of the Year, was an outstanding track sprinter for four years, according to AD Jody Wright, and also lettered in basketball four years. She played on the Lady Falcons’ state runner-up basketball team as a junior and their sectional finalist squad as a senior.

Other Student-Athletes of the Year, as submitted by their respective schools:

Alcoa: Kyle Mitchell (football and track) and Cassidy Anderson (basketball and soccer) are the school’s honorees, according to athletic director Josh Stephens. Mitchell will be going to play football for the Naval Academy. Anderson has signed with Milligan to play basketball.

Berean Christian School: Noah Jordan (soccer) was the District 2 A-AA “Player of the Year” for 2015 and has signed with Johnson University, said Berean’s Chris Lindsay.

Catholic: Jordan Anderson (football and basketball) and Gabriella Prevost (soccer and track and field) will now take their talents to the collegiate level. Anderson has signed to play football at Brown University, a member of the Ivy League, and Prevost has signed to play soccer at Transylvania University, reported AD Jason Surlas. Prevost played on the Catholic girls’ two state championship soccer teams (2013 and 2014).