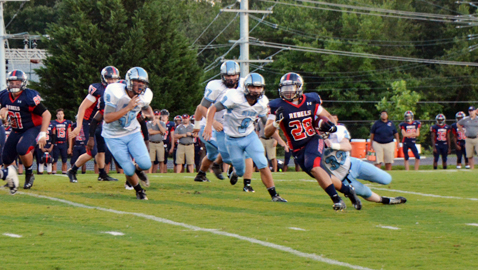 There was an air of familiarity at Central High School Thursday night. Yes, that beloved pigskin with the laces that signals the turn of the calendar, has returned. Ten East Tennessee teams played five games of one quarter each, getting their licks in against each on a beautiful, fall-like evening.

This year the Knoxville Kick-Off Classics were moved to two high school stadiums because the University of Tennessee wanted to preserve its field at Neyland Stadium. Friday’s Kick-Off Classic was played at Bearden High School.

The stands were almost filled to capacity at Central for the Thursday night Knoxville Orthopedic Clinic’s High School Kick-Off Classic. Tickets were $10 with all proceeds going to providing health insurance for the high school athletes.

“Each student is supplied with that insurance from KOC,” Central Head Coach Bryson Rosser said.  “Besides their primary, anything they have on top of that, KOC helps with that,” he added.

Rosser is in his first season at Central and moved down in April from New Jersey, but he is familiar with the area, having served as an assistant at Oak Ridge two years ago.

Rosser complimented the crowd. “To see a crowd like this from the opposite side (of the field) was exciting, and our kids fed off of that,” he emphasized.

West fan Addie Dudak was energized to watch the Rebels play. “It’s the beginning of the school year. There’s a lot of excitement right now,” Dudak said. “Right now, everybody is so hyped. It’s just fun to come and be a part of it and support the West football team and the cheerleaders,” she stressed.

In the games, one team started on offense against the other team’s defense, and then the teams would switch roles if there was a defensive stop, turnover, or score. Each team began its possession at its 30-yard line, and there were no kickoffs.

King’s Academy played the first game against T.S.D. and won 27-6. Carter beat Campbell County 8-0 in the second game. The third game was a defensive battle as West tied Gibbs 0-0. The host team Central won 7-0 over Webb on a 79-yard touchdown run by Stephen Trewhitt. Fulton won the final game over Hardin Valley 14-0.

Fulton Head Coach Rob Black said, “It’s a good chance for a team to come out and play in front of a crowd a little bit, especially these young guys who don’t have a lot of experience,” he said. Black talked about the difficulty of Fulton’s schedule.  “Our non conference games are 6A schools and 5A schools. I want to play good people because again, that prepares you when it comes to playoff time,” he stressed.

West Head Coach Scott Cummings also mentioned the need to get many players in the ballgame. “It feels good to get a lot of kids in, in that quarter,” he said.  “It’s good to get the kids out in front of a big atmosphere, get the nerves over somewhat,” he said. “Bottom line is, nobody got hurt.”

Gibbs Eagles’ Head Coach Brad Conley echoed Cummings on the importance of staying injury free. “Our goal tonight is to get out of here without getting anybody hurt,” he said. “This is something as a coach, kinda scares you to death. I’ve seen too many occasions where a kid gets hurt in a jamboree and can’t help his team when it matters the most,” he stressed.

All teams left the field Thursday night with no major injuries. Week 0 starts this week for seven of the Central Kick-Off Classic teams with Gibbs and Carter playing a Thursday night game televised on MyVLT at 7 p.m.