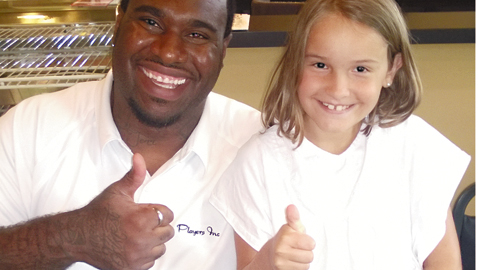 And if you are a NFL football fan, add Jovan Haye to that list. Haye played for the National Football League for seven years, including three years with the Tampa Buccaneers and two years with the Tennessee Titans. Only 9 in 10,000 high school senior football players ever play for the NFL.

But first, Haye had to overcome his biggest challenge of all – severe dyslexia. He credits two extraordinary high school teachers who helped him “let go of dyslexia and learn other ways to learn.” Haye, who struggled through elementary and middle school, finished High School as a member of the National Honor Society, and graduated from Vanderbilt University.

Haye was in Knoxville last week for a book signing at Cozy Joe’s Café in Hardin Valley. He shared his story of overcoming dyslexia, and signed copies of his book “Bigger Than Me,” which he gave to all those in attendance.

Today Haye is a husband, proud father, and owner of a successful business. He said “God blessed me with Dyslexia” and brought an inspiring message of hope to a room full of children, parents, and Knox County teachers.

Dyslexia is the term for learning disabilities in reading. The National Center for Learning Disabilities explains that Dyslexia is a language processing disorder that can hinder reading, writing, spelling and sometimes even speaking. Children and adults with dyslexia simply have a neurological disorder that causes their brains to process and interpret information differently.

Much of a child’s classroom activity is based on reading and writing, so early identification of dyslexia is very important. With proper diagnosis and using alternate learning methods, children with dyslexia can achieve success.

Dyslexia effects 1 in 5 students, 20% of Knox County students have some form of dyslexia

Jovan Haye was invited to speak in Knoxville by Jules Johnson of Decoding Dyslexia TN, and Jennifer Nagel, parent advocate and founder of the soon-to-be launched CORE, Center for Representation and Education. The Center will focus on advocacy, tutoring and training in the areas of dyslexia, dyscalculia (learning disabilities in math) and dysgraphia (learning disability in writing).

Both Jules and Jennifer have children with dyslexia, and have struggled to find the resources for their children in Knox County Schools. Tennessee schools do not specifically test for dyslexia, but they will do an evaluation to see if a child qualifies for services. The trouble is many children with dyslexia will not qualify for services or accommodations. The small percentages who do qualify are often not placed in a program that has been researched based specifically for dyslexia.

As enacted, this law “requires the department of education to collaborate with institutions of higher education to formally address dyslexia and similar reading disorders by providing K-12 educators and teachers web-based or in-person training, providing effective instruction for teaching students with dyslexia using appropriate scientific research and brain-based multisensory intervention methods and strategies.”

But the state Department of Education has interpreted this law to only apply to training teachers still in school, and would not require training for the 4000 Knox County teachers currently in the classrooms.

Deputy Commissioner of Education Kathleen Airhart said last week that the department “did not want to require one more thing that districts had to do during in-service.”

Look for Jennifer Nagel and Jules Johnson to continue to advocate for these services in Knox County so that Knox County Schools can truly offer Excellence for Every Child, including the 20% who have some form of dyslexia. If you want to get involved, you may contact Jennifer at jranagel@comcast.net.