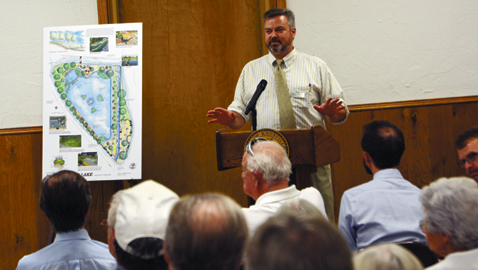 Photo by Dan Andrews.
David Hagerman explains the what the city has done so far to deal with problems at Fountain City Lake. Knoxville had allocated $250,000 to bring the lake back to life.

Fountain City residents packed the Lion’s Club house Tuesday afternoon to hear an update and plans for restoring the Fountain City Lake. Mayor Madeline Rogero recalled the $250,000 allotted last year for repairs and reminded everyone that while the city doesn’t own the lake or the park, she felt a need to help the Lion’s Club with its efforts.

“They do great work in our community and don’t have deep pockets. I know the value of this lake to this community,” the mayor said.

She said the city’s effort so far, to stop the leaks and repair the walls of the lake, was known to not be enough.

“We knew there was more that needed to be done,” she said.

With that she introduced David Hagerman of the city’s engineering department who told the large audience he gets questions every day about the lake and its future. He said the upcoming work will involve the city, TVA, TWRA and other agencies. Maintaining the park will require the assistance of private companies, volunteers, businesses, visitors and park users to be successful.

“How we use the park is important,”  he said.

Hagerman detailed some of the plans including backfilling the banks, placing new sidewalks, and adding carp to the lake for algae control. He also said the plan includes adding a fish screen with mesh small enough to let small fish enter and leave from First Creek but large enough to contain the large carp.

Other plans include decreasing the fowl population, possibly planting grass between the walks and the lake, and discouraging the feeding of the birds with bread.  He said the algae growth is a direct result of the excrement from the fowl.

Jason Brooks of environmental engineering firm LDA Engineering detailed some of the plans.  The steps include draining the lake this fall and mucking it out, reducing the water fowl population, installing a new fountain system and its plumbing, and stocking the lake with carp and tilapia and later with bass and blue gill.

Once repairs are completed by next summer, the engineering firm is proposing a manual be developed and left with the Lions Club about maintaining the lake. He said sidewalk management is important as well and that a wetland area in the shallow part of the lake is planned which would allow for education programs and improve the water quality.

He said that when completed the restored lake will need a public partnership with monthly and quarterly checks on the ecological system there. He said that only the needed amounts of chemicals would be used to control the algae.