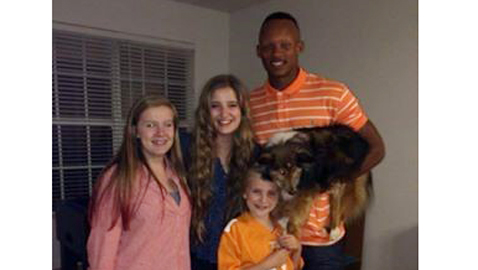 Lizzie, Ali and Caroline (left to right) “fell in love” with UT quarterback Joshua Dobbs when he visited the home of David Fisher, his mentor during his internship in May. Dobbs also was fond of the Fishers’ dog, a Sheltie named Titan.

Butch Jones may be Joshua Dobbs’ head football coach, but Fountain City native David Fisher was his mentor this past May.

The University of Tennessee quarterback and aerospace engineering major spent the month as an intern with Pratt & Whitney-United Technologies in West Palm Beach, Fla., where Fisher is Senior Test Engineer.

The company produces jet engines for the United States Department of Defense for use in fighter jets.

Fisher, a UT graduate and longtime Vol football fan, not only got the opportunity to mentor Dobbs, he got to bring him into his home to meet and spend time with his family.

“Josh Dobbs is a very intelligent young man with great possibilities other than football,” said Fisher, a graduate of Knoxville Central High, Class of 1982. “He is a well mannered person with a kind, pleasant demeanor.”

Fisher, who has been with Pratt & Whitney since 1987, graduated with honors from the UT College of Engineering with a BS in Mechanical Engineering. He has had UT season football tickets for decades, and kept them even after he moved to Florida last year.

Fisher’s parents and sister (John, Barbara and Angel) still live in Fountain City. His first cousin, Scott Galyon, was a standout at UT (1992-95) and also played in the NFL.

Barbara Fisher, also a fan of “Astro,” Joshua’s nickname, kept up with the goings on involving the Vols’ QB and her son.

“Josh came to David’s house for dinner,” she reported. “The whole family was impressed with him.”

That included David’s wife, Julie, and daughters, Alison (17), Lizzie (14) and Caroline (9), who all “fell in love with him and took lots of ‘selfie’ pictures with him.”

Caroline spread the news, too.

“The youngest daughter was so impressed and excited to have a ‘famous’ football player from Tennessee coming to dinner, she invited all the neighborhood children to meet him and play football,” noted Barbara. “They came with plenty of footballs for him to autograph, and he was kind and patient with all of them and signed them all.

“After dinner, Josh tossed football with them and swung them around and played with them. He impressed them all. He also loved their dog, a Sheltie named Titan.”

When Dobbs prepared to leave after dinner, there was an emotional moment Barbara heard about and shares.

“David’s wife, Julie, started to shake Josh’s hand and thank him for coming. He said ‘Oh no’ and hugged her. She almost cried.”

A couple of weeks later, after returning to Knoxville, Dobbs touched his mentor, too.

“David received a text from Josh, wishing him a Happy Father’s Day,” Barbara heard. “Josh has made a friend for life.”

David called mentoring and meeting the talented UT quarterback and bright young gentleman “an opportunity of a lifetime, and an experience he will cherish forever.”

Coach Jones may have Dobbs back, but the Fisher family feels close to him, too.