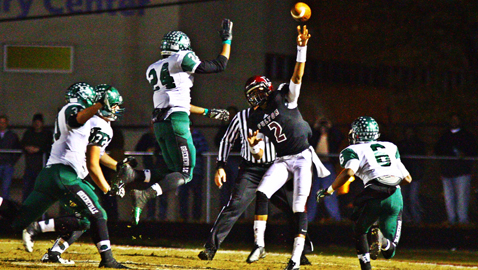 With Greene Devils all around, Fulton southpaw quarterback Penny Smith unleashes a pass in the Falcons’ 40-20 Class 4A playoff win Friday night over Greeneville. Photo by James Spears / SPEARS PHOTOGRAPHY

It was officially a quarterfinal game, but going in some said Fulton vs.Greeneville could very well be for the state championship.

The defending champion Falcons and Greene Devils were both undefeated and No. 1 and No. 2, respectively, in the Class 4A state rankings.

With so much possibly at stake, it wasn’t a good time to not be at full strength. But that was the case for Fulton in the TSSAA playoffs last Friday night, as star running back Daryl Rollins-Davis, just 10 yards shy of 2,000 yards rushing for the second time, was sidelined with a lower leg injury.

Seniors Xavier Hawkins and Penny Smith picked up the slack by hooking up for three touchdown passes.

Sophomore De’Ontay Tate stepped up in the rushing department and twice powered his way into the end zone.

And alert and opportunistic play by its special teams and defense did the rest.

With Rollins-Davis looking on, Fulton turned in a near-perfect performance to move past Greeneville 40-20 before an overflow crowd at Bob Black Field.

“Obviously, we had another tailback in there,” said head coach Rob Black. “We ran a little more Wildcat stuff with Xavier. We threw it a little more than we’ve thrown it the past two weeks. I thought Penny had a heck of a game.

“Being able to change your game plan because of Daryl Rollins-Davis being out, it sure helps when you’ve got Penny Smith and Xavier Hawkins.”

Tate rushed for 137 yards on 18 carries and scored on runs of 22 and 4 yards in the fourth quarter.

“De’Ontay runs it really hard,” said Black. “He’s not a flashy guy. He’s not a guy that’s going out there to get style points. He just runs it really hard and aggressive and has good feet, good balance and good vision. We had a tremendous amount of confidence coming into the game with him.”

Fulton (13-0) will host Knoxville Catholic (10-3) in the semifinals this coming Friday night. The Irishmen advanced with a 14-13 win at Hixson.

“Against a team like Fulton you’ve got to get the momentum early,” said Greeneville Coach Caine Ballard. “Credit them. They played pretty much mistake free. Before we get to go out on offense we had a big turnover on the kickoff and they capitalized on it.

“Fulton has just incredible speed, size and strength for a high school football team. They look like a small college team.”

In the win, Fulton set a new TSSAA record for most points scored in a season. The Falcons are now at 767. The former mark of 748 was set by Greeneville in its 2010 state championship season. Smith, who completed 9 of 21 passes for 237 yards, threw 37 yards to Domonique Williams to give Fulton a first down at the Greeneville 27 on its opening possession. Three plays later, Hawkins hauled in a 31-yarder on a skinny post route for a 7-0 lead.

The Greene Devils fumbled the ensuing kickoff and Lennox Roper pounced on it at the Greeneville 34. Smith hit K.J. Roper for 16 yards and Tate ran 12 yards to the 11 before Smith weaved his way to paydirt. Fulton led 13-0 with 5:48 showing and Greeneville’s offense had yet to be seen.

The Greene Devils muffed the next kickoff and had to start from their 10-yard line.

A 40-yard pass play from Zack Finchum to Quan Harrison got Greeneville going and Quan Wilson capped a 90-yard drive with a 7-yard run, the first of his three touchdowns in the game.

Greeneville faked a punt from its 46-yard line in the second quarter but failed to get the first down. With a short field, Hawkins took a short pass from Smith, broke two tackles and went 43 yards to score. Adam Diggs’ 2-point pass to K.J, Roper made it 21-7.

A pair of dandy defensive plays by Williams prevented Greeneville from scoring late in the second quarter. First, Williams ran down Finchum at the Fulton 13 after a 49-yard gain by the Greeneville QB. Four plays later, Williams recovered a fumble.

Fulton struck quickly, with Hawkins scoring on a 78-yard pass play to make it 28-7. The pass was underthrown, but Hawkins came back to get it and the defender lost containment.

Greeneville put together a 14-play, 61-yard drive to start the second half to pull within 28-13.

But the Greene Devils shanked a punt that went only 6 yards in the fourth quarter, giving Fulton the ball at the Greeneville 22. On first down, Tate, who calls himself an “old school” running back, exploded down the left sideline and banged into the end zone, making it 34-13.

The Greene Devils got within two touchdowns again (34-20) with 5:21 left in the game but couldn’t execute a successful onside kick.

Kenny Marsh ended Greeneville’s final threat with an interception in the end zone.