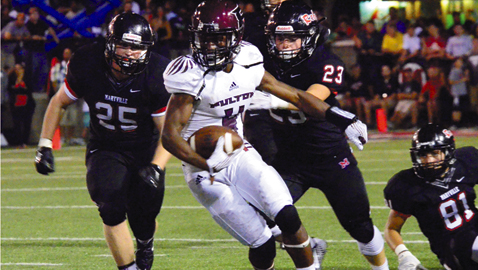 PHOTO BY COURTNEY RADER
Fulton junior wide receiver Zach Dobson made some big plays against Maryville in the
Battle of Champions despite a 49-18 loss. Red Rebels Dylan DoLozier (25) and Tyler
Zwolinski (23) chase the fleet Falcon.

Maryville smacked Fulton in the mouth right at the start, stunning the Falcons and their large turnout of fans, who were on hand for the Battle of Champions.

Fulton responded with a punch of its own, letting the Red Rebels quickly know this wasn’t going to be as easy as maybe they first thought.

From that point on, the game that fans had been longing for over the past two seasons was indeed a battle, at least up until the final quarter, when Maryville finished with a flurry.

Had this high school football showdown of defending state champions been a heavyweight prizefight, judges most likely would have scored it a unanimous decision.

Maryville came into the clash having captured the past two Class 6A state championships and riding a 31-game win streak. Fulton, Class 4A state champ three years in a row, had won 37 straight.

It was one of the most publicized regular season matchups in East Tennessee prep football history.

So big, in fact, you could close your eyes and just hear Michael Buffer announcing, “Let’s get ready to rumble!”

Tough Maryville linebacker T.D. Blackmon cut down Chaton Mobley, Fulton’s 6-2, 242-pound fullback, for a 3-yard loss on the opening play from scrimmage. The Falcons had to punt after two passes fell incomplete.

Jordan Ervin broke loose for back-to-back runs of 27 and 35 yards to put Maryville quickly in the end zone. Matthew Cone’s first of seven PAT kicks made it 7-0 with 10:37 on the clock.

Such was the start.

On their third possession, the Falcons drove 53 yards in seven plays. De’Ontay Tate scored on a 7-yard blast up the middle. The first of three unsuccessful extra-point attempts left Fulton trailing 7-6. But the Falcons were back in the game.

Head coaches of both teams – Maryville’s George Quarles and Fulton’s Rob Black – spoke highly of their opponents after the game at Jim Renfro Field in Maryville on Saturday night, Aug. 29. The game was played before an overflow crowd and a TV audience.

“I told everybody this is the Maryville machine,” said Black. “We won’t play anybody any better than that.”

“I don’t think the score was a good indicator of how close this game was. It felt like to me, going into the fourth quarter, it was one of those that could go either way.”

Mobley powered in from the 1 to pull the Falcons within two (14-12). Freshman quarterback Xavier Malone’s 41-yard pass to Zach Dobson was the key play.

A 34-yard kickoff return and 3-yard TD catch by Joel Hopkins increased the Rebels’ lead to 21-12.

Fulton threatened just before halftime after Kentel Williams raced 44 yards out of the Wildcat formation. But Blackmon batted away Malone’s pass in the end zone.

Maryville’s other quarterback, Dylan Hopkins, scored on a 41-yard keeper at the start of the second half to make it 28-12.

Fulton overcame some adversity later in the third quarter. Mobley had a TD run nullified by an illegal formation penalty and Williams dropped a TD pass on the following play.

Fulton hit paydirt when Williams later ran 23 yards to the Rebels’ 23 and Mobley bulled over from three yards out to trim the deficit to 28-18 with 2:34 remaining in the third.

Maryville executed a trick play to convert a third-and-14 at the Fulton 37 and it led to Michael Hall’s 11-yard TD run on the first play of the fourth quarter.

The Falcons couldn’t answer this time, seeing their drive stall at the Rebel 29.

Maryville’s Cameron Russell caught a pass from Ensley in the flat and followed a wall of blockers for a 41-yard TD play. Matt Young recovered a Fulton fumble to set up the Rebels’ final score – a 5-yard QB keeper by Hopkins.

“What a crowd, what an atmosphere,” Quarles said. “If you care anything about high school football in East Tennessee, you should have been here at this one. Lot of fun for our kids. Lot of fun for the coaches.”

Like most prizefights, there will be a rematch next season at Fulton.