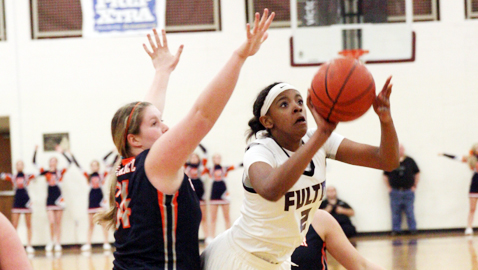 Fulton sophomore KeKe McKinney splits two Grainger defenders to put up a shot in the Class AA sectional game. The Lady Falcons’ season came to an end with a 59-46 loss at Jody Wright Arena.

Grainger High turned out to be too tall of an order for Fulton High’s girls to get past in their bid to return to the state basketball tournament this season.

“I think their length – how big they were – was a tough matchup for us,” said Lady Falcons coach John Fisher, after the Lady Grizzlies erased an early deficit to eliminate Fulton 59-46 in a Class AA sectional game at Jody Wright Arena on March 2.

“If we didn’t make shots, I felt like it was going to be tough, because they were so big. We didn’t hit as many shots as we needed to. I think that was the difference.”

Sophomore guard Karli Combs, niece of Grainger head coach Justin Combs, also hurt the Lady Falcons as she gunned in a game-high 18 points. But it was the insertion of 6-3 junior reserve center Marisha Hipsher into the Grainger lineup that made it tough for Fulton.

“Hipsher also was able to, with her size, neutralize No. 2 (KeKe McKinney) somewhat, as much as you can, because KeKe is a great player,” said Combs.

With the win, the Lady Grizzlies (27-6) qualified for the state tourney for the first time, after suffering sectional losses each of the past three seasons, including a controversial defeat at Fulton last year when the Lady Falcons scored the winning basket after play was allowed to continue after an inadvertent whistle.

“I’m at loss for words right now, sorry, said Lamb, fighting back tears. “We worked our butts off for the past four years to get where we are. It’s amazing what kind of feeling this is and how happy we are to all share it together.”

Lamb said this year’s squad was playing for past Grainger teams, too.

“We wanted to show what this program is made of and how much we appreciate the program and the girls that were here before us and what they mean to us.”

How last season’s game ended at Fulton was a motivational factor, added Lamb.

“I didn’t want to play G-P,” she said. “I wanted to play Fulton, because I knew it was our turn, and we had to get a payback because of what happened last year.”

With only one returnee with experience back, nobody really gave Grainger much of a chance of making it back to sectionals this year, much less ending up in the state.

“I think we let that fuel our fire as much as anything,” said Coach Combs.

Fulton jumped out to a 9-2 lead as Grainger struggled with turnovers early. The Lady Falcons led 15-9 at the end of the first period.

Hipsher’s second basket inside capped a nine-point run by Grainger to start the second period. Fulton would never lead again. It was 27-21 at halftime.

Hipsher was a force down low through the first four minutes of the final period. Her basket inside made it 46-38. She followed that by blocking a shot on the defensive end, and Hodge bombed in a 3-pointer to give Grainger a 49-38 command with 4:15 remaining.

Thomas hit a 3-pointer from the top of the key to make it 53-44 with 3:00 left, but after that Fulton’s basket seemed to have a lid on it as shots just wouldn’t go down.

The Lady Falcons lost four good players, said Coach Fisher, and returned only two starters – Thomas and McKinney – from last year’s team, which made it to the state finals before bowing to Elizabethton.

“Looking at the season as a whole, I think they did well,” said Fisher. “I was pleased with winning the region. I would have liked to have made it to the state tourney like all coaches do. But it wasn’t meant to be.

“I thought the kids played hard. We had to beat CAK and Gatlinburg-Pittman on back to back nights to win the region championship. I’m proud of the kids. We didn’t reach the state tournament, which is a goal, but we won the region, which was another goal.”

Falcons and Red Hawks to clash

Fulton will be seeking its first appearance in the boys state basketball tournament finals since 2009 this week.
Coach Jody Wright’s Falcons came from behind in the fourth period to win at Elizabethton 64-50 in a Class AA sectional game last week.
Kentel Williams, returning from an ankle injury, led Fulton with 19 points, five rebounds and two steals. Joe Kimber and Yasmond Fenderson also played key roles in the victory.
Fulton (26-4) plays the Creek Wood Red Hawks (33-1) out of Charlotte in Thursday’s Class AA quarterfinals at 7 p.m. (EST).
Fulton won state titles in 2009 and 2008. The Falcons also were state runners-up in 1962, 1996 and 1998…