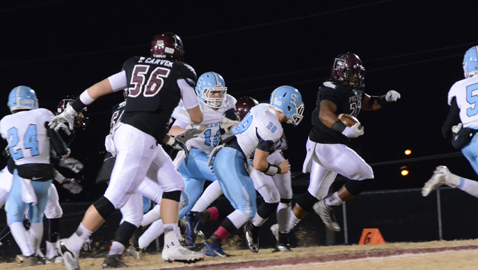 PHOTO BY COURTNEY RADER
Fulton’s D.J. Campbell is on the loose in the Falcons’ 49-14 win over Sullivan South in Class 4A quarterfinal action Friday night at Bob Black Field. Tackle Tripp Carver (56) gets down field to help block for Campbell.

The Fulton Falcons spotted the Sullivan South Rebels a brief 7-6 lead Friday night at Fulton, but it didn’t last long. Fulton reeled off 43 straight points on its way to a 49-14 victory in the third round of the 4A playoffs.

Dominique William’s and K.J. Roper each had two touchdowns for Fulton. Williams scored on a 23-yard touchdown run for Fulton’s first touchdown of the game and a 76-yard punt return just before halftime.

Roper’s  28-yard touchdown catch gave the Falcons the lead for good at 12-7; the Falcons converted the two-point conversion for a 14-7 lead. Roper’s second touchdown of the game put Fulton up 42-7 in the second half and got the mercy rule going with continuous running of the clock.

In the first quarter, the Rebels took the lead on a 35-yard touchdown pass from Dylan Wieger to Will Blair. When Roper scored for Fulton to take the lead, the Falcons began their big play touchdown streak. Fulton shook off a fumbled punt by stopping the Rebels on fourth down. Zach Dobson broke up two passes in a row.

It didn’t take long for the Falcons to take advantage. Diggs found Kentel Williams streaking down the left side of the field for a 65-yard touchdown with 6:45 left in the second quarter, giving the Falcons a 21-7 lead.

“We just ran a quick out route, and we executed,” Williams said of the touchdown.

Fulton would stop Sullivan South to get the ball back. Immediately, it scored again as Chaton Mobley ran for a 30-yard touchdown run and a 28-7 Falcon lead.

That’s when the backbreaker occurred. Sullivan South was trying to run out the clock and get to halftime, but Fulton called a timeout and made the Rebels punt it. Dominique Williams showed his elusiveness as he returned the punt 76 yards with 1:12 left in the half to put Fulton up 35-7.

“We felt like getting a quick start was a must for us,” Fulton Head Coach Rob Black said.

By opening up their scoring in the first half, Fulton cruised in the second half. Following a big Kentel Williams’ punt return into Rebels’ territory, Diggs lofted a 6-yard touchdown pass to Roper, his second touchdown of the game. The mercy rule took effect with continuous running of the clock since Fulton was up by more than 35 points.

Fulton’s defense limited Sullivan South to 136 total yards and 12 yards rushing. Fulton’s numbers weren’t that much better at 263 total yards, but its quick scores made up for it.

Wieger got a last minute touchdown for Sullivan South on a one-yard touchdown run to make the final score 49-14 Fulton.

The Falcons will play at undefeated Loudon Friday night in the state semifinals. “They’re 13-0 right now, have a really good running back and obviously a stingy defense,” Black said. “Every week they (games) just get tougher and that’s the way it’s supposed to be in the playoffs.”