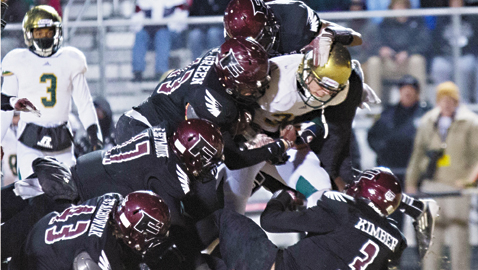 PHOTO BY JOHN VALENTINE
A flock of Falcon defenders put the stop on a Catholic player in Fulton’s 51-14 playoff victory Friday night at Bob Black Field.

The freezing temperatures didn’t bother Rob Black during the game.

“I guess it was because of my adrenalin,” said the Fulton High head football coach, who started feeling the effects of the cold as he left the field and headed inside.

The overall play of his team probably had something to do with it, too.

The Falcons performed like it was late September, using their team speed to run away from Knoxville Catholic 51-14 in the second round of the TSSAA Class 4A playoffs Friday night at Bob Black Field.

Fulton, extending its state-best win streak to 33 games, will host Sullivan South (11-1) in the state quarterfinals this Friday night at 7. The Rebels of Kingsport advanced with a 21-20 win over highly-regarded Greeneville.

“This was a good one for us,” said Black, evaluating where this victory fit among the team’s 12 wins. “It was evident our guys learned the game plan on both sides of the ball this week, bought into it and executed it. Hats off to our kids.

“I thought we won all three phases of the game – offense, defense and special teams.”

The contest was a rematch of last season’s 41-34 Fulton state semifinal win.

The big, run-through sign the Fulton cheerleaders held up before the game turned out to be a sign of things to come: “Careful What You Wish For.”

Junior running back De’Ontay Tate gashed the heralded Fighting Irish defense for 171 yards and scored Fulton’s first touchdown after big and fast D.J. Campbell broke loose for a 93-yard run to the 2-yard line early in the contest.

A 55-yard punt by Catholic punter Jake Poczobut backed up the Falcons again, but Kentel Williams hauled in a 64-yard TD pass from Adam Diggs as a Catholic defensive back went for the ball and came up empty handed.

The Falcons led 20-7 after one quarter and 30-7 at intermission.

Fulton senior Domonique Williams took over after halftime, scoring three touchdowns – a 65-yard punt return, a 34-yard catch-and-run with a screen pass and a 43-yard run out of the Wildcat formation after the Falcons’ quarterback left the game with an ankle injury.

Coach Black said after the game Diggs’ injury didn’t appear to be serious and probably could have re-entered the game, if the score had been close.

“It sounds like he’ll be fine for our next game,” said Black.

Chaton Mobley was a goal-line vulture for the Falcons, scoring TDs on runs from the 1 and 2-yard lines after K.J. Roper caught passes of 43 and 13 yards from Diggs.

Damon Lawson contributed a 23-yard field goal early in the second half and had six PAT kicks.

“Their speed is striking,” he said “you see it on film, but it really doesn’t do it justice. When you see it in person, they’re just extremely fast at all positions.

“But we still had chances to make plays. We just didn’t hit them. We’ve just got to continue to grow as a program.”

Catholic senior Dom Souder, who had a 29-yard TD catch in the third quarter, said mistakes on defense – not wrapping up on tackles and miscommunication on coverages in the secondary – were costly.

“We didn’t see anything like their speed all year,” he said. “It was hard to keep up with at times. I don’t think we did awful, but if you miss a tackle, they’re going to break it.”

Catholic’s first TD, which cut Fulton’s lead to 13-7, came on a 62-yard pass from Zac Jancek to Amari Rodgers after an apparent misalignment in the Fulton secondary left the Irish sophomore wide open and he slipped out of a tackle.

Fulton’s defense gobbled up six Catholic turnovers. Kentel Williams picked off two passes. Roper and Mobley had one interception each. Tate and Matthew Gayle each recovered a fumble.

With Fulton ahead 23-7, a 12-yard sack by Gayle on fourth down ended a Catholic threat in the third quarter.

Jancek, under heavy pressure most of the night, completed only 8 of 33 pass attempts.