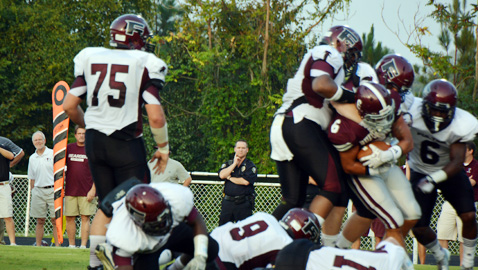 Photo by Dan Andrews
Fulton’s defense gangs up on Bearden running back Malichi Horton in the first quarter of a 52-0 win over the homestanding Bulldogs Friday night. D.J. Campbell has Horton wrapped up as Elijah Clark (6) moves in.

Bearden won the first two minutes of its football showdown with Fulton Friday night, but after that it was all Falcons.

The showdown turned into a blowout.

Fulton, defending Class 4A state champion, left Bearden with a 52-0 win on its resume, its second straight victory over a Class 6A opponent and its second shutout in a row. The Falcons, who breezed to a 46-0 victory at Powell in their opener, look forward to playing at rival Austin-East this week.

The Bulldogs dropped to 0-2 and hope to bounce back against visiting Heritage.

Bearden’s Hunter Henry recovered the Bulldogs’ opening kickoff at the Fulton 40 to give their fans something to cheer about early..

“It was a little sky kick, a little bloop kick to the sideline,” said Fulton Coach Rob Black, adding he kind of expected Bearden might try something like that.

The Bulldogs picked up a first down at the Fulton 27, but transfer running back Malichi Horton had the ball popped loose on the next play and defensive back Xavier Hawkins scooped it up, turned on the jets and took it to the house. His 82-yard return down the sideline – right in front of the Bearden bench – and Josh Coleman’s PAT kick gave Fulton a 7-0 lead with 9:51 on the clock.

“Our guys really feed off of momentum,” said Coach Black. “That was one of those big plays, and we can make them with special teams, on offense or defense. That one happened to be a defensive play. It led to more momentum.”

Daryl Rollins, another fleet Falcon, put on a show on the next Fulton possession and scored from the 1. He later added scoring runs of 91 and 35 yards.

The Falcons were up 28-0 at halftime and 42-0 after three quarters.

With the clock running continuously because of the mercy rule and reserves mopping up, Fulton did get a chance to give its field goal team some work and Coleman connected from 27 yards out. Sophomore De’Ontay Tate tacked on a 13-yard touchdown run with 2:50 to go.

“The team play was great,” summed up Smith, Fulton’s senior QB. “We had a hard week of practice. We just came out and fought and fought and then we just finally started bustin’ ‘em. The hard work paid off.”

Bearden Coach Brad Taylor was impressed with the Falcons.

“They’ve got speed that’s hard to defend,” said Taylor. “I think it’s a really good team . . . I’d be really surprised if they’re not back in Cookeville this year.

In addition to their opening kickoff recovery, the Bulldogs also failed to cash in on Blake Ironside’s interception and 34-yard return to the Fulton 36 late in the second quarter. They ended up punting and backing Fulton up to its 9-yard line.

Rollins, getting a key block from 6-7, 327-pound senior tackle Akeem Cooperwood, went the distance on first down to put an exclamation point on the first half..

Coach Black greeted Cooperwood as he came off the field.

“That’s an excellent job by you of picking up that blitz right there,” he told Number 74.