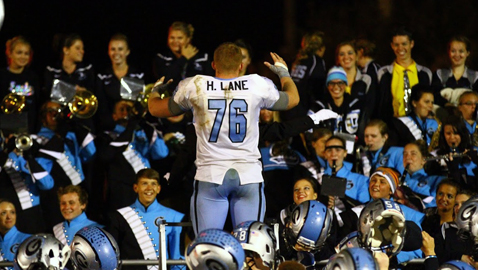 Gibbs High’s football team took care of business Friday night and kept its playoff hopes alive. In the process, a struggling Powell program took another hit in its final home game of the season.

The tone was set early. The Eagles recovered a Powell fumble on the opening kickoff and cashed it in for seven points before the first cup of hot chocolate had cooled enough to sip.

It didn’t get much better for the Panthers, who have been hit hard by injuries this season and saw their head coach suspended from his coaching duties just hours before their Oct. 17 game at Oak Ridge.

Gibbs reached mercy rule requirement by halftime and coasted to a 39-6 win.

“I know this has been a community that’s struggled (in football) this year, but it’s still Powell,” said Gibbs Coach Brad Conley. “So our kids were excited . We feel like we’ve got a lot to play for. Our kids have come out and played hard every week this season. I wouldn’t have expected anything else tonight.”

“I feel pretty good that if Gibbs wins Friday night, we’re going to be in the playoffs,” said Conley, whose team qualified for post-season play in 2013, its first year in Class 5A.

“We have a game (this) week that’s going to define us,” said Preston Booth, Gibbs senior quarterback who had touchdown sneaks of 1, 2 and 2 yards and a 49-yard TD strike to wide receiver Ethan Warden in the win over Powell.

The Panthers (1-6, 1-8) had issues with their kicking game most of the night.

Powell muffed the ensuing kickoff but it didn’t turn out to be costly as Gibbs eventually fumbled it back.

The Eagles, however, got the first of two safeties when Powell’s punter inadvertently stepped back out of the end zone after receiving a snap to punt. That made it 16-0.

With good field position again after the safety, Gibbs covered a short field (34 yards) and extended its lead to 23-0.

Booth hit Warden in stride on the long TD pass to make it 30-0.

The Panthers were snowed under at their 13 on the ensuing kickoff return. Gibbs’ Matthew Rudbal intercepted sophomore quarterback Jacob Kirby’s first down pass and returned it to the Powell 5-yard line. Booth tallied from the 2 three plays later to make it 37-0 with 1:25 left in the half.

Gibbs punted for the first time and Powell finally got its initial first down as the third quarter started with a running clock. The Panthers quickly gave the ball back, however, when they fumbled the snap in the shotgun. The Eagles couldn’t capitalize as Hawkins missed a 41-yard field goal attempt wide left.

Nick Dorsey’s tackle in the end zone gave Gibbs its second safety with a minute to go in the third quarter.

Powell drove 75 yards in eight plays against reserves in the fourth quarter to keep from being shut out. Jamil Birden got 52 of it, including the TD from the 3. The PAT kick was blocked.

Neely, an offensive line coach and offensive coordinator previously this season, said about 15 starters have been hurt during the season, including the first and second-string quarterbacks. Kirby started the year as the junior varsity QB.

“We’ve played several offenses this year. This is the first week that we’ve settled into the same look – a spread with more of a power look. Continuity is the big thing that were lacking.

“I just appreciate the kids,” added Neely. “I’ve got a senior on the team myself. These kids have went from the state championship game their freshmen year to the state semifinals their sophomore year. They’ve had five head coaches including me in four years.

“It’s been kind of chaos with the continuity. They’re real disappointed, but they’re playing hard.”

John Allen, in his first season at Powell, was placed on administrative suspension from his duties as head football coach Oct. 17, according to Melissa Ogden, public affairs officer with Knox County Schools.

A news release from the county’s Central Schools Office said, “Coach Allen has been placed on administrative suspension from coaching pending the outcome of an investigation into allegations of unnecessarily placing students at risk of injury.”

If the head coach’s position becomes open, Neely might seek the job.

“That’s something I’m going to evaluate at the end of the year,” he said following the loss to Gibbs.

Powell will play its final game of the season Friday at Campbell County.