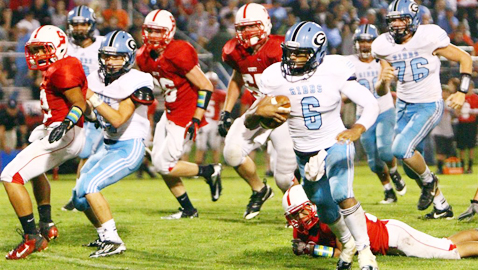 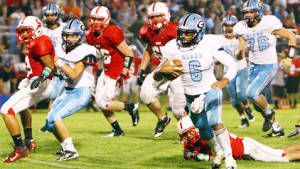 Eagles senior quarterback Jay Cade ran for three touchdowns and threw for another to lead Gibbs to a 41-14 victory over the Highlanders.

“We felt like our kids responded well after halftime,” Gibbs coach Brad Conley said. “You have one first game every year and it’s better to start 1-0.

“It’s good to get a win and now, we see that there’s room for improvement.”

At halftime, the Eagles and the Highlanders were locked in a 14-14 tie and Conley used the break to remind his squad to get back to the basics.

“We didn’t tackle well in the first half and we had two turnovers on consecutive series and one of those turnovers led to a touchdown,” Conley said. At halftime, we went back and talked to the kids about what we talk about all the time.

The Eagles obviously listened to their veteran coach and outscored Scott 27-0 over the final 24 minutes.

Cade, the Eagles’ veteran quarterback, had 17 carries for 291 yards and scored three times on the ground. He had touchdown runs of 45, 84 and 54 yards respectively.

On defense, junior Skyler Lane had an interception while Keaton Cupp and Brandon Norton were among Gibbs High’s leading tacklers.

“I haven’t seen our tacking numbers yet but Cupp and Brandon Norton [both defensive ends] did a great job defensively,” Conley said.

The Eagles will play their home opener Friday night against Claiborne. Kickoff is slated for 7:30.

Claiborne lost its season opener to Cocke County 32-12 last week and remains a mystery to Conley.

“I don’t know anything about them,” Conley said. “I know that they had a pretty good quarterback last year and he was a senior.”