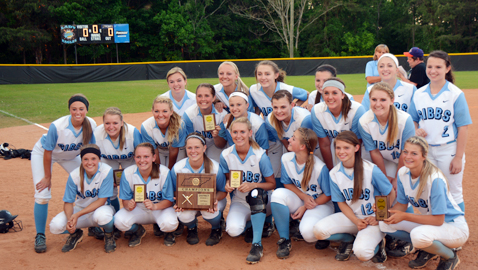 Gibbs High School set out on the softball diamond to prove a point Wednesday night.

The Lady Eagles, who ruled the roost in District 3-AA in the past, moved into Class AAA in 2014 and they responded by winning another district championship.

Gibbs claimed its first-ever District 3-AAA Tournament title with an 11-1 five-inning victory over third-seeded Powell before a packed house at the Gibbs High School Softball Field.

“This feels really good,” said longtime Lady Eagles’ coach Carol Mitchell, who recently won her 700th career game to open the tournament. “With us moving up, we had some naysayers who said we would struggle.

“One of our underlying goals was to make the region. We won the district and now we have a top seed.”

Gibbs, which won the district tourney as the No. 2 seed, found itself behind the Lady Panthers (who eliminated top-seeded Halls 14-13 earlier in the day) early.

Powell (32-18) took a 1-0 lead in the top of the second when first baseman McKenzie Bedwell hit a solo home run.

After that, however, Gibbs scored 11 unanswered runs. The Lady Eagles pulled even in the bottom of the frame when catcher Sarah McFarland had an RBI single that plated Cheyenne Boles with the tying run.

The Lady Eagles took the lead with two runs in the bottom of the third inning. Tournament MVP Faith Lowry led off with a single and stole second. She stole second before advancing to third on a bunt by Kaitlyn Trent. Some heads-up base running landed Trent at second base on the play.

Lowry, who went 4-for-4 with four stolen bases and three runs, scored when Karri Byrd lifted a sacrifice fly to left field to make the score 2-1. Trent later scored on a single by Boles, the Gibbs third baseman.

The Lady Eagles blew things open when they scored six runs in the bottom of the fourth. Byrd had a two-run single. Kaitlyn Beeler walked and was lifted for pinch runner Chloe Martin, who would score on a wild pitch. Boles had a two-run double and Beeler had an RBI double. When the dust had settled, the Lady Eagles had a 9-1 lead.

Gibbs ended things in the bottom of the fifth when Trent hit a two-run homer over the left-field fence.

“Everybody said that we only went to state every year because we didn’t play anybody but these girls have all worked hard,” she said. “We just came in and worked hard every day and put our hearts into it.”

While Gibbs proved its point, the loss was far from devastating for the Lady Panthers, who travel to Maryville for a Region 2-AAA Tournament game Tuesday at 5 p.m.

“Gibbs just came out and really swung the bats against us. We had an emotional roller-coaster ride against Halls [in the loser’s bracket final] where we executed and got a big out.”