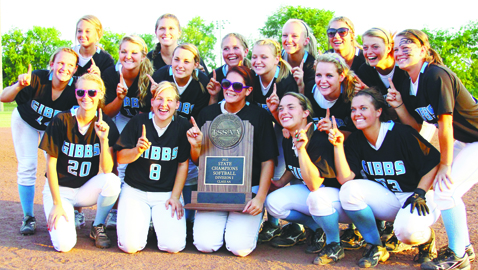 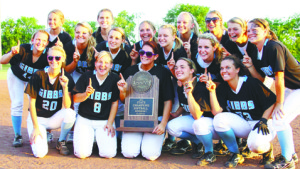 The satisfaction of working for something special and accomplishing it – a state championship – isn’t going away anytime soon, if ever, for members of Gibbs High School’s 2012 softball team.

When the Lady Eagles turned in their uniforms last Tuesday, tears of joy were still being shed.

This group of players probably would have liked to have kept the uniforms, even as they were – dirt, sweat and all.

“They didn’t want to give them back,” said Coach Mitchell.

Gibbs doesn’t have to part with the memories of its 2-0 victory over Goodpasture on Friday, May 25, in the TSSAA Class AA state finals in Murfreesboro. It was the school’s ninth state title in softball but first since 2000.

Seniors on the team could have been in kindergarten the last time the Lady Eagles won the gold.

“They knew it had been a long time,” said Mitchell. “They’re all very aware of the tradition of the softball program.”

This Gibbs team had a special identity.

“They are very blue collar,” said Mitchell. “Some of my teams in the past have just been better than everybody else, period. (As for) this team, by no means could you look at us in the beginning of the year and even in the middle of the year and think, ‘Well, they’re just better than everybody else.’ They worked hard. I think that’s why they are so passionate about the championship. They’re still in tears, and we’re four days after the fact. And they are still crying because, I think, there’s a satisfaction they saw that when we work hard and we improve, then this is what can happen. And it did.”

Gibbs’ approach was to focus on the process, not the end result.

“We lost four talented girls from the previous year,” said Mitchell, looking back on how the season started. “You never know at the beginning of the season what type of leadership you’re going to have. Are other girls going to step up and take those positions? We had to move some people around and make some adjustments, but everybody was willing to play their role and be part of the team.”

Samantha Smith, Gibbs’ No. 1 pitcher for four years, limited Goodpasture to two hits, did not walk a batter and struck out four in the finale. Goodpasture did not get a base runner past second and was set down in order in five of the seven innings.

Gibbs struck for its first run in the second inning. After two outs, Kaitlyn Trent and Ashley Swaney singled and Karri Byrd doubled to right field to drive in Trent.

The Lady Eagles got an insurance run in the bottom of the sixth. Dani Jefferson singled, moved to second on Savannah Foster’s sacrifice bunt and to third on Cheyenne Boles’ double before scoring on a passed ball.

Gibbs will have “a good core group” returning next season, said Coach Mitchell. “We still have to replace the four seniors.” That includes Smith, “who pretty much dominated the second half of the season.”

Rachel Farmer will take over on the mound. She had a 10-0 record in varsity play as a freshman.

“Hopefully, we can work her enough this summer that she will be ready to step right in and not miss a beat,” said Mitchell.

“People are probably going to move positions,” added Mitchell. “It happens every year. It’s like a puzzle and you just got to find the right fit.”

This season’s puzzle turned out to be a picture of a championship team.