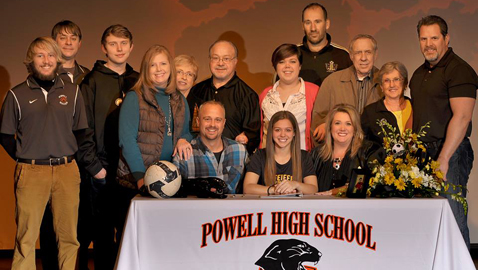 She made that official recently when she signed to play collegiate soccer at Pfeiffer University in North Carolina.

Gilley, a two-year captain for the Lady Panthers, was a first-team all-District 3-AAA performer during her senior season and was named to the second team as a junior.

At Pfeiffer, she will pursue a degree in Special Education. Gilley said that it was important for her to stay close to home and reside close to a major metropolitan area.

“It is close to home, about four-and-a-half hours away,” Gilley said in a statement. “It has my major, Special Education and is also close to a big city.

“It is about 40 minutes north of Charlotte.”

“The [women’s] soccer team won the Carolinas Conference last season and is on their way to building a very good program,” she said. “Elijah Denton is the head coach and his team is where I want to be.”

She also noted that her future teammates played a role in her decision.

“All the girls made me feel right at home and they made me feel like they wanted me to be there,” Gilley said.

She also said that she found the campus and the soccer facilities aesthetically pleasing.

“I will never forget how I was practicing at the Open Event and during the scrimmage, as I was looking around the field and the scenery, I knew then and there, that Pfeiffer University is where I was meant to be,” she said.