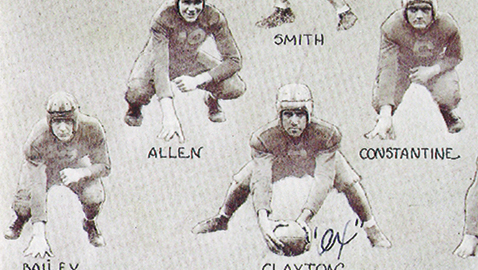 A page from the 1931 KHS yearbook recognized the “football stars” of its 1930 national championship team and also showed the “first team” in formation. It was high school football in the days when players did not wear face masks.

Her last students walked through her halls over 60 years ago, and her facade now reads “Historic Knoxville High School.” But she is more than a beautiful landmark. She remains a symbol of perseverance.

Many of her kids, like others throughout the nation, went to school during time of world war or the Great Depression or both. Some interrupted their studies to go and fight for their country, then came back to finish school. They persevered in what was a tumultuous time.

Knoxville High’s classic, three-story school building, on the corner of Central Avenue and East Fifth Avenue, was built in 1910. But it looks like Norman Rockwell painted it there.

Some of Knoxville’s most prominent citizens were KHS graduates.

In athletics, Knoxville High, according to Wikipedia, was known for many years as a powerhouse, winning a total of 13 state titles, six Southern championships in football, as well as national championships in 1930 and 1937.

For most of the first half of the 20th century, the high schools in Knoxville were KHS, Rule and Stair Tech. County schools included Central and Young. Central, in fact, was sometimes called “County” high school.

The original KHS building opened with 646 students in attendance. Enrollment quickly grew. An addition to the building in 1914 made it possible to increase enrollment to 1,337 students. KHS enrollment grew to just over 2,000 in the early 1920s and reached a peak of about 2,300 around the beginning of World War II.

Evans-Collins Field, the site of many football games in Knoxville for years until replaced by the present day Caswell Park softball complex, was named in honor of W. E. Evans, principal of KHS from 1917 until its closing in 1951, and longtime KHS football coach Wilson Collins.

One of Knoxville High’s best stretches of football was the three-year period of 1929 through 1931. The Trojans lost only one game in 1929 with Captain Talmadge “Sheriff” Maples, an All-Southern honoree, and Kenneth “Stumpy” Needham leading the way. On Thanksgiving Day, the Trojans won over “their age-old rival” – County – 13-0.

The 1930 campaign was extra special. The Blue and White hung up a 13-0 record and claimed its first national crown. The Trojans gave up only two touchdowns all season, outscoring their opponents by a combined total of 592 points to 12. KHS beat rival County 37-0 in the final game.

With only four varsity members back in 1931, the Trojans, which entered several games as underdogs, still posted a 10-1 record and captured their fourth consecutive state title. Twenty-three players were awarded their football “K’s” at the end of the season, including veteran guard Joe Foster, who also received the Henry G. Trent Trophy as the “most valuable man” of the season. Captain Sam Sharpe, outstanding halfback, was re-elected captain for the 1932 season.

Johnny Butler, known for making one of the greatest touchdown runs in University of Tennessee football history, was a star half back on Knoxville High’s 1937 team. Sporting a 9-0 record, Coach Collins sought a “worthy opponent” for Thanksgiving Day game, one that would test his team in its pursuit of a national title.

That foe would be Newport, Ky., which had won the past two Kentucky state titles and also was known for its flashy offensive play. It was not unusual for the Kentucky team to pass or lateral the ball three or four times in a play. Assistant coach Sam Jones said its style sometimes “looks almost like a basketball game” after scouting Newport.

Knoxville High beat the Wildcat team 14-0 at Smithson Field and earned the right to the national title the next week by completing its season with a 25-0 win over the Miami Stingarees in a game played at the Orange Bowl.

Butler and “quarter” Tony Carper were recognized as All-Southern on the 1937 team. Senior teammates, who also had been pictured in The Knoxville Journal prior to the Trojans’ last home game, were end Larry Partridge, half back Elvis Wade, tackle Park Standridge, guard Willis Tucker, back Clifford Clendenen, back J. C. Reagan and tackle Joe Billig.

Knoxville High also was recognized as state champion in 1942, 1943 and 1944 in the Tennessee Litkenhous Ratings.

A review of the season in the Trojan yearbook included capsule game reports, including the lone 7-6 loss to Young High: “The Trojans were finally defeated by a determined bank of Young High Yellowjackets. High School’s offense couldn’t click against the bitter cold and the ‘Jacket’ line.”

Knoxville High bounced back with a 20-7 win over Manual, Ky., and trounced Central 40-7 on Thanksgiving Day, 1950, in the annual “City-County Game.” The game was traditionally played at UT’s Shields-Watkins Field, but the last meeting ever between the two rivals, which reportedly attracted 12,500 fans, was played at Evans-Collins Field because of construction at UT.

Thus, the final review in the 1951 Trojan yearbook read:

“Good old KHS finished her last football game in a blaze of glory.”

Recalling KHS times in 1941 on and off the field

When driving west on I-40 through downtown Knoxville, one can see old Knoxville High School just off to the right.

Back in the 1940s and earlier, Knoxville High wasn’t surrounded by the hustle and bustle of city life as it is today.

“That area was like a small community, a rural area,” Bill Birchfield, a senior on the 1941 KHS football team, recalled recently. “There were lots of housing with the school in the center. A lot of families. It didn’t have the city look to it at all. That was only found around the Tennessee Theatre area and in the Gay Street district.”

Birchfield transferred to Knoxville High from Chattanooga Central during his junior year after his father had finished working on Chickamauga Dam and moved the family to Knoxville to start working on nearby Douglas Dam.

Birchfield said his sister, Bobbie, was a freshman and had to enroll at Young High, since Knoxville High had only grades 10 through 12. Bobbie became a cheerleader at Young and was rooting for the Yellow Jackets in the fall of 1941 while her brother was on the KHS team.

“We beat them 39-0 at Evans-Collins Field,” said Birchfield. “I’ve got a funny antidote about that game, too. We started out by scoring 21 points without running a play from the line of scrimmage. We had a punt return for a touchdown, returned an interception for a touchdown and ran another punt back all the way. Hank “Slick” Fonde had the two punt returns. He went on to star at Michigan.”

Birchfield was a backup blocking back for the Trojans, playing behind Orvis Milner, who went on to star at UT.

“He kept my ass on the bench,” said Birchfield, “and I returned the favor in basketball as we won the state championship. The state tournament was played that year at Maryville High in their new gym.”

Bill Wright, who later in life became the head baseball coach at Tennessee, was a star on that state basketball championship team, said Birchfield. “We depended on him. He was our leader.

“Bill was a tremendous athlete, a standout in basketball and baseball. And he was a fine fellow all the way around. He went to Duke as a Marine recruit. He lettered in basketball at UT and then at Duke after his military service.”

Birchfield, who graduated from UT in 1950 after 3½ years in the Navy, added that Buster Stephens was “another one of the best to come out of KHS” in football. “He was a tailback for General Neyland after being All-Southern in high school.”

The Trojans only lost one game in 1941, a 7-0 decision to Central, said Birchfield, who recalled Gus Manning, former UT assistant athletic director, being a “star tailback” for Rule High. “We beat them handily, but our school was twice as big,” he said.

Was there a popular hangout for Knoxville High students back in 1941?

“Directly across the street (from Knoxville High) there was a drug store where all the kids also hung out. It had booths and stools.”

What about after a big football game?

“Highland’s Grill in West Knoxville,” said Birchfield was the place. “It was behind where Long’s Drug Store is now.”

Wasn’t that kind of far to go?

“We had automobiles and streetcars,” laughed Birchfield. “Automobiles were always full of kids back then. Everybody had to chip in to pay for the gas.