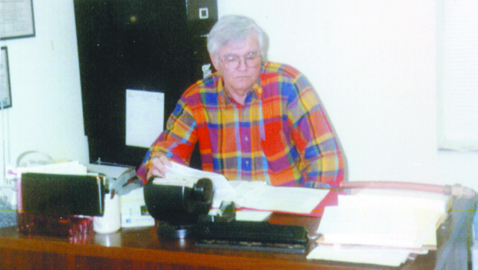 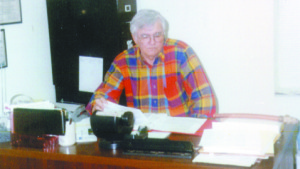 A 1996 picture of Bill Greene at his desk in the LBC utility office taken during the time he worked there.

He held the forked peach tree stick in his hand and walked slowly. The end of the stick jerked and pointed to the ground. It indicated the largest vein of water lay beneath the ground right where the stick pointed. Our paternal grandfather was the one holding the Y-shaped stick from the peach tree. He was performing the art of water witching, which is locating water beneath the ground. Water witching, also known as dowsing, has been used for years.

I was in school the day our grandfather used his water witching skills to find a site to dig a well on the place where our parents were building a house. As my parents told it to me, I was amazed. To have been able to see him “water witch” would have been an education in itself. Years later, the term “water witching” came up in one of my classes at the university. I was the only one in class who knew what it meant. But for my grandfather, I would not have known either. He had done water witching for many of the neighbors over the years when we lived on the farm. It was common in our rural area for people to dig wells on their property for their source of water. For nearly twenty years, our grandfather’s finding of the precious liquid hidden beneath the ground sufficed nicely for our family. The well supplied water not only for our household but for a small barnyard of farm animals, also. One day, just weeks before Christmas, however, the well on our farm dried up. We determined the best option was to sign up for utility water. For three weeks during the holiday season, we hauled buckets and barrels of water from our neighbors’ homes. It was a welcome relief when the process was completed and water was finally piped into our home—though it came at a tidy sum. Knowing what it is like to finally get utility water in a home gives me an appreciation for those who work in the water industry, like Mr. Greene.

Bill, as he is known to his friends, has dedicated many years of his life to providing water to homes in several East Tennessee communities. Water is one of the most valuable resources and commodities on earth. It is necessary to sustain life. Man can live without food much longer than he can live without water. It seems likely that a man who spent four years serving his country in the

United States Navy would choose a lifetime of work in the water industry. Bill also had a thirty-year career with the Home Beneficial Life Insurance Company. But, Bill’s family tells me that providing water to homes was so important to him that he spent more than two-thirds of his time working toward that end. Starting in 1962, water commissioners were appointed for each county in our rural area: Knox, Union, and Grainger. Bill was appointed to represent the Union County district. Water commissioners receive compensation for their work now. However, there was no pay to go with the demanding position when Bill was first appointed. Often, the commissioner post required him to spend many nights working in the communities. Bill did whatever was necessary to help people, even providing financial assistance if it was needed.

In 1987, Bill was tapped to be the District Manager, a paid position, for the LBC Utility which includes parts of Union, Grainger, and Knox Counties. He used his managerial skills to run the utility and even brought it out of the red during his tenure. Through his management, Bill spearheaded the effort to obtain and own property in Luttrell for a new office/maintenance building. Prior to that, the utility had offices in three different smaller buildings. He also spearheaded the acquirement of property in the Graveston Community, where the lake is now, for the LBC Treatment Plant and added several additional springs on Tazewell Pike. Before his retirement, he worked tirelessly to obtain the land easements to pipe utility water into the Washburn area from Luttrell. He daily inspected the work of the contractors. Bill also applied for and received several federal grants for the district. The water company was run totally off of three different springs until it tied on to the Northeast Knox Utility, which is used as a backup in times of water shortages. What great strides took place from the time Bill Greene started out as an unpaid water commissioner until the day he retired as the District Manager!

Bill Greene has left his mark in a market that serves all of us—with something we all need.

Whenever I turn on the faucet, pour a drink of water, or run water through a garden hose these days, I try to not take it for granted. I often stop and think how fortunate we are to live in a place where we can enjoy safe water. I am reminded that behind the stream of clear flowing water was a dedicated man like Bill Greene, a man who worked tirelessly through the years to ensure water was piped into homes.

These days, Bill no longer works on a mission to provide water to homes. He is retired from the water industry and Home Beneficial. Bill and his wife, Melba, have been married fifty-nine years. They continue to live in the Gibbs Community and attend Cedar Ford Baptist Church in Luttrell where he has also served as a deacon. Bill and Melba are the proud parents of three sons, Sherrell, Ted, and Wynn, who have outstanding careers in their own rights and highly admire and love both of their parents. They also have five living grandchildren. There were six, but Josh Greene’s life was taken by a drunk driver at age sixteen. At eighty-one years old, Bill Greene has made a wonderful contribution to his fellowman by his service in the Navy, the insurance business, and the water industry; by his leadership in his church and community; and all the while being a husband, father, and grandfather. What a legacy this family man has created and what an inspiration he is to those who know him! One of those who knows him best is his oldest son, Sherrell. This highly-skilled nuclear engineer is a story all his own. He did not need to draw from his nuclear knowledge, however, when reflecting on his father; and he needed no technical terms in his touching tribute—only words of admiration, respect, and love. Sherrell has authored numerous publications, but none so important as the memories he writes of his father. The following words he shares are from his heart, and that is a language we all can understand:

“Especially during the early years of the Luttrell Blaine Corryton Utility District, there were numerous problems with piping that had been installed incorrectly by the contractor. Water leaks were numerous – especially during those cold, frozen winter nights. Countless times over the years, our phone would ring in the middle of the night and the voice on the other end would say something like, “Bill, we’re out of water over here, can you help us?” – the caller hoping Dad could work his magic to restore their service before morning. I can’t tell you how many times I saw my Dad get out of bed, put on his warmest clothes, and spend the remainder of the night searching for the leak and arranging for its repair. Then he would return home (usually cold, wet, and muddy), take a quick bath, and head off to his job at Home Beneficial – the job that was putting bread on our table. Dad was a “volunteer”, un-paid, “jack of all trades” for the water district for over twenty years. We didn’t even receive free water. Dad paid our water bill, and more than once, paid water bills for other folks out of his own pocket. I’ve never witnessed such sustained sacrifice and community service by another person. Needless to say, I am proud of my Dad.”