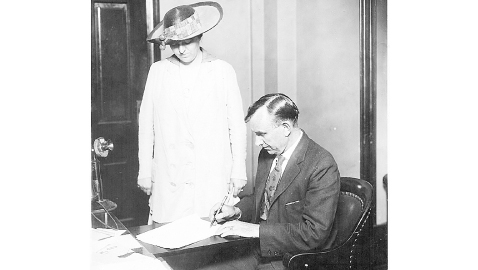 From the author’s personal collection.
Governor A. H. Roberts signs the certificate of ratification of the Constitutional amendment giving women the right to vote, 1920.

There is likely no more fickle mistress than that of politics.  Political success for any person is always a combination of many things, not the least of which are timing and good fortune.  Momentary popularity can be washed away in a tide of ill fortune, bad timing, misreading the public mood or just down right ineptitude.

Albert Houston Roberts was an example of a politician who suffered from a series of events that drained his popularity.  Roberts was governor of Tennessee from 1919-21 and served only one two-year term.

Born July 4, 1868, just three years after the Civil War ended, in Overton County, Tennessee.  The Roberts family left Tennessee to move to the hamlet of Columbus, Kansas, but Albert Roberts returned to the Volunteer State to attend Hiawassee College in Madisonville.  After earning his degree, Roberts, like many others of his generation, taught school and became the principal of the Alpine Academy in his old home of Overton County.

Ambitious to do better, A. H. Roberts studied law and was admitted to the Bar in 1894 and opened a practice in Livingston, Tennessee.  Roberts was well regarded by his fellow attorneys, as well as his neighbors and was elected to serve as Chancellor of the Fourth Judicial District, which comprised fifteen counties in Middle Tennessee.   While representing so many counties made it an arduous task to campaign for local office, Roberts realized it also provided a good base from which to campaign for higher office.  Roberts became more and more interested in politics and was especially close to former governor Benton McMillin, who was attempting yet another of his comeback bids in 1912.  Republican Ben W. Hooper had been elected governor in 1910 and defeated McMillin to win a second term in 1912.

Roberts made his first campaign for statewide office in 1914, competing for the Democratic nomination for governor, but he lost to Tom C. Rye, who managed to oust Republican Governor Ben W. Hooper.

Rye served two terms as governor and did not seek a third two-year term in 1918, as he was a candidate for the United States Senate against incumbent John Knight Shields.  A. H. Roberts made his second gubernatorial bid that same year and faced a Clarksville lawyer and farmer in the Democratic primary, Austin Peay.

Peay, later elected governor of Tennessee and remembered as a reformer, enjoyed the support of the two most powerful urban political leaders in the state: E. H. Crump of Memphis and Nashville Mayor Hillary Howse.

Roberts and Peay were well matched and it was a relative close race; Roberts carried Knox and Hamilton counties, while Peay carried Davidson and Shelby counties.  Both men were from Middle Tennessee and Roberts managed to eke out a majority of some 12,000 votes, winning with 64,000 to Peay’s roughly 52,000 votes.

Albert H. Roberts defeated the Republican candidate, Judge Hugh B. Lindsay of Knoxville, by a greater margin in the general election.  The country was afflicted that year with a significant outbreak of the flu, a pandemic which infected perhaps as many as 500 million people in 1918.  Some 50 – 100 million people died from the flu worldwide.  It was not an auspicious beginning to A. H Roberts’s term as governor.

Upon taking office, A. H. Roberts found Tennessee’s debt was rising at an alarming rate.

Tennessee’s antiquated tax code was a vexation, favoring the rural areas of the state at the expense of the more urban areas.  Rural legislators frequently boasted they raised the money where it was – – – in the cities – – – and spent it where it was needed, the farms and rural areas of the state.  Governor Roberts quickly set about restructuring some of the outdated laws and was delighted to sign a bill which allowed the Tennessee Railroad and Utilities Commission to actually collect taxes on railroads and utilities.  The legislation also allowed the State of Tennessee to update the assessment of property owned by both railroads and utility companies.

Unfortunately for Governor Roberts, another innovation was less popular with much of the public.  Roberts signed a bill which provided for a “sliding scale” of taxation on personal property and overall the tax burden on individuals was reduced, while still producing more revenue for the state.  The sliding scale was especially unpopular with farmers, a significant voting bloc inside Tennessee’s Democratic Party.  Not surprisingly, it was also unpopular with many business leaders.

Governor Roberts performed a happier duty in 1919 when he performed the wedding ceremony for Sergeant Alvin C. York, perhaps the most famous living resident of Tennessee at the time.  Sergeant York was a genuine hero and his exploits in the recent World War were well documented.  The union between Alvin York and his wife Gracie would last decades, unlike A. H Roberts’ political career.

The governor’s political woes continued in the form of strikes, which broke out in Knoxville and Nashville, at the Knoxville Railway and Light Company and the Carter Shoe Company, respectively.  Governor Roberts immediately sent the Tennessee State Guards to stop the strikes, which naturally infuriated labor.

Roberts also was caught in a quandary over ratification of the Nineteenth Amendment to the United States Constitution, which gave women the right to vote.  All attention was focused upon Tennessee when it became apparent should the Volunteer State ratify the amendment, it would become part of the Constitution.  A bitter battle erupted in the state legislature, with both sides mobilizing support and opposition to ratification.  Tennessee’s junior United States senator, Kenneth D. McKellar, was an outspoken advocate of giving women the right to vote.  E. H. Crump, leader of the potent Shelby County political machine was also a leading proponent of women’s suffrage.

Governor Roberts had campaigned in 1918 on a platform, which opposed giving women the right to vote.  Roberts rightly feared if women were enfranchised, they would retaliate against him in the 1920 election.  The governor finally capitulated and the battle was hard fought and despite attempts by the House Speaker to maneuver ratification to death, Tennessee became the state that added the Nineteenth Amendment to the Constitution of the United States.

Roberts had delayed calling the legislature into special session until after he had successfully won renomination inside the Democratic primary.  Governor Roberts signed Tennessee’s certification of the ratification on August 24, 1920.

Considering the many divisive issues that had beset Governor A. H. Roberts, it is hardly surprising he drew an opponent in the Democratic primary in 1920.  Chattanooga Mayor William R. Crabtree announced he would challenge Roberts for renomination and ran a campaign blistering the governor.  Many farmers and elements of organized labor, albeit not much of a force in Tennessee politics, opposed the governor’s renomination.

Crabtree did not prove to be an especially strong candidate and Roberts won the nomination with almost 68,000 votes to Crabtree’s almost 45,000 votes.

Governor Roberts faced a serious Republican opponent in the general election in the form of Alf A. Taylor, a former Congressman and a veteran of Tennessee’s political wars.  Brother of the late governor and United States senator Robert Love Taylor, Alf had once contested his sibling for the governorship in what came to be known as the “War of the Roses”, with each candidate’s supporters sporting either a red or white rose in his lapel to indicate support for his favorite.

Seventy-two years old in 1920, Alf A. Taylor still had the energy to run an effective campaign, putting on quite a show for the voters, accompanied by a hillbilly band and his hunting dog, “Ol’ Limber.” Taylor, an excellent speaker, bitterly assailed the governor’s tax reforms, reigniting the anger of many voters whose resentment still burned brightly.  Tennessee Democrats, sensing they might be in trouble, revived charges of Taylor’s support for a bill sponsored by Massachusetts Senator Henry Cabot Lodge, which would have afforded some measure of protection to black voters.  The attempt to fan the flames of racial hatred did not succeed.

Governor Roberts had managed to alienate virtually every important constituency inside the Democratic Party.  Having been on both sides of the question of women’s suffrage did him no political good either.

Albert H. Roberts, ousted from office, contented himself by establishing a law practice in Nashville.  Originally, Roberts partnered with fellow attorney James W. Cooper, but later formed the firm of Roberts and Roberts with his son and namesake, Albert H. Roberts, Jr.

Roberts did not entirely give up the idea of returning to office some day and when Senator Nathan L. Bachman died unexpectedly in 1937, Roberts formally petitioned Governor Gordon Browning to appoint him to succeed Bachman, despite the fact the former governor was then sixty-nine years old.  Browning ignored Roberts’ petition, choosing to appoint labor leader George L. Berry to the Senate instead.

The former governor still had enough personal and political prestige to have been appointed as a member of a special committee formed to investigate Governor Henry Horton’s ties to Caldwell and Company after the State of Tennessee had lost a considerable sum with the collapse of the that financial institution.

Roberts contented himself to remain an elder statesman and enjoyed a very successful law practice.  The former governor and his wife, Nora, enjoyed their family and friends as they aged.

Buffeted by the winds of political adversity, Governor Roberts did not prove to be especially effective in finessing the many hurdles facing Tennessee during his administration and his political ambitions suffered for it.  Politics is indeed a fickle mistress.