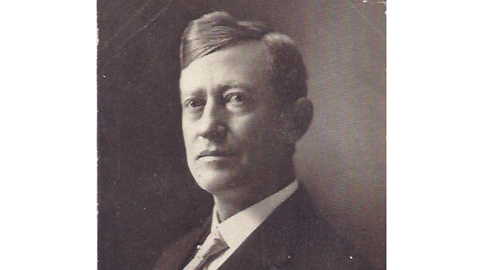 Before the age of television, blue shirts and blow-dried hair, Tennessee had some of the most colorful political figures anywhere. Amongst those was Malcolm Rice Patterson, a Congressman and governor of Tennessee. A veteran of some of the most hard fought political battles in the state, Patterson proved himself adept in overcoming adversity until his own lapse of judgment destroyed his career.

Born July 7, 1861, Malcolm was the son of Colonel Josiah Patterson and his wife Josephine. Colonel Patterson had been a member of the Confederate Army and fought in Alabama and was later to serve as a member of Congress. Originally christened “Hamilton”, Colonel Patterson later changed his son’s first name. Young Malcolm attended Christian Brothers College and Vanderbilt University and prepared for the practice of law by reading the law under his father’s supervision. Malcolm Patterson was admitted to the Bar in 1883 and by 1894 was the attorney general of Shelby County. The fact that his father was the Congressman representing Shelby County likely did not hurt young Malcolm’s candidacy.

Malcolm’s father had first been elected to Congress in 1890 and was reelected until 1896 when a division in the Democratic Party led to his defeat by Edward Ward Carmack. Congressman Patterson was a supporter of President Grover Cleveland and the gold standard; the Democratic presidential nomination had been won by William Jennings Bryan, a young Congressman from Nebraska who had electrified the national convention with his fiery “Cross of Gold” speech and Patterson was out of sympathy with the nominee of his own party. Bryan was an advocate of “free silver” and his own supporters labeled men like Colonel Patterson as “gold bug” Democrats. Carmack supported free silver and won the endorsement of William Jennings Bryan, who proved to be quite popular in Tennessee.

Patterson challenged the election results before the House of Representatives, which was controlled by the Republicans. Many believed the Republicans would seat Congressman Patterson, as he was clearly the more conservative of the two candidates. Carmack was eventually seated and his election ended Josiah Patterson’s political career. Carmack’s attorney was a young lawyer from Memphis named Kenneth D. McKellar.

Malcolm Patterson remained attorney general for Shelby County until 1900 when Edward Carmack vacated his Congressional seat to run for the United States Senate. Carmack was elected to the Senate and Malcolm Rice Patterson was elected to Congress.

Patterson remained in Congress for six years and profited from yet another division inside Tennessee’s Democratic Party. William B. Bate, had just been reelected to a fourth term in the United States Senate, but the elderly senator died weeks into his new term. Governor James B. Frazier quickly called the legislature into special session to elect a new senator and few people were surprised the choice was Frazier himself. Speaker of the State Senate John I. Cox of Bristol became governor after Frazier resigned. Two former governors, Benton McMillin and Robert L. Taylor, had longed to be elected to the United States Senate for years and were infuriated at the swift elevation of James B. Frazier. Taylor angrily denounced Frazier, Speaker Cox, and Senator Edward Ward Carmack and charged they were attempting to control Tennessee’s politics.

Malcolm Patterson determined to run against Governor Cox and it was a bitter battle, which Patterson only won after securing the support of the Davidson County delegation at the Democratic Party convention. Governor Cox sulked, saying he had been cheated out of the nomination and would not support Patterson in the general election, which featured a very credible Republican candidate.

Henry Clay Evans had been a member of Congress until he was redistricted out of office and had been Postmaster General from 1891-93 during the administration of President Benjamin Harrison. Evans had been the GOP nominee for governor in 1894 and had run a strong campaign; so strong in fact, that he appeared to have won the election when the returns came in, but a recount under the Democratic administration later dismissed some votes and gave the election to the Democrat. There was little doubt H. Clay Evans had been elected governor of Tennessee.

H. Clay Evans then was appointed Commissioner of Pensions in 1897 under President William McKinley. Evans served until 1902 when he was named Consul General to Great Britain. Evans remained in the diplomatic service until he resigned in 1905 and returned home to Tennessee.

Evans was a very strong candidate and Patterson resorted to race during the general election campaign. Patterson assailed Evans for his support of a bill in Congress that would have afforded some measure of protection to African-American voters. Patterson spent much of the fall campaign intimating that H. Clay Evans wished to give even more power to black citizens. Malcolm Patterson won by about 20,000 votes out of around 200,000 cast.

Until Malcolm Patterson’s election, Tennessee’s governors had largely resided in hotel apartments and Patterson was the first to occupy a mansion bought for the governor’s use. Patterson did preside over some changes in Tennessee, sponsoring the creation of a State Highway Commission, as well coming out in favor of a ban on gambling on horse races.

Carmack was largely supported by those Democrats who ardently advocated prohibition; Governor Patterson was both personally and politically “wet”. Carmack naturally charged Patterson with being a creature of the liquor interests and waged a fierce campaign against the incumbent fueled by their intense personal dislike of one another.

The divisions in the Democratic Party gave the Republicans some hope of winning the general election, but infighting inside Tennessee’s Republican Party led to two men claiming to be the GOP gubernatorial candidate. An incident in West Tennessee also bolstered Governor Patterson’s personal popularity.

Obion County citizens were engaged in a struggle with the Tennessee Land Company over Reel Foot Lake and a group of men seized two of the company’s officials, one of whom was murdered. Governor Patterson responded by calling out the Tennessee State Guard into Obion County, personally leading the guard member in rounding up many of the “Night Riders”, several of whom were eventually tried for their crimes.

Patterson won the general election but his hard won popularity was squandered over an event that became one of the greatest scandals in the annals of Tennessee history.

Patterson’s former opponent in the recent primary campaign, Edward Ward Carmack, resumed his former profession, working as the editor for the Nashville Tennessean. The redheaded Carmack had a positive talent for invective and he bathed Patterson and the governor’s friends and allies with vitriol from his pen. Carmack’s editorials were so fierce, the former senator’s friends tried to caution him, fearing for his safety. One of those offended by Carmack’s attacks was Colonel Duncan B. Cooper, who was close to Governor Patterson. Colonel Cooper had warned Carmack to cease his attacks in the strongest possible terms.

Carmack had armed himself and encountered Colonel Cooper and his son, Robin, on a Nashville street. Shots were fired and Edward Ward Carmack was left dead in the gutter.

Supporters of the slain former senator were outraged and held Patterson responsible for Carmack’s murder. Both Coopers were tried and Colonel Cooper was convicted despite the fact apparently it had been his son who had fired the shots that killed the former senator. Cooper’s conviction was promptly overturned by Governor Patterson, who pardoned his friend. Patterson had already been accused of abusing the governor’s power to issue pardons on behalf of friends and thousands of Tennesseans were infuriated by his blatant use of his power to pardon what many saw as Senator Carmack’s assassin.

Patterson remained in office, but for the duration of his term, he was politically crippled. Carmack’s death gave impetus to the cause of prohibition and the legislature passed two prohibition bills, which Governor Patterson stubbornly insisted upon vetoing, driving the slain Carmack’s friends and supporters to a frenzy of fury.

Malcolm Patterson, refusing to acknowledge his own political problems, decided to seek a third two-year term in 1910. The divisions inside Tennessee’s Democratic Party were so deep most of the members of the Tennessee State Supreme Court decided to seek reelection as “Independent” Democrats and allied themselves with Republicans. When Patterson’s allies were easily defeated at the polls, the governor finally concluded he had little expectation of being reelected and withdrew as a candidate.

The bitterness between Democrats was so deep and profound, a Republican was elected governor in 1910.

Patterson left office and later made a public announcement he had become a prohibitionist. The former governor had been profoundly embarrassed when it was revealed that he had been caught drunk in a house of ill repute, which Patterson claimed was the result of having been framed. Patterson’s conversion to the temperance cause allowed him to become a paid lecturer on behalf of prohibition.

Patterson attempted to revive his political fortunes when he ran for the United States Senate in 1915. Patterson was challenging the incumbent, Luke Lea, who had been elected by a combination of Independent Democrats and Republicans in 1911. It soon became a three-way race with the entry of Memphis Congressman Kenneth D. McKellar. Few gave McKellar much chance of winning, as both he and Patterson were from Shelby County.

It is the only election in Tennessee history to have a run-off election; Lea lost in the first round of balloting, running third. To most everyone’s surprise, Congressman McKellar had run first, winning in East and West Tennessee. In the run-off campaign between McKellar and Patterson, the Memphis Congressman repeated the feat, carrying both East and West Tennessee again, giving him the nomination.

Following his defeat in the Senate race, Malcolm Patterson practiced law and began writing a column for the Memphis Herald Courier. Patterson came back to elective office in 1923 when he was appointed as judge of the First Circuit Court for Shelby County. Patterson remained in office until he retired in 1934.

Patterson’s last hurrah in Tennessee politics was in 1932 when he again sought to be elected governor at age seventy. Patterson was the candidate of his old foe Luke Lea and it was a sign of Lea’s desperation that he sought to anoint the disgraced former governor as the administration’s candidate. It had been Luke Lea who had employed Edward W. Carmack as the editor for his Tennessean newspaper.

Malcolm Patterson was little more than an echo of the past and Senator K. D. McKellar and E. H. Crump, leader of the Shelby County machine, began their long rule of Tennessee politics with the 1932 election. Patterson was badly beaten and returned to his judgeship in Memphis.

After retiring in 1934, Patterson did not live long enough to truly enjoy his retirement. Visiting Sarasota, Florida in March of 1935, the former governor died suddenly on March 8. Patterson’s body was returned home to Tennessee and he was buried in Forest Hill cemetery.

Malcolm Patterson might very well have enjoyed a much longer political career were it not for his arrogance in pardoning his friend Colonel Duncan B. Cooper. Many politicians have made the mistake of presuming they could do as they please without regard for the electorate. Patterson’s reputation has never recovered from his mistake.