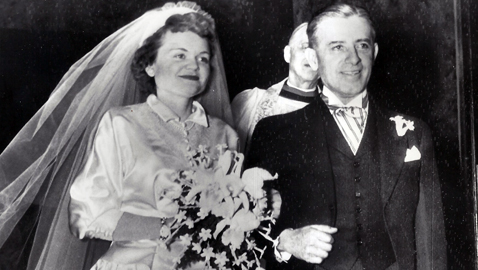 From the author’s personal collection.
Former Governor Prentice Cooper and his bride, Hortense, 1950

Governor Prentice Cooper was seeking a third two-year term in 1942 and found himself hard pressed by his opponent, J. Ridley Mitchell. Mitchell was a wily politician and had served as the Congressman from Tennessee’s Fourth District from 1931-39, leaving office to make a quixotic bid for the United States Senate in 1938. Mitchell could likely have stayed in Congress for the rest of his life had he not opted to run for the Senate. After his defeat in 1938, Mitchell married and moved from Cookeville to Murfreesboro and established a law practice in that city.

Ridley Mitchell was something of a political chameleon, adept at connecting with a voter or group of voters personally. In 1938, Mitchell had very much wanted the support of both Senator Kenneth McKellar and E. H. Crump, leader of the Shelby County political machine. When McKellar told Mitchell whomever he supported would have to run as part of a coalition ticket, the Congressman balked, although there was little reason to believe the senator would have backed Mitchell in any event. Mitchell, fighting a three-way race with District Attorney A. T. “Tom” Stewart and incumbent U. S. Senator George L. Berry, positioned himself as the “harmony” candidate. While claiming not to be part of any faction, Mitchell’s ire with Senator McKellar’s refusal to support him was readily apparent in the Congressman’s oratory that summer. Mitchell’s criticisms were largely reserved for Senator McKellar more so than Crump.

By 1942 McKellar and Crump had dominated Tennessee politics for a decade and Ridley Mitchell’s campaign for governor was pitched to those who objected to boss rule. Mitchell campaigned so strongly against Crump that one would have thought Ed Crump was running for governor instead of Prentice Cooper. Mitchell in fact told audiences, “There are only two candidates in this race – – – Ridley Mitchell and Ed Crump”.

“I think the time has come when the office of governor should be returned to the people and the seat of the government be brought back from Memphis to the state capitol,” Mitchell said.

Governor Cooper replied that he was proud to have Crump’s support and reminded audiences Ridley Mitchell had wanted Crump’s support as well. The governor routinely asked his audiences for a show of hands of those who believed Mitchell would have accepted the Memphis Boss’s support had he been able to get it. A sea of raised hands was the usual response to the governor’s inquiry.

The Memphis Boss had a remarkably thin skin for one who had been involved in politics for more than forty years and Crump fired back, purchasing thousands of dollars of advertising in newspapers all across the State of Tennessee.

The Memphis Boss employed language as flamboyant as his dress, proving he was fully capable of giving a political thrashing as well as taking one; Crump published one advertisement under the heading, “Mitchell voted Against Pearl Harbor”. With the war going badly for the allies, it was still a sore spot with many voters, especially in patriotic Tennessee. Crump reproduced four letters he had received from J. Ridley Mitchell, as well as a telegram where Congressman Mitchell urged the Memphis Boss to meet him at the Peabody Hotel, a none too subtle reminder that J. Ridley Mitchell would have liked the support of the Crump machine for himself.

Crump’s ad opened a new front during the gubernatorial primary, allowing Governor Prentice Cooper to lambast J. Ridley Mitchell as an isolationist. Prior to World War II, Congress had many members who believed the United States should remain aloof from global affairs and especially conflicts between other countries. There were isolationists in both parties, many of whom held prominent positions in the Congress. Idaho’s William E. Borah, the “Lion of Idaho”, shocked President Franklin Roosevelt and Secretary of State Cordell Hull when he dismissed reports received by the State Department, replying he had his own sources of information and there would be no world war. David I. Walsh, an enduringly popular political figure in Massachusetts, was the first Irish-Catholic Democrat ever to be elected governor and U. S. senator from the Bay State. Walsh was also Chairman of the Senate’s Naval Affairs Committee and his loathing of the British Empire and strong support for neutrality legislation made him a powerful isolationist.

California’s Hiram W. Johnson, North Dakota’s Gerald P. Nye, Montana’s Burton K. Wheeler, Indiana’s Frederick Van Nuys, Minnesota’s Henrik Shipstead and several others were all leading opponents of the Roosevelt foreign policy and any form of intervention. The South held less isolationist sentiment than perhaps anywhere else in the entire country and only one senator from the southland could truly be described as an isolationist; Robert Rice Reynolds of North Carolina. Being tagged as an isolationist was a serious political liability in any election in the South and Tennessee was certainly considered a southern state, especially at that time.

Prentice Cooper picked up Crump’s charge that J. Ridley Mitchell’s record while in Congress was isolationist. Governor Cooper reminded audiences all across Tennessee in July and August of Mitchell’s Congressional record with respect to foreign policy, an odd albeit effective issue in a gubernatorial campaign.

While speaking in Kingsport, Tennessee pointed out that during his eight years in Congress, Ridley Mitchell had never voted once for a preparedness measure. The governor also noted during his Congressional tenure Ridley Mitchell never once voted for any legislation benefitting the army or navy, despite repeated requests for such legislation by President Franklin Roosevelt.

E. H. Crump assailed Ridley Mitchell in another huge advertisement with a headline blaring, “J. Ridley Mitchell – Eminent Demagogue”. For good measure, Crump added that Mitchell was a “Terrible Hypocrite – Not A Sincere Bone In His Body”. Once again, Crump reproduced correspondence from the former Congressman, which reiterated Mitchell had strongly wanted Crump’s support and that of the Shelby County political machine.

It is impossible to tell just what impact, if any, Crump’s advertising campaign had on Ridley Mitchell’s gubernatorial campaign, but considering the former Congressman was running hard against Crump and the Shelby County machine, one has to think they made some impression upon voters.

Ridley Mitchell’s own advertisements showed a picture of the candidate, one hand held above his head as he made a speech, with a headline asking, “How Will You Vote?”

Mitchell’s ad went on to point out the United States was engaged in “fighting a war for freedom” and wondered if Tennessee voters would not vote “for that same freedom”.

“Are you going to let Dictators, big and little ones, take Tennessee while your son risks his life fight the axis dictators”? the Mitchell ad inquired.

Mitchell’s advertisement went on to urge Tennessee voters to “crush the Dictators at home!”

Lest anyone misconstrue the message, the ad bluntly urged voters to “Beat Dictator Crump!”

It was not long before Silliman Evans, publisher of the Nashville Tennessean became an issue in the gubernatorial campaign. The Tennessean was strongly supporting Ridley Mitchell for governor and was the leading advocate for Mitchell’s candidacy in 1942. Evans constantly bombarded Governor Cooper for his failure to repeal the poll tax, a proposal that had been supported by Cooper in his previous campaigns. Evidently Evans had gone to Governor Cooper in 1940 and prevailed upon him to make the repeal of the poll tax the administration’s top priority in the coming legislative session. The governor refused and incurred the publisher’s wrath in the next election.

The governor angrily snapped, “There wouldn’t be any opposition in the present campaign except for this one man”.

Silliman Evans had been the strongest supporter in the state of former Governor Gordon Browning and had delighted in opposing both Crump and Senator McKellar, both of whom cordially hated him. Evans denied that he had done more than merely ask the governor to keep his campaign pledge, although there is good reason to believe the publisher fancied himself as Crump’s successor and hoped to have the same kind of influence in Tennessee elections as did the Memphis Boss.

Evans went so far as to claim the governor had said he disliked dogs, a claim Cooper immediately denied.

While E. H. Crump had become an issue in the gubernatorial primary, his warm personal friend and political partner, Senator K. D. McKellar, was busy sending a flood of letters to friends and supporters in Tennessee reminding them he was strongly for both Senator Tom Stewart and Governor Prentice Cooper. McKellar was especially popular in East Tennessee and his alliance with local Republicans paid political dividends for both Cooper and Stewart on Election Day.

What had become a bitter campaign ended on August 6, 1942. Prentice Cooper became only the second man to be reelected to a third consecutive two-year term as governor of Tennessee in almost a century. Still, Ridley Mitchell made an impressive showing and the governor likely had to be both vexed and embarrassed by the fact he had lost his own home county of Bedford to Mitchell.

Mitchell had represented Bedford County in Congress and had been a very popular Member of Congress during his time in Washington. Mitchell beat Cooper by almost 500 votes in Bedford County. Mitchell ran most strongly in Middle Tennessee, winning Davidson County, home of the Nashville Tennessean, by almost 8,000 votes. Governor Cooper carried the three other urban counties, Hamilton, Knox and Shelby by wide margins, although Ridley Mitchell piled up majorities in much of Middle and West Tennessee.

Tennessean had proved over the years to be reluctant to give any governor a third consecutive term and voters were restless all across the country that year, causing many incumbents to lose. Prentice Cooper had won a convincing victory and it was to be his last winning campaign.