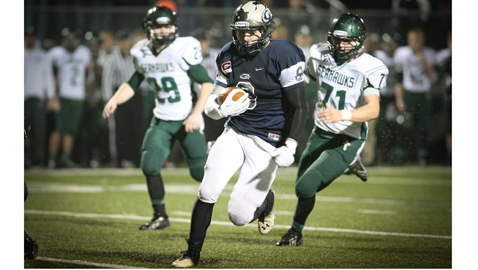 Receiver Andy Eddins is on the move for the Grace Rams in their quarterfinal victory Friday night over Silverdale. Photo by Kara Mckamey.

Grace Christian Academy football coach Randy McKamey threw caution to the wind Friday night and the result was a 49-21 Class 2A Quarterfinal win for the Rams over Silverdale Baptist Academy before a packed house on a cool rainy night.

“When you get to this point in the season, you have to pull out all the stops, said McKamey, who will lead his team into battle against Trousdale County at home this week.

The Rams (12-0) did keep things entertaining. Grace made six fourth-down conversions (including a fake punt) and successfully executed an onside kick en route to eliminating the Seahawks (11-1) for the second straight year.

It was a night full of successful gambles for the Rams, but the Mustangs also had a few tricks up their sleeves. They converted their own onside kick to open the second half and put a monkey-wrench in Grace’s plans — at least temporarily.

Silverdale’s onside kick might’ve caught the Rams off guard but the Seahawks’ drive was stopped when Grace’s Kyron Inman intercepted a pass.

The Seahawks answered a short time later when they found the end zone on a halfback option pass from Colton Rogers to Joshua Rogers that covered 61 yards.

Grace responded when Nathan Silver scored on a 54-yard scamper that made the score 14-7 with 28.9 seconds remaining in the opening frame. Silver’s TD put the Rams ahead to stay but there was still plenty of excitement.

The Rams’ Geoffrey McReynolds scored the game’s next two touchdowns to give the home team a 28-7 lead.

Joshua Rogers had a 6-yard scoring run to pull the Seahawks to within 28-14 with 3 minutes, 9 seconds left in the second stanza.

Grace’s Spencer Green closed out the first-half scoring with a 3-yard plunge to make the score 35-14 with 13.2 seconds left in the first half.

After Silverdale’s onside kick opened the second half, the Seahawks showed signs of life. The pulled to within 35-21 when Lincoln Phillips blocked a quick kick and recovered the loose ball in the end zone.

Grace scored a pair of touchdowns in the fourth quarter. McReynolds’ third touchdown made the score 42-21 with 9:58 left in the game.