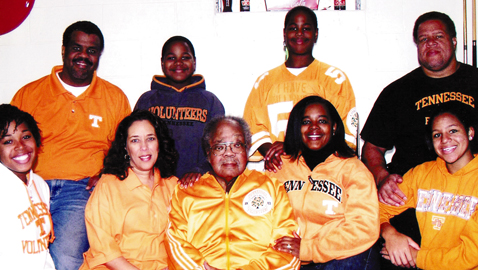 Sam McKenzie Jr. (front row, center) is surrounded by family members in a photo he says was taken “four or five years ago.” There’s no question which college team this family is behind. Back row, from left, son Samuel P. McKenzie, grandsons Jalen and Kahlil McKenzie, and son Reggie McKenzie. Front row, from left, granddaughter Jasmin McKenzie, daughter-in-law Gwen McKenzie, daughter-in-law June McKenzie and granddaughter Mahkayla McKenzie. Reggie and June are parents of the four grandchildren.

Thousands of University of Tennessee football fans are happy that Kahlil McKenzie signed with the Volunteers, but “Granddaddy” is probably the happiest.

Sam McKenzie Jr. is Kahlil’s grandfather and lives in East Knoxville, probably about 10 minutes from Neyland Stadium, where UT fans expect his grandson to wreak havoc for future opposing offenses.

“I’m glad he signed with UT,” said Mr. McKenzie at his home last week. “I didn’t push him. He made his own decision.”

Grandfather wasn’t surprised at all by Kahlil’s decision. He believes his grandson has long had orange blood running through his veins. He thought all along, as the the youngster grew up and made summer visits to Knoxville, that he would be a Vol someday.

Just like his dad, Reggie, and uncle, Raleigh, Mr. McKenzie’s twin sons who played at UT and went on to play in the NFL, after being standouts at Austin-East High School from 1977 to 1980.

Reggie and Raleigh, by the way, were impressive off the field, too. Reggie was Valedictorian at A-E in 1981 and Raleigh was third in their graduating class.

Mr. McKenzie turned 80 on Feb 6, just two days after National Signing Day. There wasn’t a birthday party, but the new octogenarian went out for “dinner” with his youngest son, Samuel P. McKenzie, a Knox County commissioner, and Raleigh McKenzie Jr., who is a senior at UT.

Although Tennessee signed Kahlil as a defensive tackle, Mr. McKenzie said he believes his best position is middle linebacker. “He can play that (DT) too. He can play anywhere on the line.”

You can’t dismiss that comment as just a proud papaw bragging. Too much good football heredity in this family to do that.

Reggie played four years as a linebacker with the Los Angeles Raiders and has been the Raiders’ general manager in Oakland since 2012. He played a total of seven years in the NFL before becoming an executive and director of player personnel in Green Bay’s front office from 1994 to 2011. Reggie received Super Bowl rings as the Packers won the Vince Lombardi Trophy in 1996 and 2010.

Raleigh was a hog in the Washington Redskins’ offensive line for 10 seasons and won Super Bowl rings in 1987 and 1991. He’s now a scout with the Raiders. Raleigh played a total of 16 seasons in the NFL.

Mr. McKenzie was a center and defensive guard at Chattanooga Howard High School in the early 1950s. He said he was a “pretty good” player but didn’t receive any football awards or play college football.

He worked for years and retired from the State Department of Human Services.

Mr. McKenzie still resides on Lilac Avenue, where he and his late wife, Janie, made a home in 1965 and raised their three boys.

“My yard was the neighborhood playground,” said Mr. McKenzie, remembering those times when his sons were growing up.

And it still was a ball field when Kahlil and Jalen were in the 8 to 10-year-old range and visiting from their home in Green Bay during summertime.

“They’d get out there in the backyard and play basketball and a little football with the neighborhood kids,” recalled Mr. McKenzie, who also made trips to Green Bay to visit, when Reggie worked in the Packers’ organization.

“When Reggie and Raleigh were playing, me and my wife saw all their games at UT. And a lot of times we’d get in the car and go where they were playing on the road or take the fans’ bus.

“After they went pro, we didn’t go to too many UT games, because we’d be going where they were playing. If Reggie was playing, we’d fly to California and go to the Raiders game. And most of the time we’d drive to Washington when Raleigh and the Redskins had a game. We kept busy just going back and forth seeing them play.”

Mr. McKenzie said he was sure Jalen, a member if the Class of 2017, would be signing with UT, too. He said Jalen told him he would be. That’s more good news for Tennessee fans.

Jalen will be a junior this season at Clayton Valley High in Concord, Calif. One recruiting service, 247 Sports, has him listed as a 6-5, 285-pound offensive lineman who already has received an offer from Miami. He also was a nose guard and defensive tackle as a sophomore last year.

Meanwhile, Mr. McKenzie looks forward to having Kahlil in Knoxville and coming over for visits. Kahlil last saw his granddaddy when he was on an official visit to Tennessee. Raleigh Jr. gave his cousin a ride to East Knoxville.

“I’m just happy he signed with UT,” said Mr. McKenzie. “I’m sure he’s going to play well for them, and I’m sure he will play pro ball, if things go well and barring injuries.

“I’m just happy he’s going to be here in Knoxville. He’ll probably come over and we’ll hang out together some Sundays.”

Maybe watch a little football on TV or talk about backyard games on Lilac Avenue.