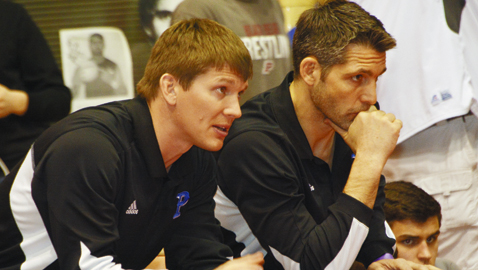 Photo by Dan Andrews.
Page High School wresting coach has made the school program into a power house. The former Halls wrestler and assistant coach brought his Patriots to the Halls Invitational recently.

Wrestling has always been a family affair for Benji Gray and ironically, it was family that sent the 2000 Halls High School graduate to Nashville.

Gray, who wrestled for the Red Devils and was later an assistant coach at his alma mater under legendary coach Chris Vandergriff and Shannon Sayne, went to the Midstate six years ago when his wife got a job in Music City.

“It was my wife who got me to move to Nashville,” said Gray, who recently returned to Halls over the Martin Luther King Jr. Holiday weekend as coach of the Page High School wrestling team, which participated in the Halls Invitational.

Gray didn’t have to wait long to find a job in Franklin.

“The athletic director at Page was Jack Daniels,” Gray said. “He used to be a football coach at Halls and he heard that I was coming.”

Gray inherited a wrestling program that was barely surviving.

“They were about to cancel the program. When I got there, they only had six wrestlers,” Gray said. “They were really on the brink.”

Times have changed at Page. In his six years at the school,” Gray, who was once a mascot at the University of Tennessee, has built the Patriots into a wrestling powerhouse. The Pats are 24-3 in dual meets and a top team in Class A/AA. Page currently has 24 wrestlers and is ranked No.1 by recent wrestling polls.

For Gray, the Halls Invitational was more than a mere homecoming.

“We were at Brentwood [recently] and I was talking to the coaches at McCallie and Brentwood and we were saying that [the Halls Invitational] was the toughest tournament in the state this year,” he said. “It’s tougher than our Class A/AA State Tournament.”

Gray wrestled for the Red Devils but in 1999, Gray’s father Benny founded the wrestling program at Union County High School and under Benny’s leadership and with the help of other coaches through the years, Maynardville’s Patriots became a flourishing program. Benny had help from guys like Jason Moorman (now the head coach at King University), Arnie Cohn and Rudy Furman (now an assistant football coach at Hardin Valley Academy). With their work, Union County enjoyed success in the early days.

The one person who didn’t go to Maynardville was Benji, although he had a chance to move over the county line.

“During my senior season, there was talk that I might go to Union County with my dad,” Gray said. “But I stayed here at Halls and as it worked out, he was in just about every tournament that I was in. So I always got to see him.”

Benji has had many positive influences in wrestling such as Sayne and Vandergriff, who is widely known as the sport’s biggest ambassador in East Tennessee. But it was Benny who got his son on the mats.

“He has always supported me,” Benji said of his father. “He introduced me to the sport and he was always happy to see his son have success.

“He always wants to see kids happy and see those kids have success.”

Benny’s involvement has pretty much ceased but during his time, he was one of the sport’s most endearing personalities and colorful characters.

Benji inherited some of his dad’s personality. After high school, he was a Tennessee mascot and that gig netted him a full college scholarship.

“I was a mascot at UT and that got my education paid for,” said Benji, who is an elementary school physical education teacher at Sunset Elementary School in Nolensville.

The younger Gray left Halls six years ago and he said that the decision didn’t come easily. He and his wife Allison, however, have found a home in the heart of the Volunteer State.

His stint as a UT mascot still continues to pay dividends. He’s a Nashville Predators fan and one of his friends is a mascot for Tennessee’s National Hockey League franchise and that gets him into many Preds’ games and he’s enjoying the team’s success.

“I’m a big Preds fan and my friend is a mascot for them, so I really don’t have to pay for much of anything,” he said.